The financial crisis has put to the forefront the long-debated issue of banks’ capital adequacy, showing that banks were much more fragile than they (and their regulators) pretended, also because they were allowed to push their leverage to levels much higher than any industrial company, or even a hedge fund, has never dreamt of.

Since then, both governments and the markets have contributed to a substantial increase of banks’ capital in all countries, the Basel regulation has been thoroughly revised, and at long last a cap on banks’ leverage has been introduced. Regulators, both in the US and Europe, are now focussed on convincing the markets that banks are currently robust enough to weather significant external shocks, either macroeconomic or financial. The stress tests that the US ran for the first time in 2009, and Europe will replicate in 2014 (after the overdue realisation of the Single Supervisory Mechanism), are the exercise that should prove that the situation is now under control. In this way, at least for the banks, the horror movie of the financial crisis could find a happy end.

This phase, in particular for Europe, is of the utmost importance, but it is not sufficient to call for a ‘and they lived happily ever after’ solution of the crisis. On the one hand, the level of banks’ capital is (and will remain for the foreseeable future) far from the levels suggested by a growing body of economic literature (Admati and Hellwig 2013). On the other hand – and more specifically – the possible sources of future bank capital (stock issues or retained earnings) can be less copious than expected because of the constraints coming from the market and the present level of banks’ profitability.

This column aims to discuss this issue, looking at a sample of 20 global banks, analysed by R&S, a Mediobanca subsidiary. The main conclusion is that banks have not reached a new equilibrium after the financial crisis and that, if banks really want to be more robust in the future, they must implement radical strategic changes, aiming at deleveraging through reduction of non-core assets and/or achieving substantial reduction of operating costs.

The Present Level of Leverage is Far From Optimal

Notwithstanding the efforts of the recent years, the level of leverage in most banks remains dangerously low. Figure 1 shows that at the end of 2007, only six banks (four of them Italian and Spanish) were above the 3% threshold. Since then the improvement has been significant, but at mid-2013 the ratio on tangible equity to tangible assets (i.e. the measure net of pure accounting items) varies from 1.7% to 6.9%. Three banks do not meet the modest requirement of 3% imposed by Basel-3. If it is reasonable to assume that markets will require a more reassuring limit of 4%, then half of the banks of the sample will still be below this level. 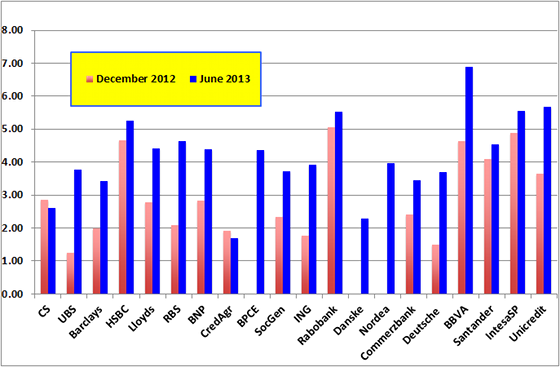 The increase of bank capital after the financial crisis has been significant, but it came after a long period in which funds from banks to shareholders flew uphill, i.e. new stock issues were lower than dividends and buybacks. This outcome was also the consequence of a short-sighted view of shareholder value applied to all firms, and even to an industry such as banking subject to a capital regulation aiming at “sound and prudent management” (Mayer 2013). 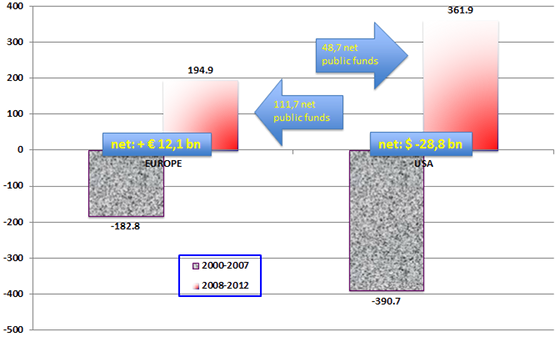 Figure 3 contains the annual net flows for the two areas, and shows that years of significant positive net flows are rare and crucially dependent on the injection of government funds. If the future capital increase of the banks must come from the capital market, the shareholders must reverse their preference in terms or dividends (either ordinary or extraordinary as buybacks). But this is easier said than done. Empirical research shows that the banks’ market share prices are crucially dependent on the level of dividends (Calomiris and Nissim 2013). This contradicts the Modigliani-Miller hypothesis on the irrelevance of the distribution of profits, but is not surprising, as the ‘dividend discount model’ is one of the most common valuation tools (Stiglitz 1974). 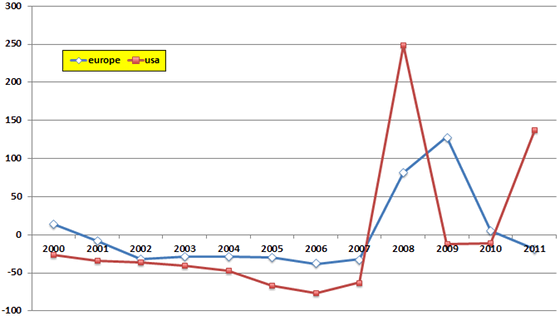 It is not easy to generalise this finding to the main banking systems because we lack aggregate data on dividends and buybacks, but anecdotal evidence seems to extend the picture shown by the Mediobanca sample to many other important banks. If this is the case, there are at least two important policy implications:

All this means that retained earnings will be the main channel for increasing banks’ capital in the future. But is the present level of bank profits sufficient to allow for a consistent increase of bank capital? The empirical analysis, even on a long-term horizon, shows that in many banking systems, and in particular in those that are typically retail-orientated (such as the Italian) gross and net profitability followed a regular declining trend, and are now at a historically low level (Onado and Lusignani 2013).

Banks’ Gross and Net Profitability Are at a Historical Low Level

In 2013, banks’ profits recovered, notwithstanding the European recession and the heavy toll from nonperforming loans. For the entire sample net profits totalled 36 billion, much higher than the 19.5 of the entire 2012. But even in this case, as Figure 4 shows, most banks recorded a net profitability in the first two quarters (net income on total assets) between 0.1 and 0.2%. Even doubling this figure to estimate the yearly income (which could be fairly optimistic), it is clear that the profitability of the banking business has rebounded from the trough of the most acute phase of the crisis, but is still on a low level. 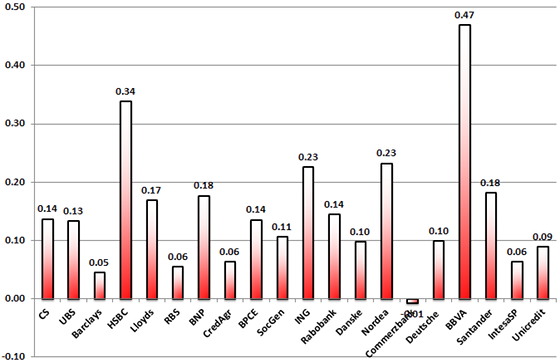 This has two consequences.

Figure 5 shows the Roa/Roe relationship for the Mediobanca sample. Banks with a return on assets below 0.2 (on a half-year basis), and in particular those above the trend line, have either to accept a lower level of return on equity, or abandon their strategy based on the maximisation of leverage.

Figure 5. Return on assets vs Return on equity – First-half 2013 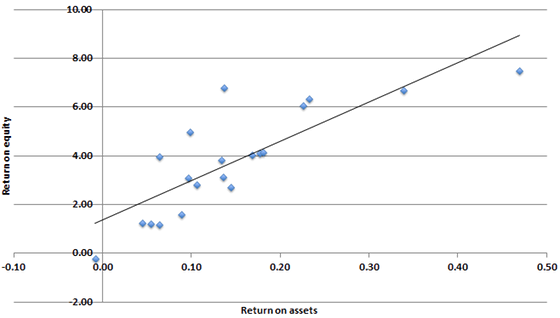 This means that banks have to go further in their strategic responses to the crisis – on the one hand pursuing deleveraging through reduction of assets, and on the other hand decreasing significantly their operating costs. On both sides, the response so far has been modest, to say the least.
The net effect is that in the short-run the resistance to substantially decrease the leverage will be very strong.

For sake of simplicity, assuming a payout ratio of 50%, the half-year return on assets is the ratio of retained earnings to total assets, so the vertical axis measures the rate of increase of banks’ capital. As the (weighted) average is 3.85, it will take about 18 years to double the present level of capital.

To sum up, the situation of the European banks seems far from having reached a new equilibrium. The banks’ responses so far seem to have followed a logic of minor adaptations, and therefore of fierce resistance to fundamental breakthroughs of the regulatory framework (witness the strong lobbying against ring-fencing, the leverage ratio, etc). This strategy can be considered successful only if the market considers safe a 3% level of capital, and shareholders accept lower returns (through lower risk premia) and lower payouts than in the past. The two things look contradictory. In a business that remains highly leveraged, the required rate of return should be significant.

Therefore, banks will have to look at other strategic (and endogenous) responses, such as reduction of non-core assets and slashing of operating costs. On both fronts, the responses so far have been less ‘transformational’ than expected (Llewellyn 2012). But, as banks cannot be considered in a steady state, the title of a famous movie will apply: ‘something’s gotta give’.

Admati, A and M Hellwig (2013), The bankers’ new clothes. What’s wrong with banks and what to do about it, Princeton University Press, Princeton.

Mayer, Colin (2013), Firm Commitment: Why the corporation is failing us and how to restore trust in it, Oxford University Press, Oxford.