It’s been so long that America has had a regulator that is serious about regulating that it’s hard to remember how they operate. Former Federal prosecutor, now superintendent of New York State’s Department of Financial Services, provides a long-overdue and welcome reminder. Lawsky has taken a role that is usually toothless, that of a state banking regulator, and in an impressively short period of time, has made himself a force to be reckoned with. He stunned and outraged Federal regulators when he took a money-laundering probe of Standard Chartered a tad more seriously than anyone expected.

To make a long story short, the other regulators were preparing to sign off on a deal based on Promontory Group piously reporting that only $14 million of transactions were out of compliance (this after Standard Chartered had defied previous consent orders). Lawsky issued a blistering order that documented in detail the willful defiance of US rules (including the bank’s US general counsel overruling the strong recommendation of outside counsel regarding the need to change procedures and drop a lot of the business they were doing). The bank settled with New York for $350 million and admitted to $250 billion of transactions being in violation. That’s four orders of magnitude more than what Promontory found. Lawsky also fined Standard Chartered’s accountant Deloitte $10 million for its role in this scheme.

Needless to say, it’s a safe bet that Lawsky hasn’t been invited to participate in any bank investigations since then. But he’s getting his nose into the tent despite them. For instance, the BBC’s famed business commentator Robert Peston wrote on Thursday:

New York’s Department of Financial Services is very much the late arrival to the worldwide investigation into whether up to 15 huge global banks manipulated the foreign exchange market.

But its request for documents from banks will disturb them, because it has a reputation for being particularly aggressive – as the UK bank Standard Chartered found to its cost when the Department of Financial Services pursued it for breaches of money laundering rules.

And we see that confirmed today in one of top Bloomberg headlines, Currency Market Unsettled by Trader Exits on Lawsky Probe. Key sections:

The foreign-exchange trading business was in upheaval across Wall Street as senior executives resigned and others were fired amid an expanding probe of possible currency manipulation.

Lawsky, who has authority over financial institutions chartered in his state, including several non-U.S. banks that do business in the country, asked for traders’ e-mails and instant messages to review whether they manipulated currency rates, according to the person. While he isn’t authorized to bring criminal charges, he can make referrals to prosecutors.

“You have a law enforcer with zeal who no doubt has numerous weapons, and he’s prepared to deploy them on behalf of the law and on behalf of consumers,” said Bartlett Naylor, a lobbyist for Washington-based consumer group Public Citizen. “The record shows that’s missing in so many other places including the federal level.”

Unfortunately, even if Lawsky uncovers grotesque abuses, prosecutions are unlikely. Lawsky was appointed by Andrew Cuomo, and the rivalry between Cuomo and New York Attorney General Eric Schneiderman is fierce.

Lawksy is moving on a second front that is more germane to most citizens, that of servicing. Readers may recall that all the so-called mortgage settlements did little to change an incompetent and abusive servicing industry. Servicers are set up as factories. They send out bills to customers on a large-scale basis, record payment information and remit that to securities administrators who then compile reports for investors. But as a low-margin business, they’ve never invested in the infrastructure to do much (really anything) customized, such as correcting errors or handling delinquent loans and foreclosures properly. Worse, as loans have been transferred multiple times and servicers fired their experienced personnel during the crisis, their systems are simply not up to the job. And rather than force servicers to fix that in the various settlements, the agreements instead went through the pretense of imposing new standards but allowed astonishingly high error rates, including 1% wrongful foreclosures. That would have amounted to 22,000 homes from 2008 to early 2012.

And since these agreements were signed, servicers have thumbed their noses at them, ignoring requirements to provide a single point of contact for delinquent loans and on a widespread basis and failing to stop dual tracking (the process of continuing to foreclose while evaluating a borrower for a mortgage modification or other relief). And it’s easy to see why. In their contracts with mortgage trusts, servicers are paid to foreclose and not to do modifications or other borrower handholding.

The Feds apparently hoped to finesse this problem (which is rooted in deficient computer systems and records) by getting banks to move their servicing over to new players, particularly smaller “combat” servicers who specialize in handling portfolios with lots of delinquencies. But there’s a big fly in that ointment. High quality servicing does not scale. And Lawsky has apparently figured that out.

Much to the consternation of the mortgage industry, Lawsky is blocking the transfer of mortgage servicing rights to $39 billion from Wells Fargo to Ocwen. Ocwen is already subject to two orders from Lawsky’s office, one in 2011 and one in 2012. The December 2012 order is based on a limited exam earlier that year that uncovered a number of deficiencies: 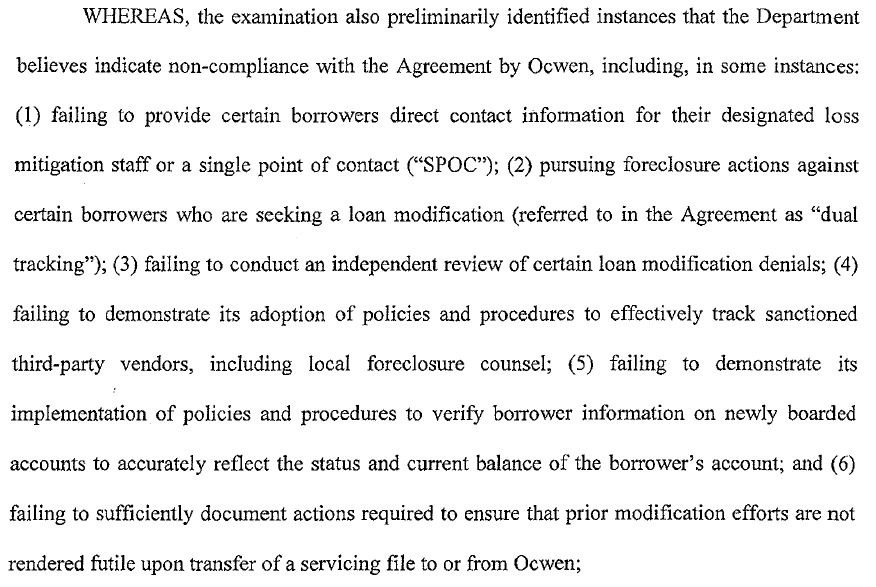 In other words, there was evidence of serious deficiencies in the handling of delinquent mortgages and even in current ones (failing to verify information on newly boarded loans). Lawsky ordered that an independent compliance monitor conduct a comprehensive review and report back to the Department. The monitor was to develop a list of needed corrective measures and oversee their implementation. Lawsky’s freezing of the Wells Fargo deal suggests that either the process was not completed or that Ocwen and the Department are still arguing over some of its findings.

And Lawsky is hardly alone in finding fault with Ocwen. The Financial Times notes:

The DFS halt follows a state and federal settlement announced two months ago by the Consumer Financial Protection Bureau and authorities in 49 states. The CFPB sued Ocwen accusing it of years of “significant and systemic misconduct that occurred at every stage of the mortgage servicing process.”

As part of that settlement, Ocwen was required to provide $2bn in loan modification relief to homeowners and $125m to consumers that were foreclosed upon.

Not surprisingly, the industrial is in denial that the way servicers routinely operate isn’t up to snuff. Again from the Financial Times:

The halt of this sale is likely to force banks to think more closely about who they seek as buyers of their mortgage-servicing rights. “It’s not like you have an infinite pool of entities wanting to buy them,” said Greg Lyons, partner at law firm Debevoise and Plimpton. “You wouldn’t think that selling a bunch of MSRs to Ocwen would create a problem, they’re not a fly-by-night company.”

While Ocwen is indeed not “fly by night” in the sense that they don’t operate out of a strip mall, don’t change the fact that their conduct has fallen well short what various settlements mandate, even with their big loopholes. But the servicers continue to get away with so much bad behavior so often that mortgage industry incumbents are shocked and offended when they are told to toe the line.

So I hope those of you in New York State will call or write Lawsky’s office to tell him you applaud his work. Although as a former prosecutor, he’s presumably thick-skinned, Lawsky is getting heat from the mortgage-industrial complex. A show of support would be welcome.