The Sector Financial Balances (SFB) model is an accounting identity, and these are always true by definition alone. The SFB model says:

Now let’s think about austerity. From the perspective of the SFB model, government macroeconomic austerity is medium to long-term fiscal policy characterized by a focus on reducing budget deficits, or increasing budget surpluses, and mostly on the former in today’s environment where many nations have trade deficits. In addition, it involves destroying private sector net financial assets by cutting government spending and/or raising taxes in such a way that Government additions of net financial assets to the non-government portions of the economy (government deficits) fall to a level low enough (even becoming government surpluses) that they are less than the size of the trade balance, whether in deficit or in surplus.

Issues of distribution of financial flows cut deeply here. If a nation’s economy is structured so that some parts of the foreign sector and some parts of the private sector have sufficient economic and political power to direct financial flows from outside and inside the sector disproportionately into their coffers, then macroeconomic austerity may translate into microeconomic prosperity for those sub-sectors, and into even greater microeconomic than macroeconomic austerity for the sub-sectors with lesser economic and political power.

Right now, in the US, the foreign balance is positive: we are sending more financial assets to the foreign sector than they are sending to us (the trade deficit). In FY 1999, the foreign balance has varied from 2.5% of GDP to over 6% annually. Most recently, it has been running at about 2.5%. If present trends continue, and the Government sector adds less than 2.5% of annual GDP to the domestic private sector through deficit spending, then it will be losing wealth year after year and we will have both aggregate macroeconomic austerity in that sector, and micro-economic austerity in some of its sub-sectors.

Which ones? We know from various studies of inequality (see here and here), that over the past 35-40 years, the American economy has delivered its financial growth disproportionately to large corporations, especially in the FIRE, energy, information technology, defense, and health care sub-sectors of the economy, and also to households either already wealthy, or deriving their income from large companies in these sub-sectors. The vast majority of households have been either barely holding their own or are losing ground economically. These trends have accelerated since the crash of 2008, since most of the gains from the “recovery” have gone to the already wealthy, the bailed out FIRE sub-sector, and the other sub-sectors and households listed above. Here it’s important to realize that since 2009 the private sector aggregate balance has averaged +7.5 % of GDP, with very little “trickle down” to the 99%. The trend over the past year is declining, however, and has dropped to around +5 %, still a substantial level of macroeconomic private savings not seen since the early 1980s.

Here are the projections based on the OMB 2015 budget recently published by the White House, and on quarterly time series data kindly provided in Spreadsheet format by Professors Scott Fullwiler and Stephanie Kelton. 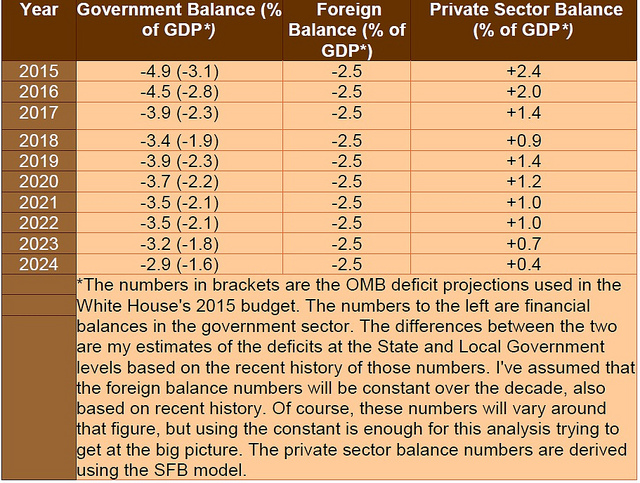 Table One shows that the decade 2015 – 2024 has very small domestic private surpluses projected. The mean projected private surplus (aggregate) savings is 1.2 % of GDP. This is not macroeconomic austerity, but throughout the decade the projections are getting closer and closer to it.

Compare that figure to the mean of approximately 7.2% of GDP for the 6 year post-crash period of fiscal 2009 -2014. Consider also that Government injections resulting in an annual average private sector surplus of 7.2% of GDP over that period haven’t created enough aggregate demand to produce a strong economy with rapid job creation, full employment and widespread prosperity. Instead, these surpluses have only been enough to end the recession and produce a slowly growing stagnant economy, whose rewards are vast for the already wealthy and for large corporations, but are miniscule or non-existent for everyone else. And then ask yourself the question of what the result of the projected small Government deficits over the next decade in the 2015 budget, resulting in mean private sector savings of 1.2% of GDP is likely to do?

My answer is that the President’s budget plan, if enacted and followed, would first produce microeconomic austerity for the 99% with flat or shrinking aggregate demand, and then continued and exacerbated economic stagnation compared to what we’re seeing today. We will also see rapidly increasing economic inequality, resulting eventually in renewed recession whose time frame would be determined by the willingness of the private sector to extend credit to increasingly hard-pressed consumers and small businesspersons.

The bottom line is that microeconomic austerity in the United States won’t end if the President’s budget or others like it or even more tight-fisted are enacted. But, on the contrary, such budgets will mark the beginning of severe microeconomic austerity in the United States leading to even more severe suffering than we’ve experienced so far and to social turmoil and political unrest.

And well it should, since none of the deficit and debt terrorism and miserly fiscal policy reflected in the President’s budget is necessary, because there is no shortage of Federal fiscal capacity in the United States, and no justification for the fiscal policies the US Government has followed since the Recovery Act. There is nothing but the political intention and will lacking to make our economy work for everyone. To create that intention and will we must replace every elected official in the United States if that’s what we need to do. And we should not stop replacing them until we find representatives who will enable us to create that just and fair economy that is our right!