We participated in a Room for Debate forum at the New York Times, on the topic of “Was Marx Right?” Readers are likely to say, “But of course!” Yet Marx had such a large opus and his forecasts were so bold that any fair reading has to come to more nuanced conclusion. But at least Marx is suddenly fashionable after many years of being The Economist Who Could Not Be Named.

The other participants were:

Doug Henwood, A Return to a World Marx Would Have Known

Tyler Cowen, Problems Are in Sectors, Not the System

Brad DeLong, Blind to the System’s Ingenuity and Ability to Reinvent

You can read our contribution, Foreseeing the Dangers but Not the Response, at the Times or further down in the post.

How can this all be explained? The best way to start is by going back to the 1970s. Corporate profitability — which, as every Marxist schoolchild knows, is the motor of the system — had fallen sharply off its mid-1960s highs.

I recall Matt Stoller looked into this (using Fed Flow of Funds data) on his iPad when we were both at a Financial Times conference a few years ago and finding that corporate profit grew in the 1970s after they recovered from the nasty oil-shock recession of 1973-1974. That’s not inconsistent with my recollection of the business press as a young MBA in 1979 and 1980. Stock prices were terrible, and the business press was very critical of American companies, particularly American manufacturers.

But lousy stock prices didn’t mean lousy or falling profits. Here are some of the big reasons why the stock market was so depressed:

High inflation also means investors can’t rely on financial statements. Asset values are in historical dollars, and understated. Depreciation is understated because it is based on historical asset values. That probably means companies are paying more than they should because the value of their depreciation tax shield has eroded. You can’t be sure of profit levels since it depends on whether you use LIFO (last in, first out) accounting, or FIFO (first in, first out). Investors do not like flying blind, so the “I can’t trust the financials” factor makes them even less keen about stocks.

American managers getting their lunch eaten by the Germans and increasingly the Japanese. Both countries were running better manufacturing operations and increasingly making better products. Some of this was by virtue of having newer plants (all post World War II), but much of it was due to being more innovative (for instance, Japanese just-in-time manufacturing) and better labor relations. American management was regularly depicted as sclerotic, and the managers themselves didn’t disagree that much with that assessment.

I asked Stoller to revisit his work and he obligingly put up a post:

I’m putting up this post at the request of Yves Smith. She tells me that the conventional story of the 1970s is that corporate profitability declined as foreign multinationals became competitive with US multinationals. Thus, so goes the story, there was a real impetus to cut labor costs.

Now, I’m no wizard with economic data, so it’s quite possible I have this wrong. But It doesn’t look like corporate profits dropped. The story is more interesting than that. Here’s corporate profits against inflation. 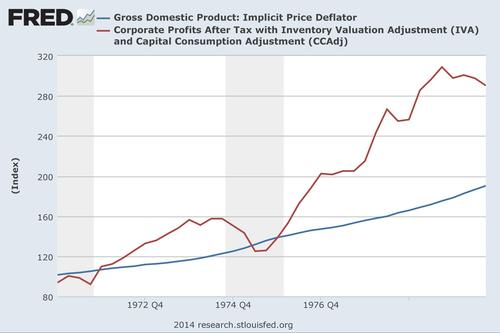 So why the story of lost profits? Well, these narratives serve a purpose, and in this case that narrative is organized around the idea that labor costs needed to go down. Where did the corporate sector get that idea? Well, what grew even faster than corporate profits in the 1970s? Social insurance costs. You see, in 1965, Lyndon Johnson implemented this program called Medicare, and that increased the amount that corporations had to pay to cover the medical costs of older people. And this cost stayed with the corporate sector even during recessions, because it was a labor cost. 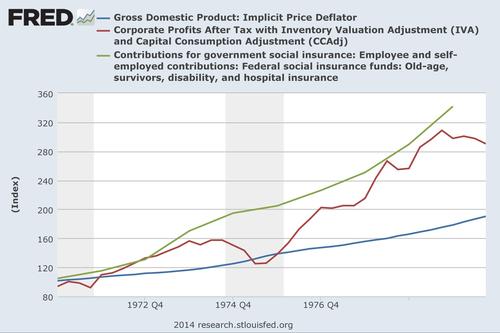 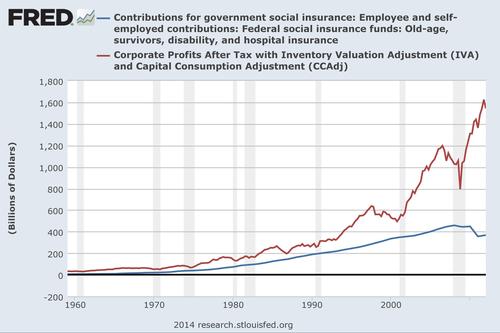 My sense is that this represents the corporate sector gradually shedding not just labor costs, but amount of profit generated by labor. That could mean financialization, increased monopolistic pricing power, offshoring, breaking unions, or all of the above.

While there may be other ways to cut the data to come up with a story that conforms better with the official one, an inflation-adjusted look at corporate profits in the 1970s says they weren’t falling on a secular basis. The economy had a bad recession. But despite being mired in stagflation, corporate profits were still rising after the 1974-1975 downturn. Executives were no doubt frustrated by being faced with tougher-than-ever foreign competition, press that showed them little deference, and far less favorable domestic prospects than they’d enjoyed in the 1950s and 1960. But a more hostile environment is not at all the same as showing a profit decline.

Businessmen were overplaying their weakness at the time, to try to extract concessions from the government. As we recounted in ECONNED, the Carter Administration was desperate to do something, anything, to get the economy out of low gear. Business executives and lobbyists sold the Administration on the idea the the US was falling behind in innovation. But that was simply untrue if you looked at any objective measure, like patent filings. Carter’s science advisor nevertheless embraced the idea, while still calling it a “perceived innovation gap.”

And what was the remedy? Deregulation, natch, when regulation has been a major spur to innovation (air quality standards led to major improvements in automobiles, as well as changes in manufacturing facilities like paper mills).

So this would hardly be the first case where businesses sold themselves as being in more desperate shape than they were to win more concessions from government.

And now to our piece at the Times:

It’s important to remember that Marx was a journalist as well as a theorist, and, in contrast with most modern economists, started from empirical observation. Like Adam Smith, he decried the tendency of businessmen to collude to suppress wages, but his study of sweatshop conditions in industrializing Europe led him to take his conclusions much further.

The core of Marx’s analysis is that businessmen would eventually cannibalize their markets through overproduction, which would lead to declining profitability over time. Others, like Joseph Schumpeter, saw periodic crises of capitalism as inevitable, but Schumpeter argued that this upheaval was a matter of “creative destruction,” which his followers believe sets the stage for phoenix-like revivals.

By contrast, Marx believed that overproduction would lead to pressure on wages, which would prove to be ultimately self-defeating, since the drive to lower pay levels to restore and increase profit levels would wreck markets for goods and services. That’s very much in keeping with the dynamic in advanced economies today.

Marx’s forecast has proven correct by this weak recovery. U.S. companies’ profits account for the highest share of gross domestic product in the post-war era, while workers have gotten the lowest cut of G.D.P. growth ever recorded.

The relentless pursuit of lower labor costs by large corporations, which historically paid the highest wages, has helped push pay levels down, which in turn has resulted in weak demand and short job tenures. To the extent jobs have been created since the crisis, they’ve been concentrated at the bottom of the pay spectrum

Marx believed that industrial workers’ degraded conditions would set the stage for the violent overthrow of the system. That has not come to pass. The communist revolutions that did occur, in China and Russia, took place before major industrialization in those countries.

Marx failed to anticipate how the immense growth of commercial enterprises would create the need for a large range of managers, from shop supervisors and office managers to top executives, as well as technocratic experts such as accountants, lawyers, computer programmers and consultants. And while the Great Depression raised fears of radical revolt, the rise of large unions and Rooseveltian social safety nets served as a bulwark against the Red Menace. The well-paid union workers and the growing numbers of white collar employees created a new American middle class.

For more than a generation after World War II, corporations shared the benefits of productivity gains with workers, supporting demand, growth and social cohesion.

This willingness to reinvest in growth by keeping the middle class healthy is now seen in Corporate America as quaint altruism. Thomas Piketty, in his new book, “Capital in the Twenty-First Century,” makes clear that the experience of postwar America (and the rest of the developed world) was a historical anomaly. The more persistent trend, he found, was a rise in inequality when the rate of return on capital — the major source of income for the wealthiest — exceeded the economy’s overall growth rate.

A threat Marx downplayed has accelerated the concentration of wealth among the very richest. As Michael Hudson has noted, Marx recognized the destructive potential of financial capitalism, but thought it was inconceivable that it would become dominant. He believed the industrialists would succeed in keeping the bankers in check. They have not.

As income disparity has widened enormously and class mobility has eroded, Marx’s idea of class warfare seems particularly apt. But as long as there is a sufficiently large remnant of the American middle class, still socialized to identify with the established order, no matter how beleaguered they are, it’s hard to see how any organized, large scale uprising could occur.