Citi is in no doubt that retail has it right: 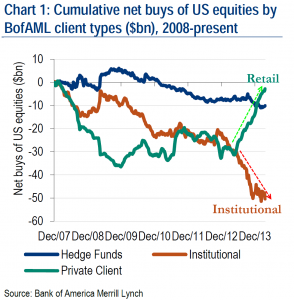 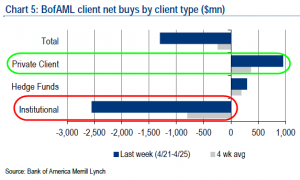 • On top of this the Dow Jones Utility Index is testing the all-time high and the Dow Jones Transportation Index has posted a record monthly close.

• While this bull market in equities is stretched at this stage it does not yet show the classic signs of a bubble top. We continue to preach “skeptical participation” while believing that an improving, self-sustaining economic recovery (despite yesterday’s GDP number) will be supportive for the Equity markets in general in the months ahead.

• While there is no doubt that some individual “high flying” stocks (NASDAQ and Biotech) have suffered some severe down moves it does not look to us that this is a broad based turn but rather a “rotational” move. 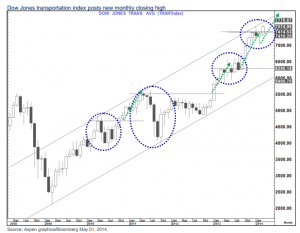 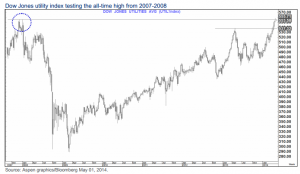 • The broad based indices (S&P 500, DJIA, DJ Transportation) all continue to look constructive and even the NDX looks set to recover its losses.

• Despite the poor GDP “print” yesterday we retain the bias (As per recent Techamental pieces) that a “self-sustaining” recovery in the US economy is actually building and that Q1, 2014 will turn out to be just a “bump in the road”

With respect, since when was a rotation from growth into defensives like utilities and transport a good sign for the underlying cycle? Trees meet woods.

That could be a bullish falling wedge pattern forming, or just a channel down! The 10 year also rallied hard, the yield dropping 4 points to 2.6% and right on its support line within a clearly bearish descending triangle pattern:

Equities look more dumb than smart to me today.