By Chris Becker, a proprietary trader and investing strategist. Originally posted at MacroBusiness

You don’t have to be Einstein or Charlie Munger to work out that since March 2009, central banks have led the recovery (and then some) in global stock market prices (I won’t say value, because they are not the same, just like mistaking volatility for risk).

But it turns out it’s not just money printing  and lower (or negative) interest rates that are doing the cooking!

An interesting report to be published this week by the OMFIF claims that because of record low interest rates, central banks have “lost” around $200-250 billion in foregone revenue in interest income on their reserves, with the shortfall being made up by directly investing into the world’s stock markets – from the FT:

The report, seen by the Financial Times, identifies $29.1tn in market investments, including gold, held by 400 public sector institutions in 162 countries.

China’s State Administration of Foreign Exchange has become “the world’s largest public sector holder of equities”, according to officials quoted by Omfif.  “In a new development, it appears that PBoC itself has been directly buying minority equity stakes in important European companies,” Omfif adds.

In Europe, the Swiss and Danish central banks are among those investing in equities. The Swiss National Bank has an equity quota of about 15 per cent. Omfif quotes Thomas Jordan, SNB’s chairman, as saying: “We are now invested in large, mid- and small-cap stocks in developed markets worldwide.” The Danish central bank’s equity portfolio was worth about $500m at the end of last year.

Overall, the Omfif report says “global public investors” have increased investments in publicly quoted equities “by at least $1tn in recent years” – without saying from what level, or how the figure is split between central banks and other public sector investors such as sovereign wealth funds and pension funds.

The Bank of Japan (BOJ) has publicly led the way with its announcement in April this year, jumping straight into buying 60-70 trillion yen of stocks and ETFs each year, trying to incite inflation and a general recovery: 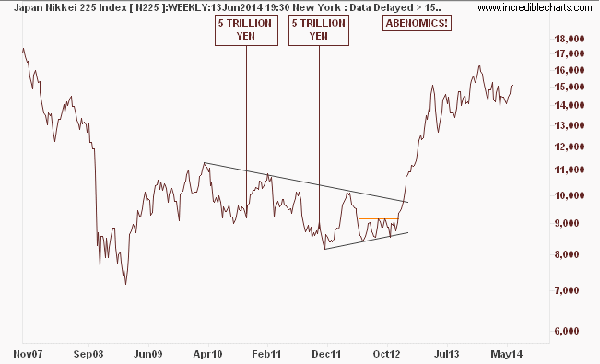 The Bank of England (BOE) has stated it has not bought direct equities among its nearly 400 million GBP QE, although a small quantity maybe some private unlisted stock, the effect has been the same as in the US: 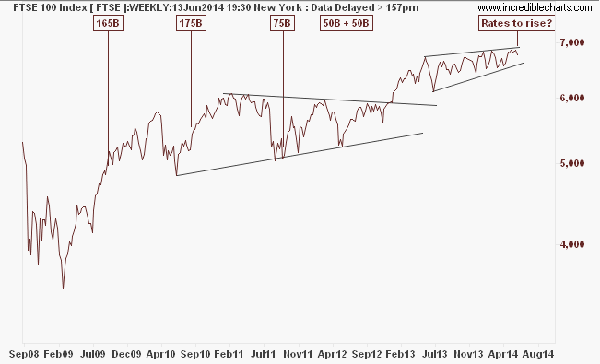 Of course, there are well founded fears that such intervention, including massive growth in reserves, has led to such a benign period of volatility and the expectation of continued price appreciation is cooking “the goose” that laid the golden egg.

In Europe, two years of stimulus from the ECB has pushed the various bourses to record valuations, as measured by the price-to-earnings ratio, which is also pushing the boundaries of delusion when it comes to chasing yield. From Bloomberg:

Gains have pushed the Stoxx Europe 600 Index to 17.5 times annual earnings, the highest since 2002, data compiled by Bloomberg show.

While corporate dividends are higher than bond yields after two years of stimulus by European Central Bank President Mario Draghi, they’re luring investors to companies with unjustified valuations, according to Graham Bishop, an equity strategist at Exane BNP Paribas inLondon. Payouts that exceed the interest on German bunds by more than 2 percentage points will be little comfort as earnings growth falters and the economic recovery sputters, he said.

The advance in the Stoxx 600 since June 2012 has pushed the gauge up 48 percent and sent its price-earnings ratio 26 percent above its decade average relative to reported earnings, according to Bloomberg data.

Of course, one can’t keep one’s own stimulus down as this liquidity has spilled over into record bids for European bonds – yields now below that of US Treasuries – and indirectly into US shares:

Draghi’s policies have encouraged investors to bid up European assets from bonds to stocks and avoid cash. They’ve added $43 billion to European mutual and exchange-traded funds traded in the U.S. this year, according to EPFR Global data tracked by Bank of America Corp. Meanwhile, they poured $3.3 billion into American equities funds.

And the US is guilty as charged when it comes to the general goose and turkey feasts for stock traders, where “good” forecasts are seen as bad for stock prices, and a “dovish” economy good for stock prices, all because of the perception of less or more intervention from the Fed that follows such views, respectively.

Theres no better way to explain the moves of stock markets with intervention than this chart of the S&P500: 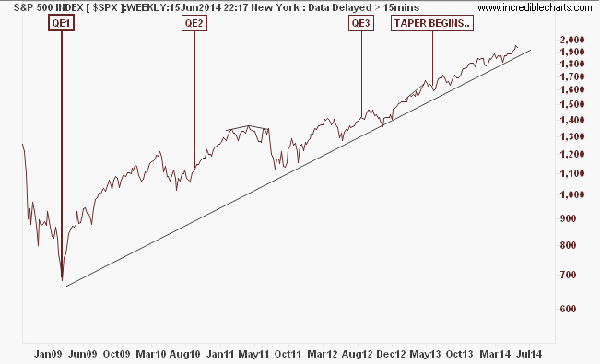 Which brings us to QE3 or “QEforever”, where the Fed buys $40 billion worth of bonds each and every month for an “undisclosed” period of time. There has been some “tapering” since mid-June last year as the Fed firms its forecast of a recovery in the economy.

Last month’s statement was a little cagey on the “bad news is good for stocks” meme, but this week’s FOMC meeting (tomorrow morning, Australian time) could see a tapering statement that sets a fire to the fragile stock markets around the world.  From CNBC:

The Federal Reserve is widely expected to announce another $10 billion monthly reduction in quantitative easing in Wednesday’s FOMC statement. But the focus will be on the Fed’s economic assessment, which could end up dramatically realigning investor expectations about when the Fed will hike rates.

The economic outlook certainly seems to have improved since …. The last two employment reports showed monthly nonfarm payrolls growth of 282,000 and 217,000. And after a severely weak first quarter, several economists are looking forward to Q2 GDP growth around 4 percent.

… the Fed acknowledges that the American economy may be entering into a period of above-trend growth, that could distort expectations about the future target of the federal funds rate, the highly influential rate at which banks lend to each other.

This is a time to be cautious. If central banks start pulling the rug out in the form of stopping, or even slowing down stimulus – heaven forfend they raise rates – it could be a rocky ride for the rest of the year for stocks.