A recent post by Lord Keynes inspired me to write up some very general thoughts on the state of mainstream economics. Today, I believe, mainstream economics is completely incoherent. What do I mean by that? Well, basically if you are in the mainstream you can pretty much believe in whatever you want these days.

Mainstream economics today can be made to say anything. But in being able to do this it says nothing. All the new gimmicks that have been introduced into the mainstream — from asymmetric information to rational expectations — have rendered it a total free-for-all. So, some of the mainstream will tell you that fiscal stimulus will have zero effect on the economy (Ricardian equivalence) while others will tell you that it is the key to future prosperity. Many will fall somewhere in the middle, unable to articulate their actual beliefs in any concrete manner.

In my experience the mainstream has become so incoherent that most of the time these economists will formulate their policy stance completely arbitrarily. Their opinions on the real economy are formed very much so the way the man in the street formulates his: either by assimilation of whatever is in vogue or by engaging in largely arbitrary construction (usually in line with the political predilections of the person in question).

How did this occur? I would argue that there were two key moments in the history of mainstream economics that led to this Great Unwinding. The first was the Cambridge Capital Controversies (CCCs). The results of the CCCs led to a fracture within the more pragmatic side of the mainstream. The object of attack in the CCCs was the standard marginalist production function. The production function sought to show two things. These were as follows.

(1) That the distribution of income in a market economy would be dictated by relative productivities of labour and capital. In more straight-forward terms that means that labour and capital get what they contribute.

(2) That market economies are inherently self-stabilising in the long-run. While planned savings and investment might diverge in the short-run causing unemployment or inflation they would equalise in the long-run. This avoided what came to be known as ‘Harrod’s knife-edge’. Harrod maintained that capitalist economies were inherently unstable in that planned savings and investment would only equalise by a fluke. This implied that continuous and vigorous policy intervention was required to stabilise a capitalist economy. (For more details on Harrod’s knife edge see here and here).

I think that Harrod was right. If you look at really existing capitalist economies government deficits are required to keep them ticking over most of the time. Take a look at the sectoral balances of the US below if you don’t believe me. Government deficits are clearly used almost constantly to offset private sector savings. 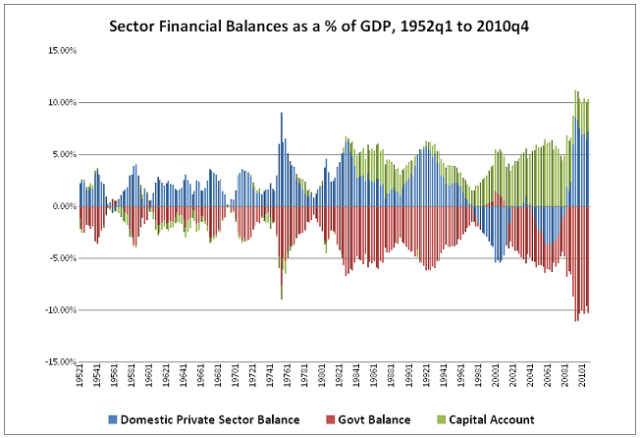 Government intervention to stabilise the economy when savings and investment diverge is the rule, not the exception. There is no ‘long-run’ process of adjustment. Otherwise we would see a balanced government budget in the long-run. We don’t. Not even in the 1950s and 1960s when there was no substantial current account imbalance (i.e. in what effectively amounts to a ‘closed economy’).

What the CCCs showed was that the marginalists could not even prove that a market economy was self-stabilising in the long-run in theory. This led the marginalists to retreat into ever more abstract and out-of-this world constructions. While the production function and the Solow growth model that grew out of it were at least somewhat realistic — that is, you could at least imagine applying them to the real-world — the general equilibrium models and later the microfounded models that came after them were blast-into-space unrealistic.

Solow himself noted this in his Nobel Prize lecture (he won the prize for his flawed work showing that the economy was self-stabilising in the long-run… which shows what passes for Nobel Prize-winning ‘science’ in mainstream economics). I will provide a long quote here because it is important to show how Solow felt about the tendencies generated in economics in response to the CCCs.

The end result [of the new highly abstract constructions] is a construction in which the whole economy is assumed to be solving a Ramsey optimal-growth problem through time, disturbed only by stationary stochastic shocks to tastes and technology. To these the economy adapts optimally. Inseparable from this habit of thought is the automatic presumption that observed paths are equilibrium paths. So we are asked to regard the construction I have just described as a model of the actual capitalist world. What we used to call business cycles – or at least booms and recessions are now to be interpreted as optimal blips in optimal paths in response to random fluctuations in productivity and the desire for leisure. I find none of this convincing…

But now I have to report something disconcerting. I can refer you to an able, civilized and completely serious example of this approach and suggest that you will find it very hard to refute. You can find non-trivial objections to important steps in the argument, but that would be true of any powerful macroeconomic model.

There is a dilemma here. When I say that Prescott’s [i.e. a proponent of rational expectations] story is hard to refute, it does not follow that his case can be proved. Quite the contrary: there are other models, inconsistent with his, that are just as hard to refute, maybe harder. The conclusion must be that historical time series do not provide a critical experiment. This is where a chemist would move into the laboratory, to design and conduct just such an experiment. That option is not available to economists. My tentative resolution of the dilemma is that we have no choice but to take seriously our own direct observations of the way economic institutions work. There will, of course, be arguments about the modus operandi of different institutions, but there is no reason why they should not be intelligible, orderly, fact-bound arguments. This sort of methodological opportunism can be uncomfortable and unsettling; but at least it should be able to protect us from foolishness. (My Emphasis)

Here you see the Great Unwinding in full force. Solow knew that on their own logical terms the new models were impossible to refute. In order to dismiss them he had to basically say that in his opinion they were unrealistic and also point out that there were a whole multitude of models that were logically consistent but arrived at different conclusions. This is where the debate remains today and it is this that accounts for what I have referred to above as the free-for-all within the discipline. But of course the data shows Solow’s own work not be realistic with respect to the real world. So, the invocation of realism — something that I would generally applaud — inevitably comes back to bite Solow firmly on the buttocks.

This confusion was amplified when the neo-Keynesian policy consensus began to unwind in the 1970s due to the inflation. Into this vacuum stepped Milton Friedman and his monetarism. It was noted many times that there were altogether mystical elements in Friedman’s argument and that it ran contrary to the facts but the profession swallowed it. This was because it gave them a common cause to rally to away from the confusion within the discipline.

The second point at which the Great Unwinding took place was when the monetarist policies failed. I have written about this before in extensive detail and if the reader is interested they can consult that writing for an account of the failure. After monetarism had failed the profession once again slipped into incoherence. Rather ironically, this gave rise to the profession asserting that they had reached a ‘New Consensus’. But they had done no such thing.

Whereas in the 1970s and 1980s everyone was talking about monetary control to stop the inflation, in the 1990s there was confusion all around. Economists became rather obsessed with the NAIRU — that is, the idea of a natural rate of unemployment which if the economy fell below it there would be inflation — but this quickly fell apart when unemployment in the US fell below the NAIRU level and no inflation resulted.

After the crisis of 2008 the incoherence became amplified. Today the lack of consensus and the confusion is shocking. While policy-making economists in central banks and the like have a fairly good idea of what is going on the profession is in complete turmoil. This, I think, accounts for why the chief economist at the Bank of England Andy Haldane and Benoît Cœuré at the ECB are calling for substantial curriculum reform. When I speak to people like Haldane they seem to agree with me that the discipline is in turmoil and has no clear-cut answers to the questions of today. The opinions of the leading lights seem formed arbitrarily according to their political or ideological temperament. (The more progressive elements like Summers and Krugman are scrambling to make sense of the world but in refusing to dump the theoretical baggage they have accumulated over the years their attempts appear weak and unconvincing).

What I have always found refreshing about Post-Keynesian economics is that there is and has always been a strong consensus on real-world issues. I may vehemently disagree with the politics of, say, a Marxist-Kaleckian but it is very likely that we will hold basically identical opinions on practical matters. This consensus exists not only across space but also through time. What I mean by that is that Post-Keynesians rarely change their stances on real-world issues after the fact. This is because they usually get it right first time so there is simply no need.

Because of this you also see a smooth evolution of Post-Keynesian theory over the years. You do not see it wracked by ‘crises’ thrown up by the real-world as you do the mainstream. Rather you see it build upon itself in different directions. While the mainstream have a seeming crisis of faith every five to ten years that calls for a complete shake-up of the discipline, the Post-Keynesians roll calmly from one development in the theory to another.

This is why I strongly support the pluralist movement among students. I believe that if all the options are put on the table the students will likely gravitate toward Post-Keynesian economics for the simple reason that it is the most comprehensive and coherent body of theory available. I am perfectly willing to let students make this decision on their own. It seems that it is the mainstream who insist that only their approach is taught. Their insistence on monopoly is, I believe, a sign of enormous insecurity.

Update: The following paper by Kevin Hoover provides a fantastic overview of the Harrod versus Solow issue as to whether capitalist economies are inherently stable or unstable. Hoover, whose work I have discussed here before, strikes me as very Post-Keynesian in this paper.