We turn to the British economist Nicholas Kaldor who was deeply engaged in monetarism as it emerged as a popular dogma in the 1970s and 1980s. Occasionally in his book ‘The Scourge of Monetarism’ Kaldor does seem to say that the policy is simply a ruse:

[Monetarism’s] real effect depends on the shrinkage of effective demand brought about through high interest rates, an overvalued exchange rate, and deflationary fiscal measures (mainly expenditure cuts), and the consequent diminution is the bargaining strength of labour due to unemployment. Control over the ‘money supply’ which has in any case been ineffective on the government’s own criteria, is no more than a convenient smokescreen providing an ideological justification for such anti-social measures.

On other occasions, Kaldor did suggest that the major practitioners actually believed in monetarism. And certainly, given the buzz surrounding it at the time it at least appeared that they did.

This question is not simply one posed to tickle our historical curiosity. It remains relevant today as central banks in many countries initiate ‘quantitative easing’ (QE) programs which are thought to function due to a theory of the money supply that is closely related to monetarism. So, the question of belief is one of utmost importance. Many supporters of QE will deny any connection between the two policies, of course, but it is no coincidence that Milton Friedman himself advocated the use of QE policies in Japan back in 1997:

The Bank of Japan can buy government bonds on the open market, paying for them with either currency or deposits at the Bank of Japan, what economists call high-powered money. Most of the proceeds will end up in commercial banks, adding to their reserves and enabling them to expand their liabilities by loans and open market purchases. But whether they do so or not, the money supply will increase.

There is no limit to the extent to which the Bank of Japan can increase the money supply if it wishes to do so. Higher monetary growth will have the same effect as always. After a year or so, the economy will expand more rapidly; output will grow, and after another delay, inflation will increase moderately. A return to the conditions of the late 1980s would rejuvenate Japan and help shore up the rest of Asia.

This is why the questions surrounding the monetarist doctrine are directly applicable to our world. They shine light on why certain economists and central bankers believe that QE policies are effective and why they continue to hold this belief despite the overwhelming evidence to the contrary.

An aside: I should clarify my position. I am not equating Thatcher’s vicious monetarist policies with the current QE. QE probably has some positive, albeit secondary effects – like giving borrowers some breathing room; but these are probably cancelled out by its negative effects – like removing interest income from savers and pension funds and the like (not to mention the commodities bubbles it has probably stoked).

Monetarism arose largely because Milton Friedman found what he thought to be strong correlations between the amount of money in existence and the national income. At the time the Keynesian orthodoxy had postulated that the stock of money was indeed fixed but the velocity – that is, the speed at which this stock of money turns over in the economy – was variable. Keynes thought that people’s desire for money responded to the prevailing rate of interest and, given that Keynes still subscribed to the quantity theory of money, he assumed that adjustments must be made to national income by people speeding up or slowing down the outstanding stock of money in existence by spending faster or slower.

Friedman was convinced that if he could prove that Keynes was wrong by showing that the velocity of money was relatively fixed and that there was thus a fairly simple mechanical relationship between the money supply and national income, the Keynesian theory would largely fall apart. If Friedman was correct he would also be able to explain inflation as simply being due to the central bank allowing too much money flow into the economy relative to the size of that economy and that all they had to do was target a given money supply to bring the inflation under control. This, of course, was precisely what the Thatcher and other governments tried to do in the 1970s and 1980s.

Interestingly – and much less talked about – is that Friedman’s monetarism also implied that if the economy had undergone a strong shock or financial crisis and was operating with large amounts of unemployment and excess capacity, all the central bank had to do was inject more money into the system. Since, pace Friedman, this extra money would contribute directly to increasing national income – that is, it would be spent and invested – unemployment would come down. Friedman had postulated that it was the failure of the central bank to undertake monetary stimulus that had led to the Great Depression and this was why Friedman was an early advocate of Japan’s QE program (which actually began in 2001 and was a dismal failure).

Related to this Friedman believed that financial crises, such as the 1929 stock bubble, were simply due to the central bank pumping too much money into the economy. The current Fed chairman is, or at least was, an adherent of this view. In a speech honouring Milton Friedman in 2002 Bernanke said:

Let me end my talk by abusing slightly my status as an official representative of the Federal Reserve. I would like to say to Milton and Anna [Schwartz, Friedman’s coauthor]: Regarding the Great Depression. You’re right, we did it. We’re very sorry. But thanks to you, we won’t do it again.

Of course, if we assume that Bernanke was not merely posturing, according to his own logic the Federal Reserve did indeed “do it again”. A monetarist would blame the recent housing bubble in the US on an over-easy money supply. However, whether Bernanke believed this statement or not, he certainly acted in line with Friedman’s monetarist treatment when he undertook the QE programs in the wake of the crash.

So, what was wrong with Friedman’s basic theory? Well, first of all the correlations he thought he found were not the same across time and space. If the data for many countries is compared across time we see strong fluctuations in the velocity of money. Indeed, even within single countries the velocity of money fluctuates quite aggressively in line with overall economic growth. Here, for example, is the velocity of the M2 money supply in the US charted together with the employment-population ratio – an indicator of economic health that is used to determine the ability of the economy to produce jobs: 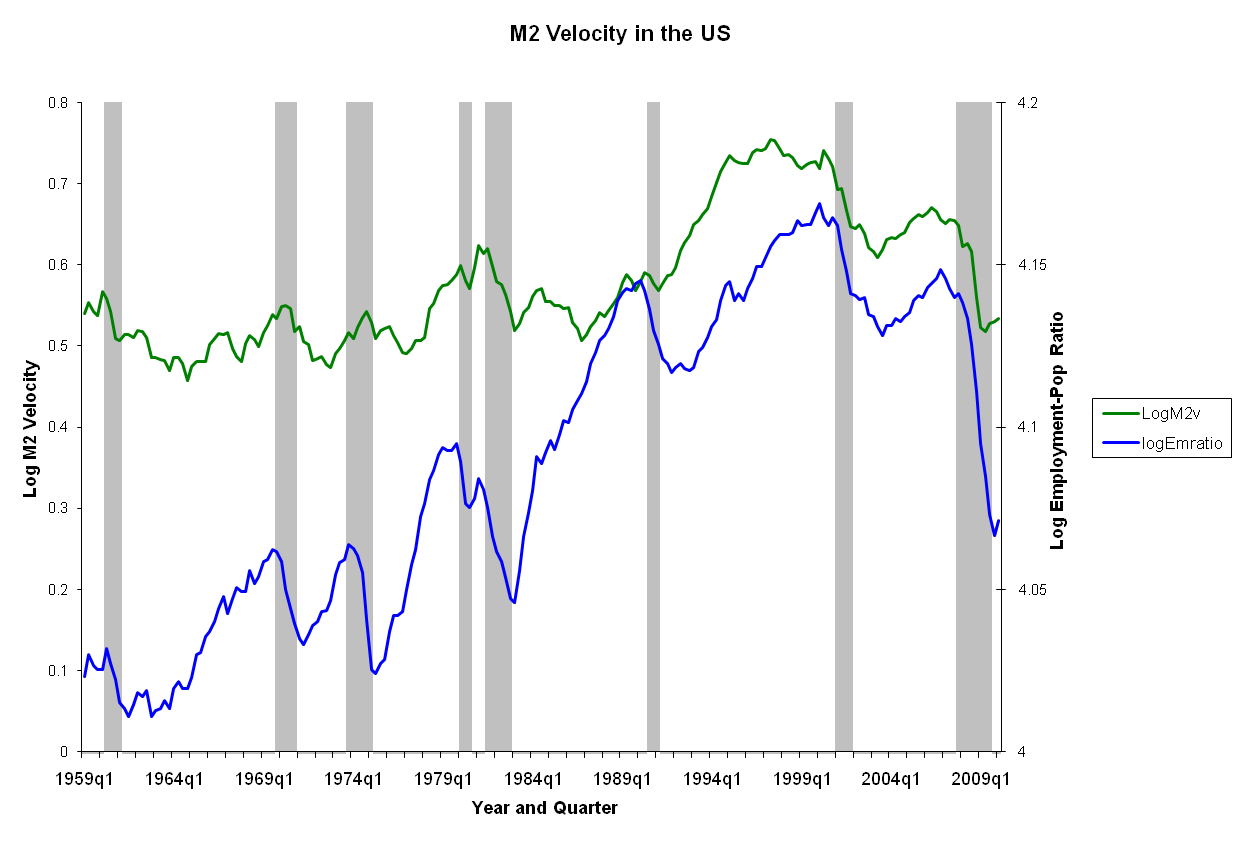 Clearly the velocity of the M2 is not at all constant and moves in rough correlation with the employment-population ratio and, hence, with the health of the economy. So, Friedman was wrong on even the simplest measure. The velocity of money does, in fact, vary over time.

Does this mean that Keynes was correct and large-scale unemployment could not be cured by monetary stimulus due to a falling velocity? No, not really. Keynes’ idea that the velocity of money would move together with the level of economic activity (and the interest rate) was simply a modification of the old quantity theory of money. Thus all Friedman had to do was show a constant velocity and he could debunk Keynes. But in actual fact, both Friedman and Keynes were using a moribund theory that had no basis in reality (albeit Keynes’ version was far closer to the truth than Friedman’s).

It is on this point that both Friedmanite theory and Friedmanite policy must be debunked today. Because neither Keynes nor Friedman – nor most economists today, some of whom still pour over monetary data as if it were goat entrails – understood how the existing money system actually operated. In actual fact, neither velocity nor the outstanding stock of money have any real bearing on economic activity. As Keynes knew well, but could not articulate within the outmoded framework he was using, only the interest rate set by the central bank has any effect on economy activity – and this is through the saving/lending channel, not through some money supply/velocity mysticism.

This theory is called the ‘endogenous theory of money’ and while there are many ways of approaching it, perhaps we should continue in our historical investigation and look at it through the prism of the Radcliffe Commission which was set up in Britain after the war to determine the true role of monetary policy. We shall investigate this fascinating historical event in the third and final chapter of this series.