Tom Palley has written a blog post politely requesting that Paul Krugman might give a bit of recognition to non-mainstream contributors to economics. It would be nice to see this happen but I doubt that it will (although Palley is getting a bit of blog play out of it which is nice). Anyway, I note that in the post he links to a discussion him and Krugman had regarding the Phillips Curve. Before I get to the arguments put forward here let us examine the Phillips Curve in some detail.

It was quite a heroic leap by the profession to formalise a General Law from a total of 35 observations, but formalise they did. After all, it was a neat theory and economics at this time was trying to emulate the hard sciences. Well, the Phillips Curve didn’t work so well over the next half century. Here is a scatterplot diagram with a fitted curve showing the relationship between unemployment and wages in the USA from 1947-2014 (all data from FRED). 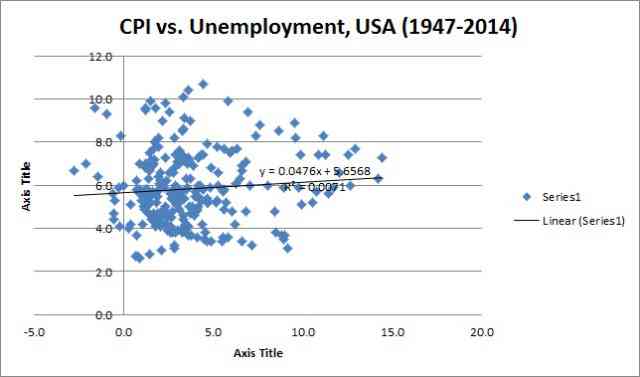 Now, if we saw a negative correlation — that is, if inflation rose as unemployment fell — we would expect to see a strong downward-sloping relationship. Actually the relationship is slightly upward-sloping meaning that inflation more so increased when unemployment increased. We also see a very low R-squared which can also be seen by how far off the line the various datapoints are. In English: there is no firm relationship here and the extremely weak relationship we do find runs in the opposite direction to what the Phillips Curve would predict.

So much for Phillips Curve theory. But what about the relationship between unemployment and wages? After all, this is what Phillips himself tried to show. It was the neo-Keynesians that came after him that tried to generalise based on his observations. 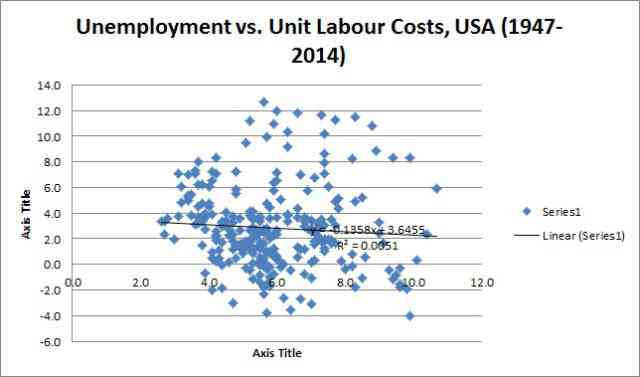 Well, here we at least see a somewhat negative relationship, albeit extremely weak. But we see an even lower R-squared. Basically it seems that the relationship between wages and unemployment in this period is pretty chaotic. In English: again, this is bunk; the sought after relationship does not exist.

Is this all hopeless then? Can we say nothing about inflation at all? No, all is not lost. There is one relationship that does hold firm: namely, that between wages and inflation. 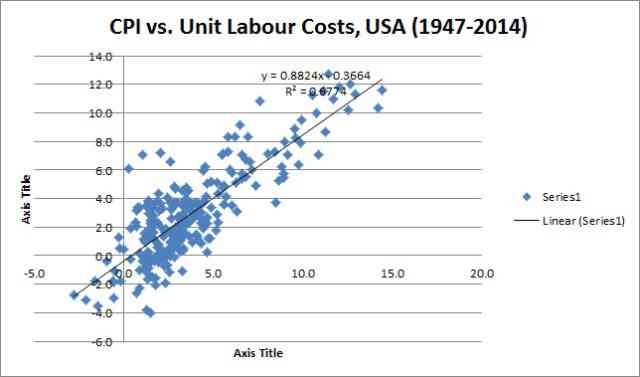 Ah, there we go! There is a nice strong relationship between wages and inflation. When wages rise, inflation tends to rise. This, however, does raise the question of causality. After all, it could be that rising inflation leads to rising wages. Or it could mean the other way around. Frankly, we cannot say.

Indeed, I would be very hesitant to make any generalisations here. Sometimes inflations are wage-led. But sometimes wages rise in response to other sources of inflation. Every inflation must be studied in its particularity. Trying to generalise abstract laws that mimic laws in engineering or hard sciences is just stupid and will just lead up a blind alley.

This brings me back to Palley’s post. He notes that the mainstream have basically tried to solve this problem by incorporating expectations. If workers expect inflation they will bid up wages and so on. This is obvious nonsense and will not lead anywhere at all. If, for example, workers were heavily unionised and radicals got control over the unions we could easily imagine them just bidding up wages no matter what they thought inflation might be. They would just be doing so in order to get more of the economic pie. It is not like this has never happened before in history (*cough*, Allende in Chile, *cough*).

Palley is more realistic in this regard when he writes:

In my view, the real issue is the extent to which inflation expectations are incorporated into wage behavior. Workers may have absolutely correct expectations of inflation but not incorporate them into nominal wage demands because of job fears. (My Emphasis)

Here Palley hints at the fact that there is an aspect of social power to the bargaining process. Hence, if workers fear getting fired they might not try to bid up their wages. But once you open this box it is pretty hard to close. The power dynamics of worker bargaining are enormously complex and require historical and institutional nuance. Palley appears to instead fall back on the idea that bargaining power depends on unemployment — that is, that workers will bid up wages when there is low unemployment. But, as we have seen above, this position does not have empirical support.

In reality power dynamics are complicated and need to be studied in and of themselves. There are also many different types of inflation, as John Harvey has noted elsewhere in an excellent piece. In my forthcoming book I note four key types of inflation. These are as follows:

In laying out a Phillips Curve, or any other contraption, we are likely to only capture one type of inflation. Indeed, in the case of the Phillips Curve we only capture one sub-type of one type of inflation — namely, a sub-type of cost-push inflation (wage inflation). This does not lead to cogent thought. Given that Palley is in a dialogue with Krugman it might be worth pointing out that the latter has extremely crude views on real-world inflation which I have noted before. In subordinating one’s thoughts to a contraption one always runs the risk of blocking out the real-world.

Why is it so controversial to make this point? Why do we have to try to form a single theory of inflation? Why is it that a theory is only valid when it has been laid down in black and white form in a model? After WWII the profession tried to formulate a General Law of inflation. It was a disaster. Why on earth would we want to try to do this again? If economists — especially Keynesians — have not yet grasped that history will melt their attempts at timeless construction, they learned nothing from the lessons of the 1970s.

But that comes back again and again to that old timey question: why does every aspect of economic theory need to be cast in terms of a model? Sometimes modelling clarifies thought, but sometimes it obfuscates it. Inflation is such a complex, historical phenomenon it is definitely one that is obfuscated by modelling. So, why the need for models? Frankly, I think it is on those that build them to justify this, not on me to engage in conjecture in criticising it.