Remember the infamous moment in The Untouchables, the PBS documentary on the failure to prosecute major financial firms for blowing the global economy, when assistant Attorney General Lanny Breuer made it clear that he was more worried about harm to banks than harm to the public? To refresh your memory:

In my conference room, over the years, I have heard sober predictions that a company or bank might fail if we indict, that innocent employees could lose their jobs, that entire industries may be affected, and even that global markets will feel the effects….And, in some cases, the health of an industry or the markets are a real factor. Those are the kinds of considerations in white collar crime cases that literally keep me up at night, and which must play a role in responsible enforcement.

Breuer’s remarks elicited a firestorm of criticism. Yet state treasurers and public pension funds are similarly, and vastly more openly, unduly solicitous about the health of the foxes than the chickens in their henhouses, yet their arguments are peculiarly given a free pass.

David Sirota at the International Business Times followed up on a new instance of Wall Street sycophancy in action, that of a failed Freedom of Information request by the Providence Journal to obtain more information about hedge funds. A consultant, Cliffwater, had prepared due diligence reports on 19 hedge funds and presented them to the State Investment Committee meeting. The bone of contention is that under state law, documents presented in open sessions are public.

What is astonishing about what transpired isn’t the result, Initially, the treasurer, General Treasurer Gina Raimondo, delivered only heavily redacted documents. The Journal appealed, and the state attorney general denied the request. (The Providence Journal is considering an appeal of his decision.)

Sirota obtained a copy of the letter Raimondo sent to the attorney general arguing against the release. It’s a remarkable piece of work. This is the section that argues that the release of information could hurt the fund managers: 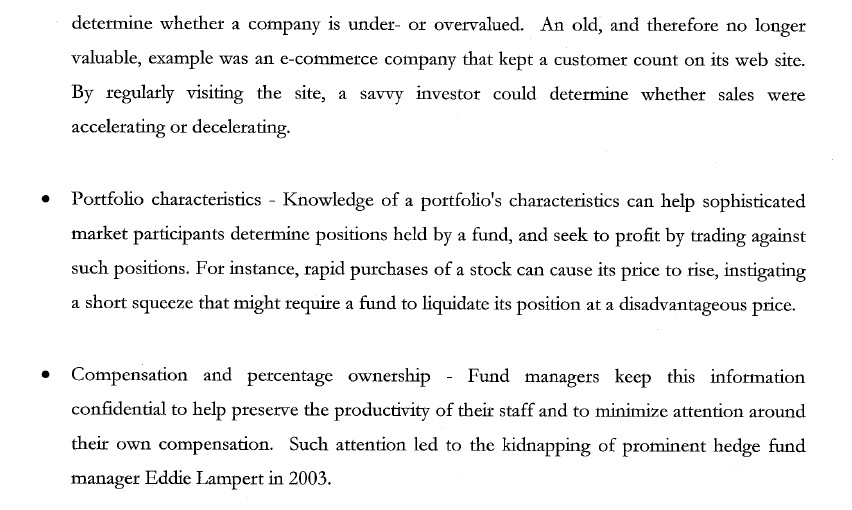 These excuses are ludicrous. It is highly unlikely that the names of staff members at hedge funds are a state secret. Similarly, recall the grandiose of private equity funds that the entirely of their contracts with limited partners were trade secrets, when inspection of their agreements shows that it’s hard to find anything of competitive value. Hedge funds are not letting sensitive information relating to current positions into a marketing document nor sharing them with fund consultants. But the really precious excuse is the last one, about letting the dangers of letting the sans culottes know how much hedgies really make. It’s watered-down version of venture capitalist Tom Perkins’ rant that “jealousy of the 0.1% will lead to Kristallnacht.”

But even this sort of discussion obscures far more important issues. Raimondo agues vigorously that Rhode Island needed (stress needed) to invest in the “asset class” of hedge funds in order to be sufficiently diversified and meet its fiduciary duty. The unstated but clearly implied rationale is that investing in hedge funds is essential, either to meet return requirement (as in hedge funds out-perform other strategies) or they constitute an “asset class and hence must be have some funds allocated to them. Note that a large body of academic literature has found that investing in more asset classes does not increase returns, but does reduce risk.

However, hedge funds in recent years have struggled to meet stock market returns, raising doubt about their allure of outperformance. In addition, most scholarly work on asset classes in very broad terms (such stocks versus bonds versus cash versus foreign stocks versus real estate) that it is hard to see see a compensation strategy (aka the prototypical hedge fund 2% annual fee an 20% upside fee) amounting to being an asset class. Moreover, as we saw in the crisis, formerly weakly correlated investments moved together when markets got rocky and investors ran from risk. In other words, Raimundo’s claim that hedge funds are an indispensable investment don’t hold up to scrutiny, particularly when you consider that a recent study found that investing in a mix of 5 Vanguard funds would produce better returns than those realized by 90% of public pension funds.

In addition, recall that the Providence Journal sought redacted information from several fund consultant reports. Riamundo maintains, vigorously, that access to this sort of insight, from firms that allegedly can provide superior insight by virtue of the consultant receiving confidential information from the hedge funds themselves, is crucial for Rhode Island to be able to make sound investments. But anyone with an ounce of objectivity knows that the reliance on these gatekeepers is much more an exercise in liability avoidance than return maximization. The very fact that the SEC found widespread shortcomings in contractual protections for investors and in oversight mechanisms in private equity funds is as much an indictment of these gatekeepers as of the limited partners.

So why is Raimundo being so recalcitrant? Sirota has some ideas:

The Providence Journal reports that the move has generated roughly $70 million in fees for the financial industry — the same industry that has made major contributions to Raimondo’s political campaigns. According to GoLocalProv, documents from the Treasurer’s office show that before Raimondo took office, Rhode Island “investment fees were among the lowest of any state pension fund in the country,” but that “under Raimondo, the cost of investment fees has nearly tripled.” A union-financed investigation estimated that fees have increased almost 700 percent in recent years.

According to the Journal, some of those fees from the $7.7 billion Rhode Island pension system are paid to Point Judith, a financial firm created by Raimondo that Rhode Island invested in under the previous treasurer, Frank Caprio (D). Raimondo’s personal blind trust fund still periodically earns income from its Point Judith holdings. Raimondo’s spokesperson told IBTimes that the Treasurer has taken all “recommended steps to assure that potential conflicts of interest would be avoided during her administration.”

Finally, Sirota was kind enough to feature us prominently in his list of parties seeking more transparency and running into a brick wall:

California’s $301 billion pension system, the largest in the nation, has been the target of an open records lawsuit by Naked Capitalism’s Susan Webber (who writes under the name Yves Smith). She filed her suit after CalPERS officials did not respond to her request for detailed fund performance data….

In the Pennsylvania leak, Webber discovered what she says are provisions outlining a tax dodge technique that may face Internal Revenue Service scrutiny.

But even though more and more reporters are mounting more assaults against alternative investment secrecy, no one has yet breeched the wall. And until the public realizes that it pays, though higher taxes or reduced services when public pensions come up short as a result of poor investment selection, the chicanery is sure to continue.