You have to hand it to the private equity firm kingpins: they are skilled at financial sleight-of-hand which makes their already-lucrative investments even more attractive to them. But as the SEC has been exposing, too many of these tricks come at the expense of their investors.

The Wall Street Journal exposes the latest ruse tonight. While the dollar amounts aren’t earthshaking, the behavior is particularly shameless, and involves some of the biggest names in the industry: KKR, Blackstone, and TPG. It shows that these players are unafraid of engaging in out-and-out skimming as long as they dress it up in a way that is hard to ferret out.

The Wall Street Journal account, by Mark Maremont and Mike Spector, involves the use of kickbacks related to purchasing volume discounts. For instance, across its 74 portfolio companies, Blackstone bought more than 50,000 Hewlett Packard computers in 2011, and used bulk buying to obtain discounts. Blackstone, along with many other private equity firms, uses a company called CoreTrust Purchasing to negotiate these price breaks. Blackstone effectively skims a percentage of these haircut for itself:

Blackstone between 2011 and 2013 received roughly $7 million in fees from a company that negotiates discounts for its portfolio companies, according to people familiar with the matter….KKR and TPG similarly disclosed that they receive group-purchasing fees that aren’t shared with investors. KKR separately said such fees totaled $6 million over the past three years… TPG declined to provide dollar amounts.

A key provider of group-purchasing services to private-equity firms is CoreTrust Purchasing Group, an intermediary that negotiates special pricing for portfolio companies on items such as office supplies and package deliveries.

CoreTrust funds its business by getting “administrative fees,” or commissions, from vendors, which it says vary from 1% to 3% of the purchasing volume. In some instances, it says, it “may share a portion” of these commissions with private-equity firms “whose portfolio companies are purchasing members.” Both Blackstone and KKR confirm they receive those commissions from CoreTrust…

KKR participates in CoreTrust through its Capstone consulting group. A KKR spokeswoman said the arrangement “is a commercial one that reflects value added by both CoreTrust and Capstone, and has been disclosed both to portfolio companies and fund investors.”

Similarly, industry participants were surprised to learn about the fees, making it hard to take KKR’s assertion that investors were properly informed seriously. Again from the Journal:

Mario Giannini, chief executive of Hamilton Lane Advisors, which advises many big private-equity investors, said he wasn’t aware that firms have been collecting group-purchasing fees. “Of the funds I know that do that, there’s just a savings to the companies, no fee goes to the [private-equity firms],” he said.

Hamilton Lane is one of the biggest and blue-chippiest gatekeepers. If they don’t know about this practice, that is strong proof that is has not been properly presented to investors.

Now why are these rebates controversial? The reason is the failure of the general partners to disclose to investors that these fees even existed when fees have been a point of contention with limited partners.

Private equity investors, known in the trade as limited partners, have been pushing back against the fees that they are charged, which go well beyond the prototypical “2 and 20” or 2% annual management fee and 20% upside fee.* But private equity firms also charge fees at the portfolio company level, as in directly to the companies they have purchased, such as monitoring fees (for babysitting the company) and transaction fees (which are on top of investment banking fees charged by major financial firms).** The limited partners, unhappy with the level of the charges and the bad incentives they create (the more the private equity firms earn from fees, the less they have reason to care about how well the deals perform), have demanded and won concession. They have taken the form of rebates of these fees, typically 80%.

The limited investors have operated under the illusion that they had negotiated rebates of all fees the private equity firms were charing to the fund and the businesses it had bought. But of course, in the contracts, the rebates apply only to the fees that are specified in the contracts. As the latest SEC revelation indicates, the investors were losing out in ways that they were never told about, by virtue of the private equity firm general partners charging even more types of fees than the limited partners knew existed.

Since one of the ways that private equity firms meet their return targets is aggressive cost cutting, one would assume that Corporate America was following rather than leading private equity firms in squeezing vendors to get better prices. And an investor in a private equity fund unless told otherwise, would naturally assume that this was part of the service he was paying for, either through the management fee or the monitoring fee.

You can get an idea of how the general partners artfully mislead their limited partners. Look at this page from Blackstone’s website (click to enlarge): 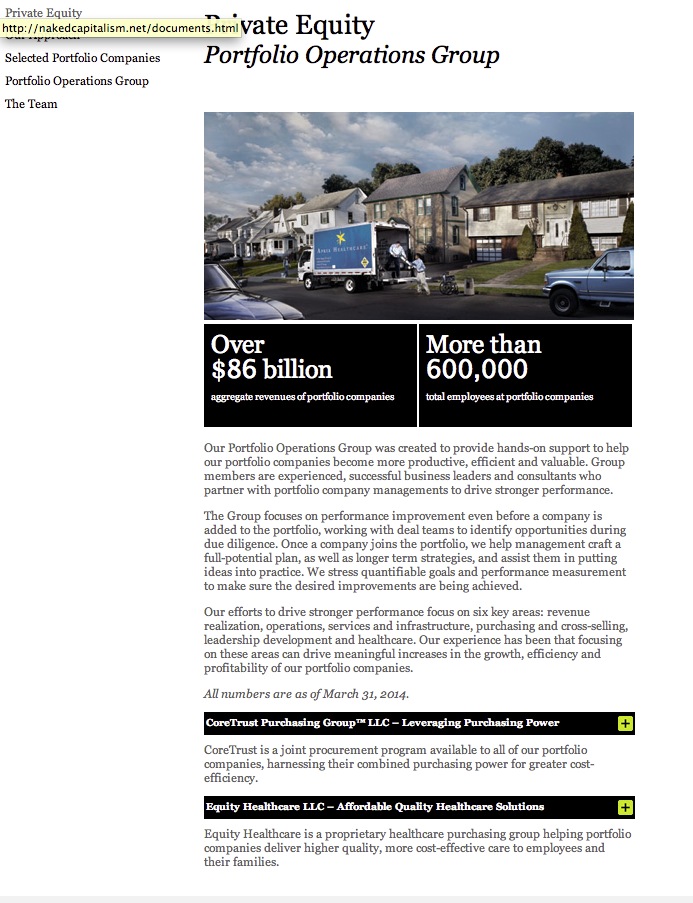 The first three paragraphs imply that the operations of this group are internal to Blackstone. Even though CoreTrust is listed at the bottom, it is described as a “joint procurement program,” which in context would be assumed to mean “joint” across all of Blackstone’s portfolio companies, and not a third-party service. So it is also not disclosed to investors that in addition to the kickbacks, they are paying fees to CoreTrust for services that it would be natural to believe were provided by Blackstone proper (as in CoreTrust was a subsidiary).

The same dodgy dealings apply to the “Equity Healthcare” entity listed at the very bottom of the page. Again from the Journal:

In a similar group-purchasing program, Blackstone directs many of its portfolio companies to buy their employee health insurance through a Blackstone subsidiary, Equity Healthcare LLC, and has marketed that service to private-equity rivals.

Equity Healthcare gets a monthly fee per covered employee from the portfolio company, typically $2.00 to $2.70, regulatory filings show. It covers nearly 300,000 employees, according to Blackstone’s website.

Admittedly not everyone who is using CoreTrust is necessarily getting kickbacks. The Journal points out:

Some private-equity firms that participate in CoreTrust, including Bain Capital, Vestar Capital and Warburg Pincus, said they don’t receive any fees from the company.

One private equity maven was skeptical of these claims:

The really curious part is that Bain and a couple of other firms say that they don’t get kickbacks. It’s certainly uncharacteristic of PE people to leave money on the table.

That goes in spades for Bain, which is particularly aggressive about the fees it levies. And the form of the denial to the Journal raise the possibility that some of these supposedly innocent firms may be getting compensation from CoreTrust via means other than “administrative fees” (as in they structured the deal so as to avoid the cash coming in the form of “fees”).

Despite the seemingly small amounts involved, this article is important because it reveals the lengths to which private equity firms, already famous for the eye-popping earnings they generate to their top brass, go to grasp every opportunity possible to extract more money, even if it involves complicated corporate relationships and deception of trusting investors. This behavior isn’t commercial. It’s pathological.

____
* The management fee is typically lower on mega-funds and the 20% upside in theory is subject to a hurdle rate for most funds. More on how that really works in future posts.
** As we have seen in the limited partnership agreements we have reviewed, those fees are often charged to the fund if the portfolio company isn’t profitable enough to pay them in full.