Lambert: Just when you need them the most….

In most aspects of their lives humans must plan forwards. They take decisions today that affect their future in complex interactions with the decisions of others. When taking such decisions, the available information is only ever a subset of the universe of past and present information, as no individual or group of individuals can be aware of all the relevant information. Hence, views or expectations about the future, relevant for their decisions, use a partial information set, formally expressed as a conditional expectation given the available information.

Moreover, all such views are predicated on there being no unanticipated future changes in the environment pertinent to the decision. This is formally captured in the concept of ‘stationarity’. Without stationarity, good outcomes based on conditional expectations could not be achieved consistently. Fortunately, there are periods of stability when insights into the way that past events unfolded can assist in planning for the future.

The world, however, is far from completely stationary. Unanticipated events occur, and they cannot be dealt with using standard data-transformation techniques such as differencing, or by taking linear combinations, or ratios. In particular, ‘extrinsic unpredictability’ – unpredicted shifts of the distributions of economic variables at unanticipated times – is common. As we shall illustrate, extrinsic unpredictability has dramatic consequences for the standard macroeconomic forecasting models used by governments around the world – models known as ‘dynamic stochastic general equilibrium’ models – or DSGE models.

DSGE Models Play a Prominent Role in the Suites of Models Used by Many Central Banks (e.g. Bank of England 1999, Smets and Wouters 2003, and Burgess et al. 2013). The supposedly ‘structural’ Bank of England’s Quarterly Model (BEQM) broke down during the Financial Crisis, and has since been replaced by another system built along similar lines where the “behaviour of the central organising model should be consistent with the theory underpinning policymakers’ views of the monetary transmission mechanism (Burgess et al. 2013, p.6)”, a variant of the claimed “trade-off between ‘empirical coherence’ and ‘theoretical coherence’” in Pagan (2003).

Many of the theoretical equations in DSGE models take a form in which a variable today, say incomes (denoted as yt), depends inter alia on its ‘expected future value’. (In formal terms, this is written as Etyt+1], where the ‘t’ after the ‘E’ indicates the date at which the expectation is formed, and the ‘t+1’ after the ‘y’ indicates the date of the variable). For example, yt may be the log-difference between a de-trended level and its steady-state value. Implicitly, such a formulation assumes some form of stationarity is achieved by de-trending.1

Unfortunately, in most economies, the underlying distributions can shift unexpectedly. This vitiates any assumption of stationarity. The consequences for DSGEs are profound. As we explain below, the mathematical basis of a DSGE model fails when distributions shift (Hendry and Mizon 2014). This would be like a fire station automatically burning down at every outbreak of a fire. Economic agents are affected by, and notice such shifts. They consequently change their plans, and perhaps the way they form their expectations. When they do so, they violate the key assumptions on which DSGEs are built.

Extrinsic unpredictability derives from unanticipated shifts of the distributions of economic variables at unpredicted times. Of these, location shifts (changes in the means of distributions) have the most pernicious effects. The reason is that they lead to systematically biased expectations and forecast failure. Figure 1 records UK unemployment over 1860–2011, with some of the major historical shifts highlighted. 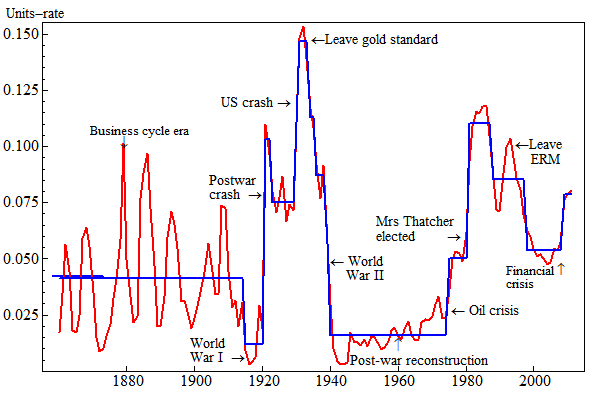 Four main epochs can be easily discerned in Figure 1:

As Figure 2, panel (a) confirms for histograms and non-parametric densities, both the means and variances have shifted markedly across these epochs. Panel b shows distributional shifts in UK price inflation over the same time periods. Most macroeconomic variables have experienced abrupt shifts, of which the Financial Crisis and Great Recession are just the latest exemplars. 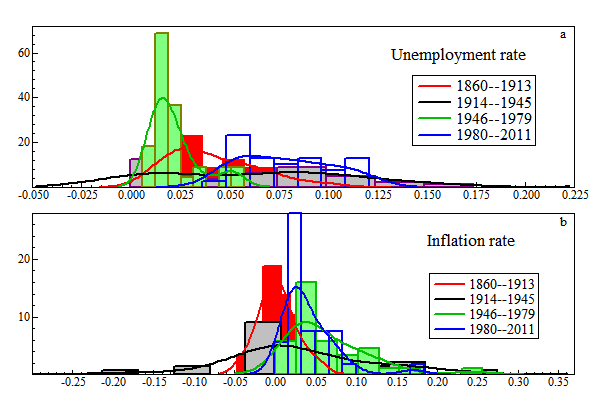 The importance of three-way dating can be seen by looking at how one can fall into a trap by ignoring it. For example, conditional expectations are sometimes ‘proved’ to be unbiased by arguments like the following. Start with the assertion that next quarter’s income equals expected future income plus an error term whose value is not known until next quarter. By definition of a conditional expectation, the mean of the error must be zero. (Formally the expectation is denoted as E[yt+1|It] where It is the information set available today.)

Econometric models of inflation – such as the new-Keynesian Phillips curve in Galí and Gertler (1999) – typically involve unknown expectations like E[yt+1|It]. The common procedure is to replace them by the actual outcome yt+1 – using the argument above to assert that the actual and expected can only differ by random shocks that have means of zero. The problem is that this deduction assumes that there has been no shift in the distribution of shocks. In short, the analysis suffers from the lack of a date on the expectations operator related to the distribution (Castle, Doornik, Hendry and Nymoen 2014).

The basic point is simple. We say an error term is intrinsically unpredictable if it is drawn from, for example, a normal distribution with mean µt and a known variance. If the mean of the distribution cannot be established in advance, then we say the error is also extrinsically unpredictable. In this case, the conditional expectation of the shock needs not have mean zero for the outcome at t+1. The forecast is being made with the ‘wrong’ distribution – a distribution with mean µt, when in fact the mean is µt+1. Naturally, the conditional expectation formed at t is not an unbiased predictor of the outcome at t +1.

It seems unlikely that economic agents are any more successful than professional economists in foreseeing when breaks will occur, or divining their properties from one or two observations after they have happened. That link with forecast failure has important implications for economic theories about agents’ expectations formation in a world with extrinsic unpredictability. General equilibrium theories rely heavily on ceteris paribus assumptions – especially the assumption that equilibria do not shift unexpectedly. The standard response to this is called the law of iterated expectations. Unfortunately, as we now show, the law of iterated expectations does not apply inter-temporally when the distributions on which the expectations are based change over time.

The critical point is that none of these distributions is indexed by time. This implicitly requires them to be constant. The law of iterated expectations need not hold when the distributions shift. To return to the simple example, the expectation today of tomorrow’s probability of a head will not be 50% if the coin is changed from a fair coin to a trick coin that has, say, a 60% probability of a head.

In macroeconomics, there are two sources of updating the distribution.

Much of the economics literature (e.g. Campbell and Shiller 1987) assumes that such shifts are intrinsically unpredictable since they depend upon the random innovation to information that becomes known only one period later.3

The point is that the new distributional form has to be learned over time, and may have shifted again in the meantime.4  The mean of the current and future distributions (µt and µt+1) need to be estimated. This is a nearly intractable task for agents – or econometricians – when distributions are shifting.

Using artificial data from a bivariate generating process where the parameters are known, Figure 3, panels a–c, show essentially that the same V-shape can be created by changing many different combinations of the parameters for the dynamics, the intercepts, and the causal links in the two equations, where panel d shows their similarity to the annualized % change in UK GDP over the Great Recession.

For example, the intercept in the equation for the variable shown in panel a was unchanged, but was changed 10-fold in panel c. A macro economy can shift from many different changes, and as in Figure 3, economic agents cannot tell which shifted till long afterwards, even if another shift has not occurred in the meantime. 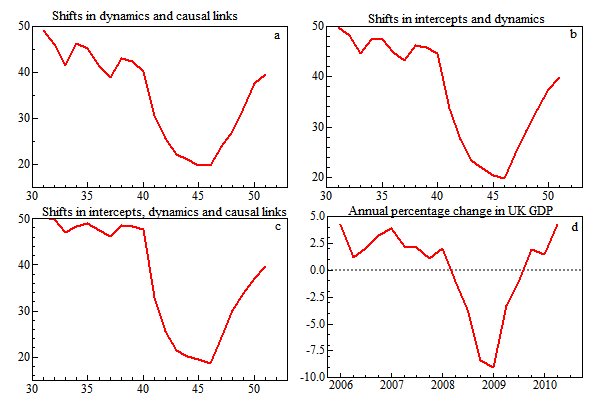 The derivation of a martingale difference sequence from ‘no arbitrage’ in, for example, Jensen and Nielsen (1996) also explicitly requires no shifts in the underlying probability distributions. Once that is assumed, one can deduce the intrinsic unpredictability of equity price changes and hence market (informational) efficiency. Unanticipated shifts also imply unpredictability, but need not entail efficiency. Informational efficiency does not follow from unpredictability per se, when the source is extrinsic rather than intrinsic. Distributional shifts occur in financial markets, as illustrated by the changing market-implied probability distributions of the S&P500 in the Bank of England Financial Stability Report (June 2010).

In other arenas, ‘location shifts’ (i.e. shifts in the distribution’s mean) can play a positive role in clarifying both causality, as demonstrated in White and Kennedy (2009), and testing ‘super exogeneity’ before policy interventions (Hendry and Santos 2010). Also, White (2006) considers estimating the effects of natural experiments, many of which involve large location shifts. Thus, while more general theories of the behaviour of economic agents and their methods of expectations formation are required under extrinsic unpredictability, and forecasting becomes prone to failure, large shifts can also help reveal the linkages between variables.

1 Burgess et al. (2013, p.A1) assert that this results in ‘detrended, stationary equations’, though no evidence is provided for stationarity. Technically, while the ‘t’ in the operator Et usually denotes the period when the expectation is formed, it also sometimes indicates the date of information available when the expectation was formed. The distribution over which the expectation is formed is implicitly timeless – the ‘t’ does not refer to the date of some time-varying underlying probability distribution.

2 This is akin to the concept in Knight (1921) of his ‘unmeasurable uncertainty’: unexpected things do happen.

3 To give a practical example, consider an unknown pupil who takes a series of maths tests. While the score on the first test is an unbiased predictor of future scores, the teacher learns about the pupil’s inherent ability with each test. The teacher’s expectations of future test performance will almost surely change in one direction or the other. After the first test, however, one doesn’t know whether expectations will rise or fall.