Lambert here: Germane to our Ukraine discussion. And assuming, which not all assume, that ISIS is for realz.

By Houses and Holes, who edits MacroBusiness. Originally published at Macrobusiness.

Chief Economist at Saxo Bank, Steen Jakobsen, thinks they should:

“There are causes worth dying for, but none worth killing for” – Albert Camus

The world is increasingly becoming engaged in civil wars and general turmoil where Camus’ words could and should play a central but never will. This article is one of the hardest to write as war is never about right or wrong. They are per definition always wrong and extremely personal and emotional. The fact is, however, that we need to put “the risk of wars” into our macro outlook as they are increasing not only in intensity but also in the numbers of casualties.

I will not condone anyone or any party involved in the present conflicts – I learned my hard lesson advocating the removal of Saddam Hussein, only to learn that his successors are just as bad. Therefore, Camus’ words will remain my mantra.

The simplest way to “measure” geopolitical risk is to look at the price of energy. Energy is everything for a macro economist as it’s a tax on the economy when high, and a discount when low. High energy consumption levels makes it a critical part of any projection but despite this, energy assumptions are often exogenous (given!).

Think about this: Everything you did this morning involved energy consumption: Waking up to your smart phone (charging overnight), putting on the coffee, pouring the cold milk from the fridge, taking a shower, driving the car to work and walking into your air-conditioned office. Likewise, the rest of your day will be one big consumption of energy. The world’s energy resources are primarily extracted from “volatile” or underdeveloped regions, creating a real risk of disruption of supply. Herein lies a clear and quantifiable risk.

The way I measure this geopolitical risk is through measuring the spread between the 5th contract of WTI crude oil and the first contract. Of course, there are other factor at work, but in the absence of a better alternative, I use this. 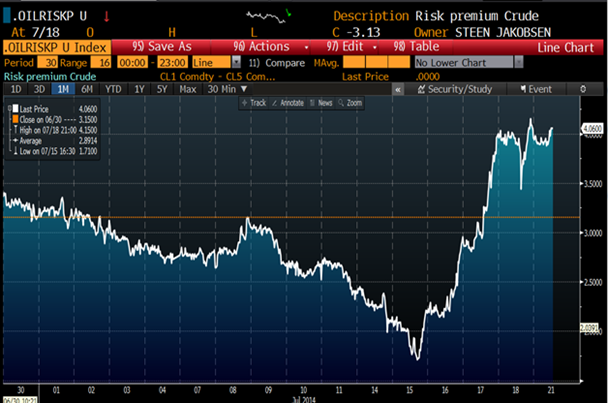 As can be seen, since July 15 the “war premium” or more neutral “disruption premium” have increased by USD 2 and the world’s consumers are now paying two dollars more per barrel of WTI crude. Overall there are many factors influencing the crude market but the price of energy remains the one component we need to know is stable and preferably falling.

The overall impact from war is negative despite the glorified analysis of how World War II stopped the recession – think of the 1970s – probably a better and more relevant analogy to today’s trouble in Gaza, Iraq, Russia/Ukraine, Libya, and Syria. Many will argue it’s different this time, back then we were too dependent on the Middle East!  Sure, but prices were only between 10 and 25 US dollars a barrel back then! 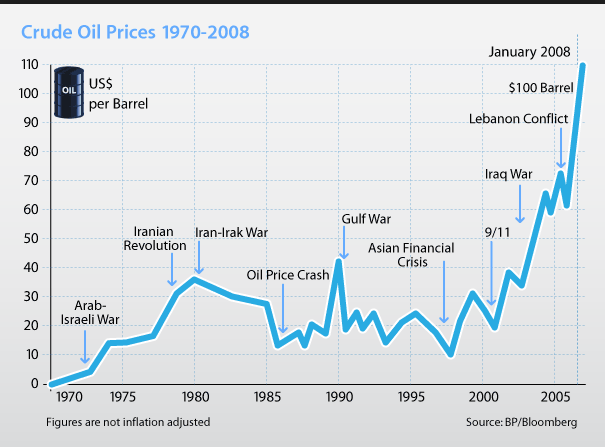 Now we have lived with an oil rise in excess of  USD 100 more or less since 2007! Crude is now four times higher in price than during the “inflationist” 1970s – the era in which we ended  the Bretton Woods system of monetary management and where central banks started targeting inflation instead.

No, the signal from the energy market about the demand of energy and the risk of getting enough of it is clear: Prepare for less growth, less certainty and more geopolitical risk. The market, however, maintains a steady hand: Israel will be contained inside a couple of weeks, Russia vs. Ukraine will find a solution. The non-acceptance of tail-risk (Black Swans) is clear for everyone to see. The market is “perfect” in its information, zero interest rates will save us and we have all been fooled into believing that the real world no longer matters.

Unemployment, social inequality, wars, innocents being killed, and TV images of people fighting to live another day are not relevant………except for the fact that for world growth to keep increasing we need to continue to see growth in Africa, the Middle East and Eastern Europe.

We need to accept that the world is now truly global – we smiled while globalisation reduced prices and made our companies more profit, now the escalation of wars reflect a world where growth is low, energy is expensive and increasingly hard to get and that we have gone full circle with macro and interventionist policies.

The escalation of turmoil in the world is yet to play a role for the market, but be warned: everything economic has a delayed reaction of nine to twelve month – whenever there is an action there will be a reaction. If the present state of alertness continues through the summer you can bet on higher energy prices having a serious impact on not only world growth but also on markets. But don’t ever forget that the real losers are the individual families losing loves ones. No, Camus got it right. There is nothing worth killing for, plenty to fight for.

Fair enough but I disagree. The Gaza and Ukrainian conflicts are very unlikely to draw greater powers into conflict and that’s what matters to global markets. It’s actually energy supply from Russia that’s preventing it so let’s not get too upset by a small premium built into prices there.

The conflict that represents the largest potential threat to markets is still the ISIS invasion of Iraq. There oil supply could be severed and the jockeying among regional middle powers possibly lead to a wider scale conflagration between Sunni and Shia sponsor states.

Oil is at $100 owing to its peak production and the challenge that that represents not because of any exogenous geopolitical problem. Minor premia built into energy markets are sensible enough but they are not signalling some wider move to war discounts, nor should they be, until greater powers come to blows.