Yves here. There has been so much anticipation of the seemingly inevitable next financial markets crash that it’s easy to brush off yet another market call. But given Rajan’s track record, it’s worth at least listening to his reasoning.

It’s noteworthy, however, that post author Llewellyn-Smith sees no crash detonator prior to 2016, which might as well be 2025 as far as most investors are concerned. I have no idea what the timing will be, but the focus on financial/asset markets as the trigger seems unduly narrow. Geopolitics are vastly more fraught than in the runup to the global financial crisis, and we also have more unstable weather, such as the drought in California, which is certain to put pressure on food prices in the US. In other words, it appears that real economy risks, which are often wild cards, are not adequately factored into these “when might the wheels come off” exercises.

The Wall Street Journal is reporting that:

Reserve Bank of India Governor Raghuram Rajan warned Wednesday that the global economy bears an increasing resemblance to its condition in the 1930s, with advanced economies trying to pull out of the Great Recession at each other’s expense.

As was the case in the 1930s, the lack of coordination between policymakers is producing spillovers that may be difficult to control, and the world’s financial system may soon face fresh turbulence at a time when central banks have yet to repair the damage that the 2008 financial crisis caused to developed economies.

“We are taking a greater chance of having another crash at a time when the world is less capable of bearing the cost,” said Mr. Rajan in an interview with the Central Banking Journal.

Before you write this off as the ramblings of a subaltern crackpot, recall that it was Raghuram Rajan that warned in August 2005 that:

Developments in the financial sector have led to an expansion in its ability to spread risks. The increase in the risk bearing capacity of economies, as well as in actual risk taking, has led to a range of financial transactions that hitherto were not possible, and has created much greater access to finance for firms and households. On net, this has made the world much better off. Concurrently, however, we have also seen the emergence of a whole range of intermediaries, whose size and appetite for risk may expand over the cycle. Not only can these intermediaries accentuate real fluctuations, they can also leave themselves exposed to certain small probability risks that their own collective behavior makes more likely. As a result, under some conditions, economies may be more exposed to financial-sector-induced turmoil than in the past. The paper discusses the implications for monetary policy and prudential supervision. In particular, it suggests market-friendly policies that would reduce the incentive of intermediary managers to take excessive risk.

He issued this warning at the FOMC’s Jackson Hole gathering where he was greeted with genteel jeering and was publicly dressed down by Larry Summers.

Rajan was proven very precisely to be right. Unfortunately he is almost certainly right again this time. The only question is when.

On that I’m on the record arguing that the Chinese property market may trigger the event some time after 2015. But another scenario that is a persuasive alternative is the Jeremy Grantham theory of a 2016 bubble bust for US markets following its Presidential election. On that Goldman today provides a nice trigger: 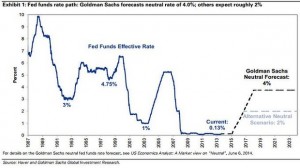 If we ever reach 4% I will very happily eat my hat.