The other day my friend Rohan Grey — a lawyer and one of the key organisers behind the excellent Modern Money Network (bringing Post-Keynesian economics to Columbia Law School, yes please!) — directed me to an absolutely fascinating piece of writing. It is called ‘Taxes For Revenue Are Obsolete’ and it was written in 1945 by Beardsley Ruml. Ruml was the director of the New York Federal Reserve Bank from 1937-1947 and also worked on issues of taxation at the Treasury during the war.

The article lays out the case that taxation should not be focused on revenue generation. Rather, Ruml argues, it should be thought of as serving other purposes entirely. He writes: 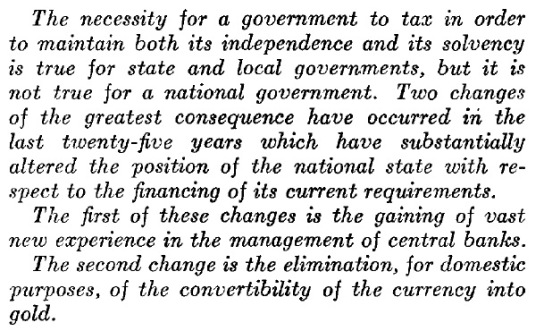 Basically Ruml is making the same case that the Modern Monetary Theorists (MMTers) make: a country that issues its own sovereign currency and is unconstrained by a gold standard does not require tax revenue in order to fund spending. This is because the central bank always stands by ready and able to buy any sovereign debt issued that might lead to the interest rate rising. Indeed, it does this automatically in the way that it conducts its interest rate policy. Ruml then outlines what taxation is really for in such a country. 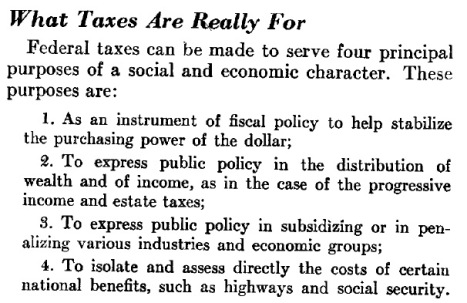 This is a fantastic summary and I really couldn’t put it better myself. The interesting question, however, is why people were making such statements at this moment in history? It should be remembered that the economist Abba Lerner had published a paper entitled ‘Functional Finance and the Federal Debt‘ just two years earlier which made a very similar case. In that classic paper he wrote: 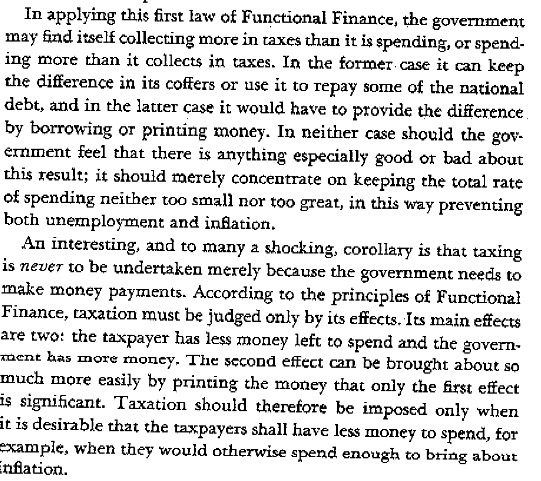 So, what was it about this moment in history that allowed for such a clear-eyed view of government spending and taxation policies? The answer is simple: the war. World War II allowed economists, bankers and government officials to see clearly how the macroeconomy worked because the government was basically controlling the economy. World War II was perhaps the only time in history when capitalist economies were run on truly Keynesian principles. (You can make a case that the Nazi economy in the 1930s was also run on these principles, however, so perhaps it is better to say: a capitalist economy in a democratic state).

This meant that those working in government institutions and banks could see exactly what was happening and why it was happening. Because the central banks were exercising full control over the market for government debt and because the governments were running massive fiscal deficits it became crystal clear what the taxation system was really doing: first and foremost it was suppressing aggregate demand for goods and services in certain parts of the economy. In doing so it had two broad functions: an anti-inflation function and a redistribution function.

The experience of the war, I would argue, was the main reason why the neo-Keynesian economists in the US actually understood macroeconomic policy in a clear-sighted way. I do not believe that their theories would have allowed them to properly understand the economy. But their experiences in the war — from reading the daily newspapers to working in economic institutions — left a lasting impression that allowed them to properly understand the macroeconomic policy tools in the 1950s and 1960s. The textbooks that they were teaching said one thing but their experiences in the war told them another. (An exception to this might be James Tobin whose theoretical writings do reflect some of the war experiences).

When the younger generation came of age in the 1970s the mainstream economic theory ensured that they had absolutely no idea what they were talking about. They only had what they were being taught in the classroom and did not have the real-world experience that the older generation had. Everything went downhill from there and that, I think, is where the seeds were sown for the economic turmoil and confusion we live with today. It is also the key reason why the economists of the next generation must be taught in an entirely different way from the previous generation.

People like Rohan Grey and his colleagues in Columbia Law School as well as the blogs are having an enormous effect in this regard. But the mainstream institutions simply cannot respond because they are filled with dinosaurs who sense their underlying irrelevance. This makes them defensive and basically impossible to deal with. Nevertheless, events today are also having their own effect, even if these are not as pronounced as the effects that World War II had on the economists of the day. The failure of the QE programs to generate employment was a key step in giving people a clear-sighted view of what monetary policy is and how it works (or doesn’t!). While the clear stagnation that has set in after the crisis may help to loosen the idea of long-run full employment equilibrium that the mainstream holds so dear. Again, the mainstream will likely retain such ideas in theory, but they will probably be easier to deal with in practice. We’ve seen this movie before. It doesn’t end well. But it makes our lives easier in the short-run and puts the mainstream on the defensive with regards theory.

Meanwhile, there are a couple of people who might be considered the Rumls of our time. Former Deputy Secretary of the Treasury Frank Newman is a good example of this. His book Freedom From the National Debt is a document on par with Ruml’s excellent 1945 article. He has also got some play in the national news media. But not nearly enough of course. I will leave the reader with a short clip from Fox News where Newman makes very clear that the national debt in the US is a misnomer and not a huge concern (for a more in depth analysis by Newman try this talk given by Newman at the Columbia Law School)**

**Note that the case Newman makes in the Fox News clip is the same that I was making in this post. It is an argument that basically allows us to show that the endogenous money argument largely works even if we ignore central bank action and it runs directly contrary to the narrative embedded in the ISLM.