This is Naked Capitalism fundraising week. 88 donors have already invested in our efforts to shed light on the dark and seamy corners of finance. Join us and participate via our Tip Jar. Read about why we’re doing this fundraiser, what we’ve accomplished in the last year, and our current target.

Yves here. Can someone please send this VoxEU post to whoever is in charge of the American oligarch class? Of course, as someone who works too long and at strange times myself, I can’t hold them responsible. Or should I? Working these bizarre hours is necessary for me to have a viable business. So the boss me is mean to the employee me. Many of the expectations (and margins) for what I do are socially determined. But not only do extreme and off-cycle hours lead to stress on families, they also leave little (as in no) time for community and civic activities. The resulting weak social ties look like a feature, not a bug.

American employees put in longer workweeks than Europeans. They are also more likely to work at undesirable times, such as nights and weekends. This column argues that the phenomena of long hours and strange hours are related. One possibility for this is cultural – Americans simply enjoy working at strange times. Another, more probable explanation, is the greater inequality of earnings of low-skilled workers in the US, compared to Europeans.

The Facts on Work Hours and Timing

The average US workweek is 41 hours, 3 hours longer than Britain’s and even longer than in Germany, France, Spain, or the Netherlands (see the Table below).

Over a year, the average American employee puts in 1,800 hours, which is more than any other wealthy country, even Japan. What is remarkable is the change during the past three decades. In 1979, Americans looked little different from workers in these other countries, working about the same number of hours per year as the French or the British, and many fewer hours than Japanese. Since then, employees in other countries have begun to take it easier, to enjoy their riches, but Americans have not.

The picture is even bleaker than these numbers suggest. Not only do Americans work longer hours than their European counterparts, but they are much more likely to work at night and on weekends.

Work on weekends is also more common in the US than in other rich countries, with 29% of American workers doing some work on weekends, far above Germany, France, Spain, and the Netherlands; and even in the UK only 25% of employees do some work on weekends. But despite their greater likelihood of working at these strange times, those Americans who work then put in no more hours per day than the smaller numbers of European workers who are on the job at nights and weekends.

Table 1.  Characteristics of work hours in the US and elsewhere: Amounts and timing 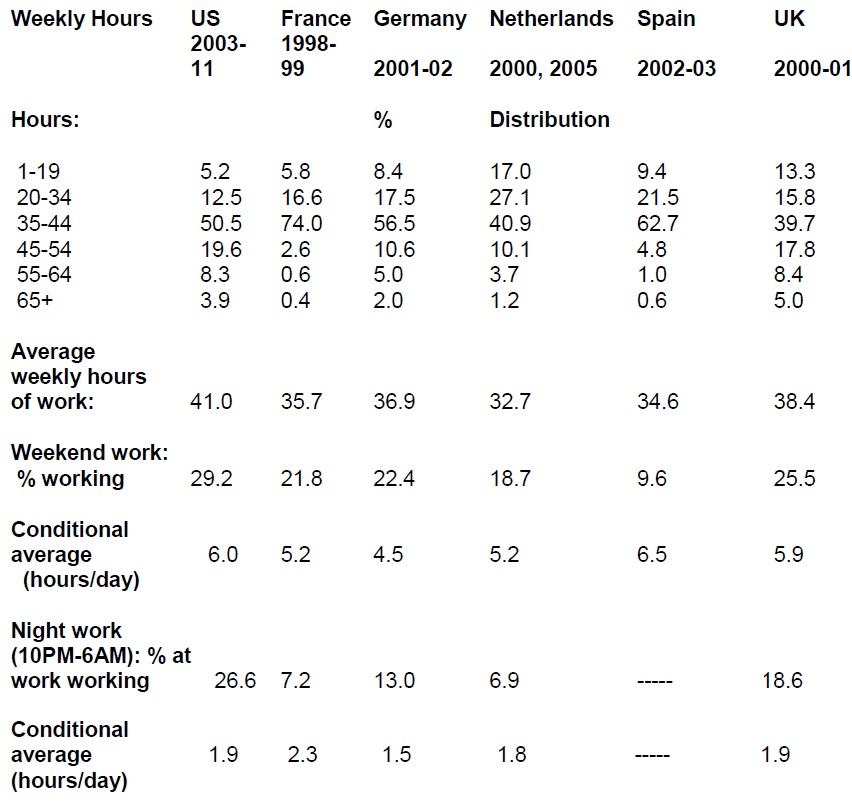 Why These Facts Matter

Weekend and night work is not attractive to most workers. Unsurprisingly, therefore, it generates, on average, higher pay per hour than work at ‘normal’ times—wage differentials that compensate for the undesirability of working at unattractive hours (Kostiuk 1990). Also unsurprisingly, it attracts workers with the least human capital. In the US and Germany, young workers, those with less education, and immigrants are more likely than other employees to work at these times. In the US, minorities are also more likely to perform weekend and night work (Hamermesh 1996). The burden of working at unpleasant times falls disproportionately on those who have the least earning power.

Are the Phenomena Related?

If Americans’ workweeks were shortened to European levels, would their likelihood of working at these strange times drop to European levels? Do the American labour market, institutions, and culture make night and weekend work more prevalent independent of the length of the workweek?

To answer the titular question of this section, we examine the determinants of the probability of night work using data from various time-diary surveys for the US and France, Germany, the Netherlands, Spain, and the UK. For the US, we relate these probabilities to workers’ weekly work-hours and a large number of their demographic characteristics—age, immigrant and urban status, educational attainment, and others.

If we simulate what would happen to the probabilities of weekend and night work if the US had the same distributions of weekly work-hours as each of the 5 European countries, not surprisingly, those probabilities would drop — but not very much. Even with France’s short workweeks, 25% of American employees would still be working on weekends, as high as the highest percentage in any of these 5 countries; and 22% would still be working at night, well above even the highest percentage in Europe. Even if no American worked more than 45 hours per week, the percentage performing weekend work would fall only to 24, and the percentage doing night work would fall only to 25.

Even with a reduction in American workweeks that lowered American work-hours down to European hours, Americans would be doing more night and weekend work than Europeans. Looking at time-diary data from the mid-1970s, this result should not be surprising. For example, at that time 26% of American employees worked on weekends, whereas only 14% of Dutch employees did so, both about the same as today, even though the Dutch and American workweeks were then much closer in length than they are today.

Why, and What to Do (if Anything)?

Many European countries impose penalties on work at nights and on weekends, with some of the penalties being quite severe (Cardoso et al. 2012). The evidence in Cardoso et al. (2012) suggests that imposing penalties on night and/or weekend work will reduce its incidence. Work at different times of the week is substitutable, and employers are responsive to changing incentives to alter the timing of work. But that evidence also shows that even substantial incentives do not produce huge changes in work timing. If we really want to reduce the amount of work that occurs at times that are viewed as unpleasant, the solution may be to revert to the shop-closing laws (Blue Laws) that prevailed in the US years ago. No free-marketer would like this, but it may well be worth reviving these laws in order to get the US out of what might be a low-level, rat-race equilibrium.