This is Naked Capitalism fundraising week. 90 donors have already invested in our efforts to shed light on the dark and seamy corners of finance. Join us and participate via our Tip Jar. Read about why we’re doing this fundraiser, what we’ve accomplished in the last year, and our current target.

Yves here. This post describes the “new normal” of the role bank reserves play in hitting short-term policy rate targets in the US. The author ends on a cheery note about how the abnormal-looking situation we have, in particular super-low interest rates, could persist for a very long time. The author contends that the way one reacts to these new procedures and their results will reflect your monetary aesthetics, as in your beliefs about the way central bank balance sheets and reserves should look. However, given the way that negative short-term real interest rates are stoking financial speculation at the expense of real economy investment (a trend that was already well underway even before the crisis containment program turbo-charged it), one can hardly see a continuation of the new normal of low growth and redistribution to top earners as a positive development.

By Jérémie Cohen-Setton is a PhD candidate in Economics at U.C. Berkeley. Originally published at Bruegel

What’s at stake: Since 2008, the asset purchases made under QE have increased drastically the aggregate level of bank reserves, thereby weakening the control of the Fed’s federal funds rate. On Wednesday 17 September 2014, the Federal Reserve announced a revised plan for the mechanics of how it will raise interest rates from near zero despite large excess reserves.

The primary tool for moving the fed funds rate will be the interest rate the Fed pays on the money, called excess reserves

Real Time Economics writes that as part of the so-called exit strategy, the Fed will continue to rely on its benchmark federal funds rate, an overnight interbank lending rate, as the key rate used to communicate Fed policy.  But the primary tool for moving the fed funds rate will be the interest rate the Fed pays on the money, called excess reserves, that banks deposit at the central bank. The Fed also will use an interest rate it pays on trades called reverse repurchase agreements, or reverse repos, to help ensure the fed funds rate stays in its target range.

The Old Way of Raising Rates

Michael Woodford writes that it will be an interesting experiment in monetary economics because the Fed will be attempting to control short-term interest rates in a situation where almost certainly its balance sheet is going to be unusually large. That means that there are going to be extraordinary quantities of excess reserves in existence, and this means that Fed control of short-term interest rates will not be achievable in the way that it always was in the past: through rationing the supply of reserves. The Fed would maintain a fairly small supply of reserves, small enough that there was indeed an opportunity cost of reserves, and it could adjust that opportunity cost fairly precisely through relatively small changes in the supply of reserves.

John Cochrane illustrates in the figure below the standard story for monetary policy, and one option for the Fed when it wants to raise rates. In this story, the Fed controls interest rates by rationing the amount of non-interest-paying reserves. Banks must hold reserves in proportion to their deposits. If the Fed sells bonds, taking back reserves, the banks must get along with fewer reserves. They bid up the Federal Funds rate they pay to borrow reserves from each other. Treasury rates and other rates rise by arbitrage with the Federal Funds rate. So all interest rates rise. 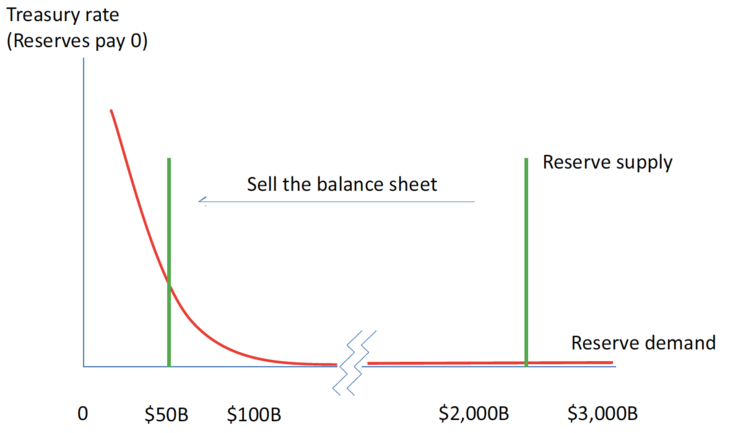 The New Way of Raising Rates

Todd Keister, Antoine Martin, and James McAndrews writes that recently, attention has turned to an alternative approach to monetary policy implementation by effectively “divorcing” the quantity of reserves from the interest rate target. The basic idea behind this approach is to remove the opportunity cost to commercial banks of holding reserve balances by paying interest on these balances at the prevailing target rate. Under this system, the interest rate paid on reserves forms a floor below which the market rate cannot fall. The Reserve Bank of New Zealand adopted a particular version of the “floor-system” approach in July 2006. 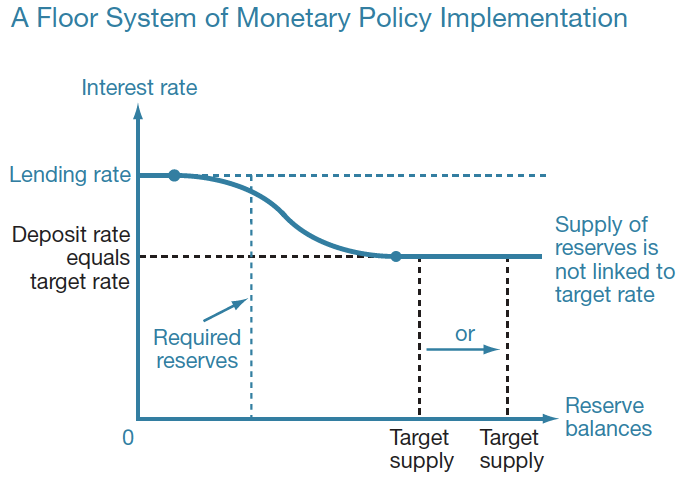 Todd Keister, Antoine Martin, and James McAndrews writes that the key feature of this system is immediately apparent in the exhibit: the equilibrium interest rate no longer depends on the exact quantity of reserve balances supplied. Any quantity that is large enough to fall on the flat portion of the demand curve will implement the target rate. In this way, a floor system “divorces” the quantity of money from the interest rate target and, hence, from monetary policy. This divorce gives the central bank two separate policy instruments: the interest rate target can be set according to the usual monetary policy concerns, while the quantity of reserves can be set independently.

In its press release, the FOMC writes that during normalization, the Federal Reserve intends to move the federal funds rate into the target range set by the FOMC primarily by adjusting the interest rate it pays on excess reserve balances. During normalization, the Federal Reserve intends to use an overnight reverse repurchase agreement facility and other supplementary tools as needed to help control the federal funds rate.

Real Time Economics writes that since the authority to pay interest on reserves does not extend to other participants in short-term rate markets, such as government-sponsored enterprises and money market funds, the central bank has developed so-called overnight reverse repurchase agreements that allow it to withdraw liquidity from the system even from non-banks.

The FOMC writes that it intends to reduce the Federal Reserve’s securities holdings in a gradual and predictable manner primarily by ceasing to reinvest repayments of principal on securities held in the SOMA. John Cochrane writes that the Fed should stop referring to “normalization” when it talks about reducing the size of its balance sheet. The Fed may discover that a huge balance sheet, reverse repos for everyone, and even near-zero rates and zero inflation are a permanent and healthy policy configuration. If you’ve called tiny reserves that don’t pay interest “normal,” it’s going to be awfully hard to accept that the “new normal” is just fine.