Lambert here: If the policymakers have turned the US into Japan, we’re looking at 20 years of a flatlined economy, punctuated (this being the US) by explosions. Could that be the why 5- and 10-year yields have diverged?

What’s at stake: Fed tapering was widely expected to push up US yields. Instead, US yields have fallen since the beginning of the year, raising the question of whether we’re seeing a new version of the Greenspan 2005 conundrum. Interestingly, a successful explanation of this new conundrum cannot just rely on a flight to safety explanation as it also needs to rationalize why 5-year yield and 10-year yield have diverged over the same period.

Jeff Sommer writes that yields have been falling with embarrassing consistency in 2014 despite forecasts to the contrary from most Wall Street analysts at the beginning of the year. David Beckworth writes that the Fed has been tightening monetary policy with its tapering of QE3 and yet the benchmark 10-year treasury interest rate has been falling since the beginning of 2014. Marc to Market writes that moreover, the US market rally has taken place amid a tick up in both core and headline measure of consumer prices. 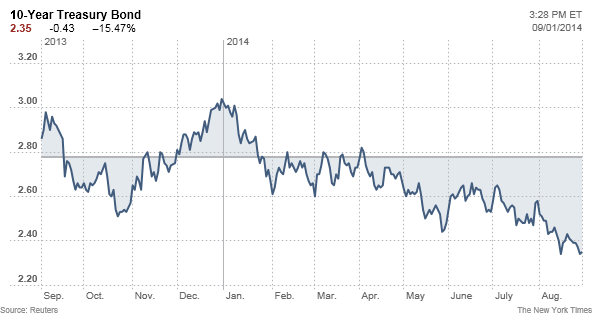 James Hamilton writes that as the U.S. economy returns to healthier growth, many of us expected long-term interest rates to return to more normal historical levels. But the general trend has been down since the end of the Great Recession. The 10-year rate did jump back up in the spring of 2013. But during most of this year it has been falling again.

In his famous 2005 testimony before Congress, Alan Greenspan noted that long-term interest rates [had] trended lower in recent months even as the Federal Reserve [had] raised the level of the target federal funds rate by 150 basis points. This development contrasts with most experience, which suggests that, other things being equal, increasing short-term interest rates are normally accompanied by a rise in longer-term yields. Calculated Risk writes that Mr. Greenspan is referring to the expectations theory of interest rates were long rates are the geometric average of expected future short rates plus a risk premium that would usually increase with duration of the instrument. This theory assumes that arbitrage between instruments of different durations will set the price. 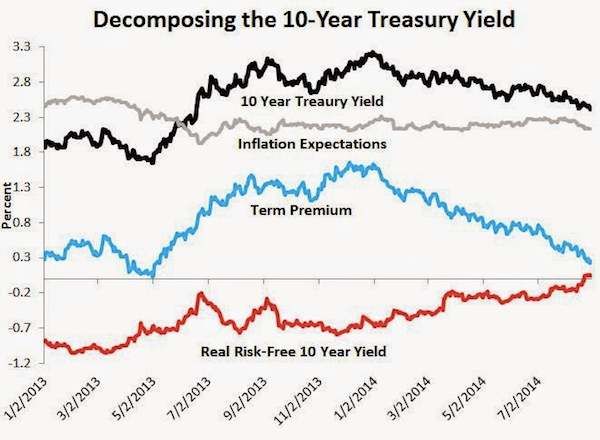 The Divergence of 5-Year and 10-Year Yields

James Hamilton writes that interestingly while the return on a 10-year Treasury has been falling for most of this year, the 5-year yield has held fairly steady. If investors are risk neutral, the drop in the forward rate during 2014 indicates that something happened this year to persuade people that rates in the future (for 5 to 10 years from now) were going to be lower than they had been expecting.

Robin Harding and Michael Mackenzie write that this is unprecedented: no other global shock going back to the 1960s has ever caused US 5 and 10-year yields to diverge like this. 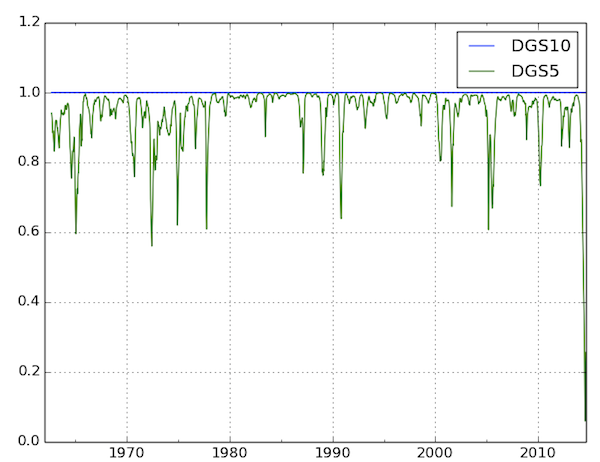 James Hamilton writes that it’s hard to attribute it to changing perceptions about the Fed, which should surely matter more for the next 5 years than they would for 5 to 10 years from now. More confidence that the U.S. government will be able to keep debt from growing relative to GDP over the next decade may have played a role. Another possibility is that more people are starting to take seriously the suggestion that we’re on a path now of secular stagnation with weak economic growth and poor investment opportunities over the next decade. But that’s hard to reconcile with the stock market, which climbed impressively this year.