The Fed’s Survey of Consumer Finances came out yesterday, and it offered a pretty good answer for why the country won’t just snap out of it and admit that Recovery Summer is here. The survey covers 2010 to 2013 and it’s stocked with interesting data, but the main point is the continued breaking away of top income earners from the rest of their counterparts. McClatchy summarizes:

Americans’ average income of grew by 4 percent from 2010 to 2013, a misleading number since it was pulled up by the richest Americans who grew wealthier during the period, according to a Federal Reserve report released Thursday.

In its Survey of Consumer Finances, conducted every three years, the Fed found that while average income rose by 4 percent, the midpoint income for American families actually fell 5 percent “consistent with increasing income concentration during this period.”

Translation: The growing wealth of the richest Americans pulled up the average. It’s the same phenomenon as if you and Microsoft founder Bill Gates pooled your salaries, you too would be a billionaire.

Matthew C. Klein supplies the charts, and they’re quite striking. Median income has dropped 12.4 percent since 2004, a dramatic decline in fortunes: Good news, the gains are not only accruing to the top 1 percent of the distribution. More like the top 3 percent: 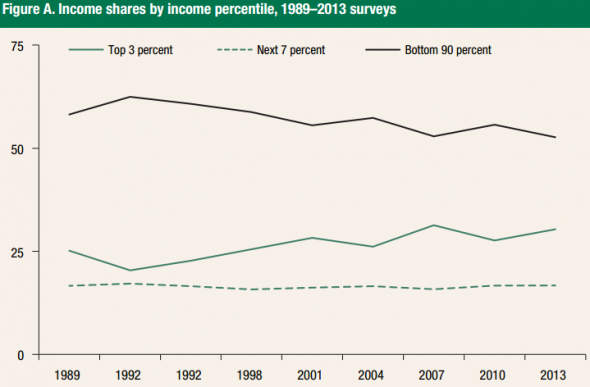 Looks like the rest of the top 10 percent have flatlined, while the bottom 90 percent have a lower income share than they did in the late 1980s. Median net worth is down at early-1990s levels.

The full report is available here. Maybe the absolute worst thing it says is that the data seemed to reflect a “return to trend.” In other words, this increasing income concentration and declines in real incomes at the bottom of the scale is just the way we roll these days.

The public understands this far better than those inside the palace walls of Versailles. While Washington struggles to decipher why those ingrates in the middle class can’t feel the magic of the current economy, those living in it for their entire lives get the message.

Public opinion surveys consistently show pessimistic views of the economy for the broad mass of people. Growing numbers believe the Great Recession led to a permanent change in the economy, which is probably something less than true – with few exceptions, these wage and income trends have been consistent since the late 1970s. But the other questions in this Rutgers poll appear right on the mark. Almost eight in ten Americans knew somebody laid off between 2008-2012. For leading indicators like low unemployment, affordable higher education, and job and retirement security, the majority of Americans think they will never see positive progress for many years. Just 16 percent of respondents thought job and career opportunities would be better for the next generation, a figure nearly four times lower than from 1999.

The reaction to this is either a resigned despair or the stirrings of social unrest, and just yesterday we saw quite a bit of the latter:

Hundreds of fast-food workers and labor allies demanding a $15-an-hour wage were arrested in sit-ins around the country on Thursday, as the protesters used civil disobedience to call attention to their cause.

Greater wages, protections and benefits for workers never comes without a fight, particularly given the extreme advantages afforded to management in the current structure. Labor unrest often – usually – turns bloody before too much changes. The low-wage worker movement is among the more exciting developments to come from a fairly depressing time in our economic history.

It’s clear that unrest will be the only recourse, rather than waiting on the current political class to do anything about this pervasive sentiment that the best years are in the rear-view mirror.