I just freed an innocent man from death row. And I’m still furious. Post Everything

Nevada’s share of Tesla plant could hit $1.3 billion Las Vegas Review-Journal. An unbelievable example of corporate welfare. Nevada is, amazingly, seen as the “winner” of the Tesla factory in some media reports. For context, the entire annual budget in the state of Nevada is $6.5 billion. So this is 20% of that, to one company, for (maybe, eventually) 6,500 jobs.

BP Found Grossly Negligent in 2010 Spill; Fines May Rise Bloomberg. Could be as much as $18 billion

Taylor Will Remain on Ballot in Kansas Political Wire

American slavery: Blood cotton The Economist. “Mr Baptist has not written an objective history of slavery. Almost all the blacks in his books are victims, almost all the whites villains.” What else was in this special edition of The Economist, “Jim Crow, Jim Schmo” and an alternate history of the Nice Nazis?

Joan Rivers, a Comedic Stiletto, Dies at 81 NYT obit. She was a giant. Angry, real, and a giant. Meanwhile, the state is investigating the outpatient facility where she met her demise.

The elephant that flew BBC Magazine

Antidote du jour (a screen grab from that incredible journey): 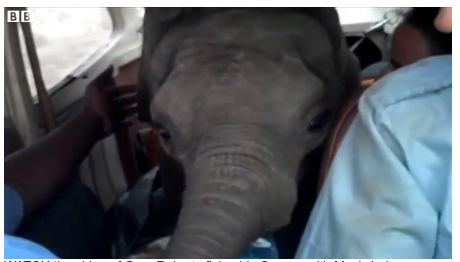