This week the Scots will vote on independence and the ghost of Bonnie Prince Charlie will ride once more… oh no! I’m not going there! Living in London and being from a country that declared independence from the crown last century I have seen up close all the cultural demons that the run-up to the Scottish vote has stirred up. It is not very pretty.

History is a funny old thing. It is something that people generally take as something resembling Holy Writ but in reality it is something that is written and rewritten over and over again. Reading the newspaper commentary in the run-up to the Scottish vote on both sides of what may soon be a border is like watching this rewriting take place before one’s eyes. Old events are summoned up and old prejudices simmer to the surface. The starting point of historical rewriting — and historians do not properly appreciate this — resembles something between historical hermeneutics and schoolyard joshing.

Anyway, let’s try to focus on the economics, shall we? I could write an eloquent post giving my little interpretation of the forthcoming election. But that would just be my opinion — the opinion of an Irish-born London resident whose ancestor appears to have been an English Catholic who fled to Ireland after he lent his support to the Jacobite cause in 1715. Another little story floating on a sea of other stories, each of them individual myths that contribute to the push and pull of the politics of this country. Better to drain the sea completely and try to catch a glimpse of the seafloor that supports it.

And here is a brief summary of the consequences of this for various currency regimes:

Frances Coppola and others have said that Scotland should issue their own currency and then peg it to the sterling. This would simply lash the same constraints on Scotland as maintaining the currency union. They would not control their interest rate and they would be unable to run fiscal deficits without having the sufficient reserves of sterling to back them up. Coppola says (on Twitter) that this is the “least bad option”.

The reason Coppola makes the case for a peg is because she reckons that there will be very little demand for a Scottish pound. She writes:

I don’t follow this reasoning. Scotland has a far more robust macroeconomy than the UK. Here is a graph from my Levy paper showing the sectoral balances of Scotland: 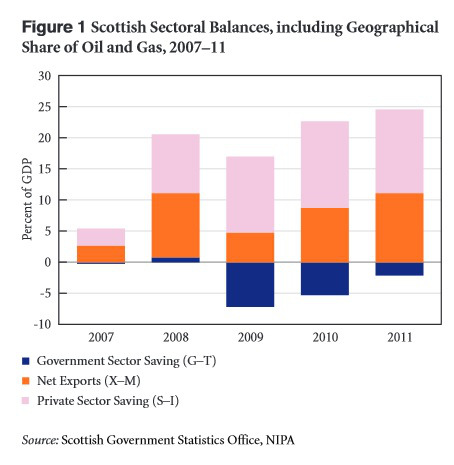 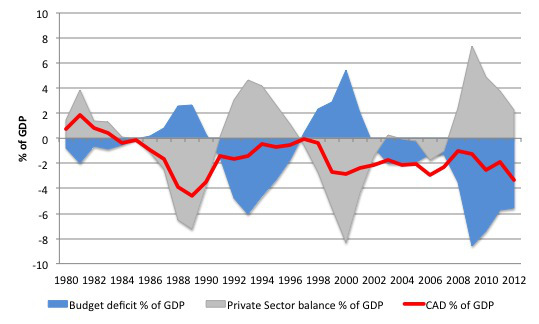 Now, is someone seriously going to make the case to me that a country that runs export surpluses of 5-10% of GDP a year is going to have a weak currency vis-a-vis a country that runs trade deficits of 2-4% of GDP a year? That is a bizarre argument and I hope that no one would take it seriously. Importers from other countries will need massive amounts of Scots pounds to buy those exports from Scotland. That will generate huge demand for the currency. Investors will soon see this and rush into Scottish capital markets.

Coppola may, however, have a point about the short-run and I noted this in my Levy paper. In the short-run God knows how investors will react. This is where my proposal comes in. I will not lay out all the details here but only the ones relevant to this discussion.

My plan is two-phase. In the beginning Scotland will have a dual currency regime. It will maintain the sterling but at the same time issue Scots pounds at a local level. It will do this by paying part of local public sector workers’ salaries in Scots pounds and also accepting these Scots pounds in payment of local taxes (I am open to the idea of accepting these for payments of national taxes too). In addition, the Scottish government should enforce that businesses in Scotland price their goods in both currencies. Some post-nationalist slogan would do wonders in this regard — something like “Scottish prices for Scottish people”; on this front the SNP can consult what I can only guess are their legion of PR people and focus groups.

After a while, this will establish a stable exchange rate between the sterling and the Scots pound. The Scottish government can then gradually increase the amount of transactions it undertakes in Scots pounds — eventually only accepting Scots pounds for the payment of any and all taxes. As more and more of the Scottish economy transitions to the Scots pound, Scottish exporters will begin to demand Scots pounds for goods and services because they will not want to have to exchange their sterling for Scots pounds. This will generate external demand for the Scots pound and lead to the gradual creation of a sophisticated international market for the Scots pound. The Scottish government and central bank should be holding the hand of the market every step of the way as this embryo develops into a child and then gradually reaches adulthood, at which point it can be allowed go into the world alone, fully formed.

The whole plan is based around the simple notion that exchange rates should be established gradually. Scotland’s economic fundamentals — so long as oil revenues remain buoyant — allow for the hope of a highly valued currency. But it is still uncertain what would happen if they float this on the market in a potentially explosive instant. A gradual approach would allow the demand for the pound — driven at home by taxation and domestic transactions and abroad by exports — to be established over a couple of years. The peg would not allow for this as any removal of the peg would result in a once-off adjustment that would be uncertain and potentially chaotic. The dual currency approach is much more organic and gradualist.

With a floating exchange rate regime in place the Scottish economy will be well placed to deal with economic shocks. Should oil revenues begin to decline for any reason the Scots pound can fall in value to register the necessary fall in real living standards required. Again, the gradualness of the process is the key to stability. In the case of a fixed exchange rate — that is, a peg — this would possibly lead to a nasty fiscal-cum-currency crisis as foreign reserves dried up. A floating exchange rate still allows the Scottish central bank to use their reserves to prop the currency up. But by not establishing a price target it does not incentivise speculators to do what they do best: speculate (see: Black Wednesday).

Scotland could then focus on their key long-term economic problem: namely, their over-reliance on oil and gas revenues. This requires massive public investment projects in fields like green energy that will allow Scotland to continue to export large amounts of goods and services moving into the future. By formulating the correct answer to the currency question the Scots can face the real economic challenges; those that have to do with the production of salable goods and the scarcity of natural resources. By ignoring the problem and taking a haphazard, poorly thought through approach — or, what is the same: simply emulating what they think to have been ‘done before’ — they risk everything, in which case they should probably just give up the whole game.

Finally a note on the politics. Some people will say: “Sure Phil, sounds like a good plan. Well thought through and all that. But it is too new. It sounds like something that has never been tried before, no politician would go for it.” First of all, while the plan is original most of the key components have been tried before — and with great success, I have not chosen these components arbitrarily. Secondly, the SNP is about to dissolve a union that is over 300 years old. This is a massive step into an uncertain new world — one we rarely see in our rather boring and repetitive politics today — and to compare my currency plan with this is to compare apples to oranges. Or, to make the metaphor more fitting by comparing something familiar with something exotic, it is like comparing apples with Jamaican ackee fruit.