Yves here. We are pleased to introduce Naked Capitalism readers to John Helmer, a Moscow-based analyst and journalist who, in the words of Mark Ames, “writes about the murky convoluted world of the extraction industry, its politics, and its oligarchs.” Given that the extraction industry is increasingly driving geopolitics, his beat overlaps with our “follow the big money” orientation. For instance, Helmer did original reporting on the IMF-Ukraine relationship which provided crucial to a recent Michael Hudson post on Ukraine that was first published at NC. Today he continues his look at how the US is funneling money into Ukraine, this time via a sus World Bank loan.

Helmer’s posts are a mix of Greeneland (as in Graham Greene), finance and politics. I trust you’ll find them instructive and more than occasionally entertaining. 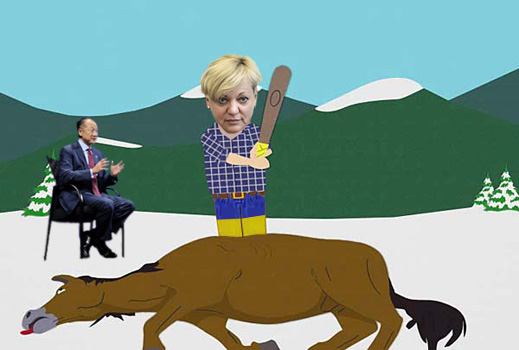 In the picture, the President of the World Bank, Jim Yong Kim, an American, is applauding as the Governor of the National Bank of Ukraine (NBU), Valeriya Gontareva, beats a dead horse. For the metaphorically minded, the dead horse is the Ukrainian banking system. For the literally minded, Gontareva claims the horse is alive and running healthily. Kim, Gontareva, and the horse appear to have their eyes wide open on the scene. Either that — or at least one of them is blinking at the truth.

On August 8, the World Bank paid $500 million to NBU. The term is for 16 years, with the first seven a grace period, and a variable interest rate once repayments start.

The new money was for the NBU to do what Gontareva has said publicly she has already done; and what the Ukraine mission of the International Monetary Fund (IMF) said on August 29 the NBU cannot begin to do properly. The $500 million comes on top of $1.48 billion the World Bank had already granted in May for purposes the Bank board claims to “to promote good governance, transparency, and accountability in the public sector.”

The World Bank board notice, issued on August 7, said the $500 million loan “operation aims to: (i) strengthen the operational, financial and regulatory capacity of the Deposit Guarantee Fund (DGF) for the resolution of insolvent banks; (ii) improve the solvency of the banking system through implementation of bank recapitalization/restructuring plans and timely enforcement action; and (iii) strengthen the legal and institutional framework to improve the resiliency and efficiency of the banking system.”

The Bank claims this is the “First Programmatic Financial Sector Development Policy Loan” (FSDPL1, in World Bank lingo) for Ukraine, and transferred the cash the next day. A second loan, called the Second Financial Sector Development Policy loan (FSDPL2), is already planned to follow next year. According to the NBU, the fresh cash should be collected in less than six months’ time. How much has not yet been disclosed.

On Tuesday of this week, a month after receiving the $500 million, the NBU issued a press release reporting on a meeting between Gontareva and Jinku Chandra, the World Bank’s chief for Balkan and Baltic bank bailouts. “In the course of the meeting, [Gontareva] informed the World Bank mission team about priority measures taken by the regulator to stabilize the banking system and the need to undertake structural adjustments when Ukraine is going through tough times. The parties also discussed the preliminary findings of the diagnostic studies, recapitalization and restructuring plans of the 15 largest banks by assets, as well as the ongoing diagnostic studies of the 20 next largest banks.”

Chandra is not exactly new to Ukraine. In 2009 he was on the receiving end of hospitality from Victor Pinchuk, one of the Ukrainian oligarchs backing the country’s political and economic alliance with the European Union and NATO. Before Chandra started working on Ukrainian banks, including Pinchuk’s Credit Dnepr, Chandra was employed by the World Bank in Serbia, Kosovo, and Bosnia and Herzegovina.

The NBU claims Chandra told Gontareva this week that he intends “to discuss in detail the potential measures supported by the FSDPL2, including measures aimed at improving the credit information system and enhancing the legal framework to reduce the share of non-performing loans. It is also important to discuss plans to elaborate potential contingency measures by Ukrainian banks and the need for a more detailed definition of the systemically important bank.”

According to the World Bank, its board Directors “encouraged the Bank to closely monitor overall implementation and the debt situation, and to expand its technical assistance to help authorities mitigate the high risks related to the bank restructuring program. They emphasized the importance of effective coordination among the World Bank Group, the International Monetary Fund, and other development partners to further advance critically-needed reforms.”

In point of fact, the preconditions for releasing the first $500 million have not been met. Gontareva and Chandra were jumping the gun on the second payout.

On July 18, the Bank issued a 48-page paper setting out the preconditions for the first loan, and the risks the money would disappear. The ranking individuals who put their names to the paper are Laura Tuck (below first left), Bank Vice President; Qimiao Fan (2nd left), Ukraine country director; and Alexander Pankov (3rd left), lead specialist on Ukraine’s financial sector. Tuck is American; Fan is Chinese; Pankov is Russian.

The paper acknowledged on its summary page that the risk of loan default is “high”. In a back-annex, the paper also conceded that “the risk of lack of follow-through action after FSDPL1 is significant considering that Ukraine’s previous financial sector DPL series in 2009-2010 was not satisfactorily completed after the first operation.”

In their report Tuck, Fan and Pankov weren’t exactly clear themselves on whether the $500 million had been paid to the NBU after Gontareva had met the World Bank’s preconditions; or whether the cash was paid in anticipation of her meeting her promise to meet the loan requirements. “The operation is anchored in nine prior actions, structured around three pillars”, the World Bank paper claims, as the tense of the verbs obscures whether the sinking metaphor has been followed by the erection metaphor, or vice versa. “The first pillar focuses on urgent actions that are necessary to minimize the risk of a loss of depositor confidence, through ensuring that the DGF can adequately perform its critical bank resolution and insured deposit payout functions. The second pillar focuses on ensuring that adequate solvency of banking system is maintained through implementation of bank specific recapitalization/restructuring plans. Finally, the third pillar supports legal and institutional reforms necessary to improve the resiliency and efficiency of the banking system.”

The “result indicators” from the combination of anchors and piles, er pillars, implies that three things have already been achieved by Gontareva, the NBU, and the leading Ukrainian banks. The “results” include “adequate financial capacity” on the part of the state’s deposit guarantee fund (DGF), “banking system adequately capitalized”, and “adoption of recovery plans by domestic systemically important banks”. 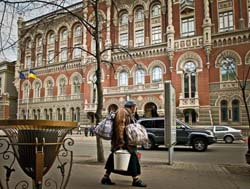 On August 15, Gontareva announced at the NBU (right) that “the fifteen biggest Ukrainian banks have already gone through a review and have not revealed any substantial problems…Now it’s the turn of the second group of 20 big banks. These 35 banks represent 80 percent of the country’s banking system. The World Bank’s $500 million loan will be used to deal with insolvent banks, with a substantial part of the money allocated to a Deposit Guarantee Fund.”

On August 29, the Ukraine staff of the International Monetary Fund (IMF) reported to the IMF board that nothing like the World Bank’s anchors and pillars have been achieved yet. Instead, the IMF found the NBU was running out of cash to meet the drawdowns required by the state budget and the system banks. According to the IMF, ““[The NBU’s] balance sheet is under strain because of the increasing holdings of government securities and liquidity support to commercial banks. The proportion of government securities and loans to banks increased from 28 percent of NBU total assets at end-2010 to 56 percent at end-April 2014. Second, the NBU’s financial autonomy has been undermined by advance profit distributions to the state budget, which were based on the annual state budget laws rather than permitted amounts under the NBU Law and have significantly eroded the NBU’s financial position…Finally, from a governance perspective, the assessment found that the NBU Council’s mandate is limited and substantial revisions to the NBU’s legal framework are needed to establish sound oversight arrangements of its daily management.” (Page 9.)

Instead of supporting Gontareva’s claim that she has already completed the required system bank audits, the IMF suggested this process has yet to begin. “Staff and the [Ukrainian] authorities agreed that proper procedures to monitor the quality of pledged loans, detect collateral quality deterioration, and seek its replacement by performing assets should be established in order to reduce the central bank’s risk exposure.”

In the small print of the World Bank staff report of July 18, the World Bank seemed to be saying the same thing. “Given the stress caused by the currency depreciation, a significant number of additional banks could be heading to the DGF for resolution in the coming months… The financial resources of the DGF will be strained in case of additional bank failures. The main source of DGF funding is the premiums collected from banks. The current assets of the DGF and the expected quarterly premium inflows are not likely to be sufficient to meet the insured depositor payout or resolution funding needs in the coming months. The assets of the DGF as of the beginning of June, 2014 were UAH 6.8 billion, which was close to the estimated maximum payout of insured deposits for the eleven insolvent banks that were put under temporary administration by the DGF since the beginning of 2014. Since the DGF’s level of financial resources is public information, its significant depletion or failure to comply with standard payout deadlines could lead to panic among depositors, withdrawal of deposits, and a further loss of confidence in the banking system. It is therefore imperative for the DGF to urgently obtain back-up funding from the GoU in line with the projected needs.”

The only prior actions the World Bank reported the NBU had undertaken to remedy this were the enactment of amendments to the State Budget Law for 2014, a cabinet resolution, the doubling of staff and consultants at the Deposit Guarantee Fund, plus the spending of more state budget money to pay their wages.

The World Bank report now reveals that the audits of the Ukrainian banks are a precondition for the second loan, not a performance requirement for the loan just released.

That is what an advertiser cares about, not someone who wants to influence the collective narrative.