Yves here. This post gives another vantage on the money versus happiness issue, this time through the lens of where people choose to live. And you can also find out what the happiest city in the US is. However, I know that city well and I would not be terribly happy there, so which leads me to question the premise of the article, that of of happy cities that are assumed to be a good fit for everyone.

Governments are now measuring happiness, or subjective wellbeing, and some have begun trying to maximise it. This column discusses recent research showing that happiness is not the same thing as utility. The choices people make suggest that they have desires and objectives other than happiness. It is therefore possible to make people worse off while increasing their reported subjective wellbeing.

Recent interest in the psychology and economics of happiness has had pronounced influence on public policy. The high-profile report by Stiglitz et al. (2009) epitomises a push for policies to explicitly promote increases in survey measures of wellbeing as a major social objective. Places ranging from the country of Bhutan to the city of Somerville, Massachusetts explicitly measure happiness, or subjective wellbeing, and strive for improvements over time in such measures.

We discuss the tensions surrounding the measurement of a personal or social welfare function using happiness data. Because resources are scarce, a push to improve happiness reallocates resources away from other desires or objectives. We discuss the theoretical problem with this effort. We then consider recent research about the distinction between happiness and utility. This evidence suggests that happiness is not equivalent to utility, so welfare economics does not justify happiness maximisation as a policy goal.
Interpretation of happiness relative to welfare

Economists define utility as a measure of individuals’ preferences over potential choices. A rich tradition of welfare economics builds on this simple choice-based concept to understand how various policies affect social welfare, whether for better or for worse. Importantly, this literature is based on a social objective function that reflects revealed preferences (Feldman 2008).

The appropriate interpretation of subjective wellbeing hinges on whether or not stated happiness measures utility. If it does not, then a policy to improve individuals’ stated happiness will not necessarily represent the choices those people would have made for themselves. In this case the policy cannot be justified based on traditional welfare analysis.

Empirical Evidence on the Relationship Between Happiness and Utility

In a series of novel experiments and surveys, Benjamin et al. (2011, 2012, 2013) conduct surveys about actual or hypothetical choices people make and measure the expected happiness associated with each choice. They find that actual choices and happiness-maximising choices are positively correlated. But they are not identical. Respondents are prepared to sacrifice happiness in furtherance of another objective, such as a higher income (Benjamin et al. 2011).

In Glaeser et al. (2014), we consider a similar distinction in the context of differences among metropolitan areas. Urban economics uses the concept of a spatial equilibrium (Rosen 1976, Roback 1982) to analyse an economy with many places where an individual can locate. In this equilibrium, people choose the locale offering the highest utility. This equilibrium concept explains numerous empirical realities (Glaeser and Gottlieb 2009) and is used for welfare analysis of policies that influence location decisions across cities (Glaeser and Gottlieb 2008, Moretti 2013, Diamond 2014).

In Glaeser et al. (2014), we measure subjective wellbeing across US regions using a large national survey. We use responses to a question in the Behavioral Risk Factor Surveillance System (BRFSS) conducted by the US Centers for Disease Control and Prevention (2005–2010), which asks,

“In general, how satisfied are you with your life?”

Possible answers are “very dissatisfied”, “dissatisfied”, “satisfied”, and “very satisfied”. We adjust the responses for demographic characteristics and sampling error.1 We can then determine each area’s subjective wellbeing for a comparable person.

We map these adjusted measures for each US metropolitan area and non-metropolitan region in Figure 1. (The Washington Post has produced another version of this map here.) We see that the Rust Belt, which includes areas such as Detroit and much of the Midwest, generally has lower subjective wellbeing than the rest of the country. From the mid-19th century the Rust Belt developed extensive manufacturing, but it declined significantly during the second half of the 20th century. New York City and much of California also have lower reported happiness, while the happiest areas are concentrated in the West, Upper Midwest, and rural South. 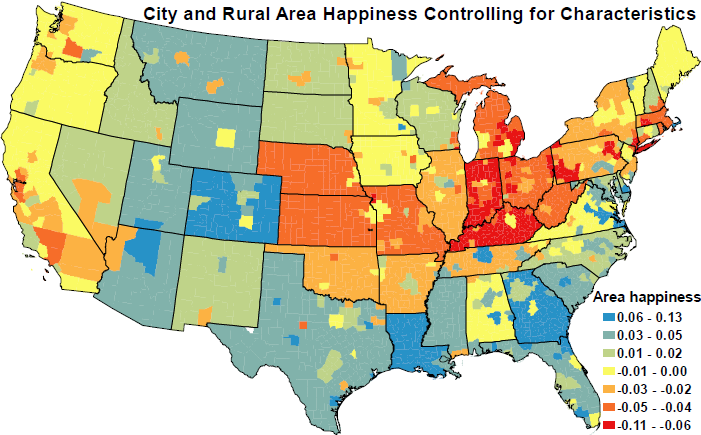 Notes: This figure shows each metropolitan and rural area’s adjusted life satisfaction, after controlling for demographic covariates in a mixed effects model. Data are from CDC (2005–2009).

When we examine relationships between life satisfaction and a range of area characteristics, the most striking fact relates to urban decline. As Figure 2 shows, cities experiencing the lowest population growth rates from 1950 to 2000 report significantly lower life satisfaction. This pattern shows up in our regressions with very strong statistical significance. It is robust to numerous specification checks and different assumptions about functional forms. 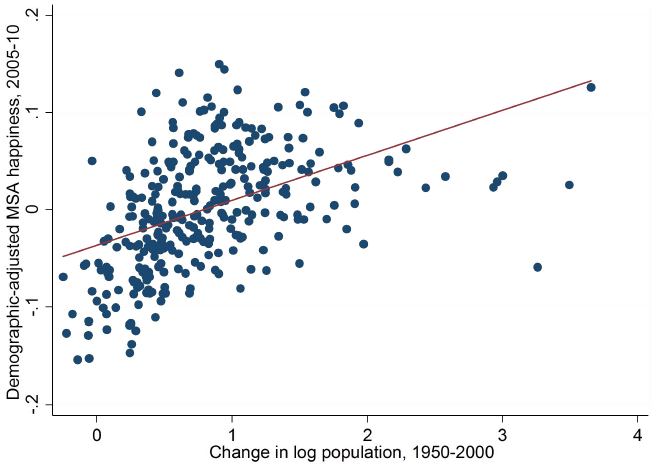 Notes: This figure shows each metropolitan and rural area’s adjusted life satisfaction, after controlling for demographic covariates in a mixed effects model, against Metropolitan Statistical Area population change from 1950 to 2000. Data are from CDC (2005–2010).

The welfare consequences of these differences depend on whether people are actively choosing where to live. If people are choosing to live in less happy areas when they have other options, this would suggest that they are making a conscious choice in favour of an area despite its low happiness. Figure 3 shows the distribution of population based on the happiness of the area where each person lives (as measured above). We show two distributions, one for people who moved between metropolitan areas from 2010 to 2011, and one for non-movers. For the movers, we use the adjusted life satisfaction of the new areas where they chose to live after the move.

Figure 3. Population distribution based on area happiness for movers and overall population 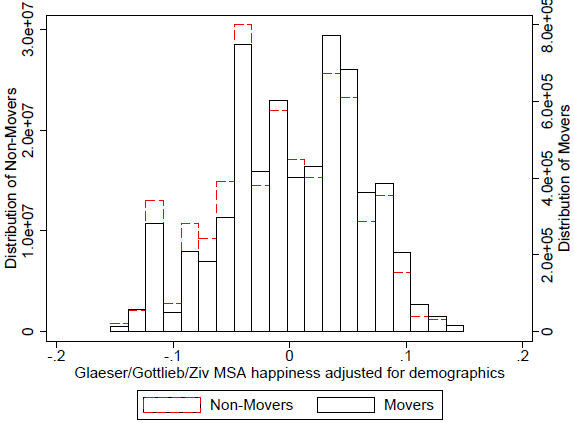 Notes: This figure shows the distribution of population by the happiness of the area where each person lives, and the distribution of movers based on their new area’s happiness. Happiness measures reflect each metropolitan and rural area’s adjusted life satisfaction, after controlling for demographic covariates in a mixed effects model using data from CDC (2005–2010). Migration data are from Internal Revenue Service (2012).

The figure shows a shift of population towards the happier areas on average. But there is still very substantial migration into unhappy cities. Eight percent of people who moved between metropolitan areas moved into an area in the bottom decile of subjective wellbeing.3 Unless these new arrivals experience different happiness than the long-term residents, it would not make sense for them to move to dissatisfied areas if they were trying to maximise their happiness.

To determine whether these migrants experience the low happiness of their new homes, we use another dataset, the National Survey of Families and Households (NSFH), to investigate the movers’ own subjective wellbeing after their moves. We find that the strong relationship between population decline and lower happiness that we documented in the BRFSS persists in the NSFH data on movers. This leads us to believe that the life satisfaction measures do not merely reflect the selection of unhappy people into particular places. The movers experience the low happiness of the area they have chosen, and yet they nonetheless choose to move there.

Why Would People Choose an Unhappy City?

Given that areas have different happiness levels, and some movers nonetheless migrate towards less happy locations, they appear to be looking for something other than pure happiness. Otherwise we might expect everyone to move to Charlottesville, Virginia – the happiest metropolitan area according to our measure. What are less happy areas offering to offset their sadness?

Our paper presents evidence that unhappy areas can compensate their residents with higher real incomes. We use historical survey data to show that larger, more productive cities were unhappy even during their more successful days. Residents were compensated for this unhappiness with better job opportunities and higher incomes. During the Rust Belt’s heyday, firms located in these cities for their natural advantages, such as access to waterways, that made up for the loss in happiness.

When the value of these natural advantages fell, and the cities became less productive, their populations declined significantly. These areas remain unhappy, but the population decline drove significant decreases in housing prices. This lowers the cost of living, so declining cities can offer surprisingly high real incomes to partly compensate for their lower reported wellbeing. This tradeoff is consistent with a model in which happiness is one component of utility. It is harder to reconcile with the idea that happiness is equivalent to utility, or is individuals’ ultimate objective.

How to Understand Happiness as Distinct from Utility

A long philosophical tradition presents normative arguments that appear consistent with the patterns of happiness across cities that we document. Epictetus (1916) wrote around 1900 years ago that deeper goals – such as freedom, nobility, and self-respect – ought to trump happiness.

We interpret our results in Glaeser et al. (2014) using a model that – building on Becker and Rayo (2008) – allows choices between happiness and other goals. Our particular application of these concepts, in the context of location choice, would not surprise Bernard de Mandeville (1714). He argued forcefully in The Fable of the Bees that it is perfectly sensible to choose busier, but less happy, locales. In the same vein, it was perfectly sensible for the medical students surveyed by Benjamin et al. (2013) to trade some happiness for the benefits of a higher-ranked medical residency.

Policy Implications of Happiness if it is Not Welfare

Increasing happiness is not free. The empirical evidence is clear that higher incomes increase happiness levels (Sacks et al. 2010), and cities such as Somerville are expending resources on projects intended to increase reported happiness. While some such projects may improve welfare, this is not guaranteed just by virtue of increasing happiness. It is possible to make people worse off while increasing their reported subjective wellbeing.

Given the subjective interpretation of survey responses, relying on subjective wellbeing data could generate misleading recommendations for policy efforts. If policymakers reallocate resources away from endeavours with known welfare gains on the basis of happiness surveys, these decisions could reduce welfare. Stiglitz et al. (2009) are undoubtedly correct that current measures of GDP do not perfectly capture welfare. But the theoretical and empirical literature on happiness teaches us to be cautious of redirecting resources away from tangible improvements in well-being towards more speculative objectives based on happiness measures.