In a remarkable and long-overdue change in attitude, institutional investors are starting to tell private equity titans that they think they don’t earn their outsized pay. And that’s before you get to all the grifting they’ve been exposed to be doing on top of that.

The Wall Street Journal described a confrontation at a conference in Paris, with a pension fund manager responsible overseeing private equity investments calling out the unjustifiable level of private equity fees. The reason this contretemps is striking is that it represents yet another fracture between private equity limited partners and the general partners who operate the funds over the rules of the game. It follows a simmering revolt in the UK over the general partners’ secrecy regime, which investors correctly see as an anti-compteitive practice that prevents them from negotiating better terms.

In the row in Paris, a manager at a Dutch pension fund described how private equity funds represented a mere 6% of fund assets yet represented over 50% of total fees paid. 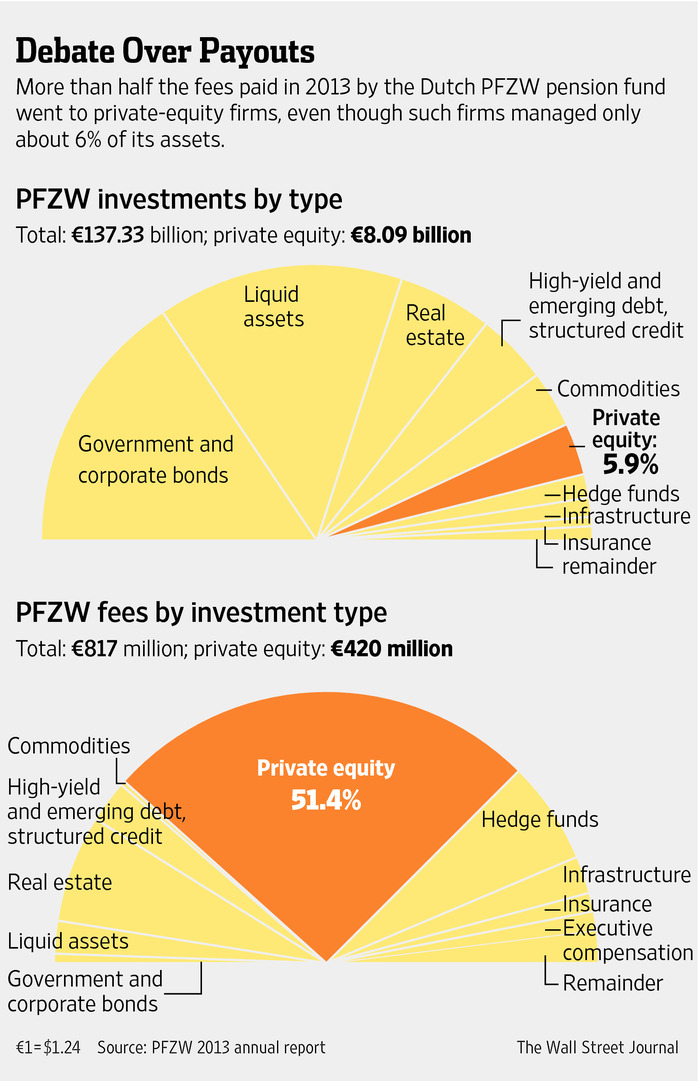 How does this incredible disparity come about? As Oxford professor Ludovic Phalippou explained in a 2011 paper, the prototypical 2% management fee, 20% profit share structure is deceptive. Remember that that 2% fee starts ticking as soon as the investor makes his commitment to the fund. But no money has passed hands. The private equity fund isn’t managing any money at that time, just on the hunt for deals. It typically takes several years for all the funds to be invested. Phalippou estimates that the effective management fee level, as a percent of funds at work, is a mind-boggling 4%:

As a first example, consider the basic management fees of 2%. Such fees are typically charged on the committed capital, not on capital invested by the fund. Ljungqvist, Richardson and Wolfenson (2007) report that on average, half of the capital committed to a private equity fund is actually invested.

The detailed example below is a representative fund, designed to be an average of a large dataset and hence representative of actual investor experience (click to enlarge). 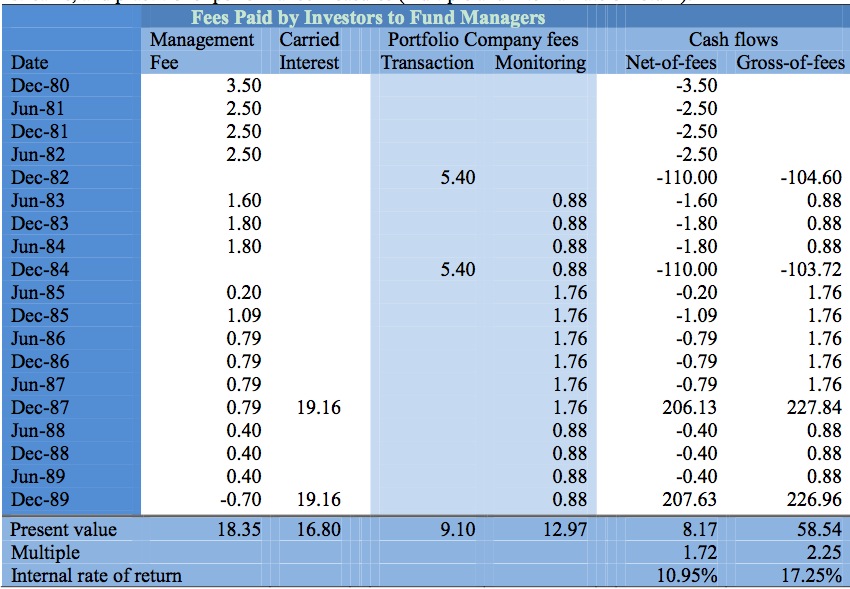 Remember that IRR makes returns look better than they really are, but this is metric the general partners have managed to get limited partners to accept. If the difference between a 17+% return and an 11% return didn’t get your attention, Phalippou explains further how the complexity of private equity fees are not standardized leads to more opportunities for mischief:

As another example of the importance of details, consider incentive fees. The broad outline of the incentive fees almost never varies from 20% of profits and an 8% hurdle rate, but much variation arises in the details of their calculation. Some funds start receiving carried interest when they have returned 8% per annum on capital committed; for others, it is when they have returned 8% per annum on exited capital. In the past, some funds would receive carried interest separately for each investment made. Some funds have a “claw-back provision” as described above for returning what turns out to be excess carried interest payments to investors, some do not…

Some buyout funds pay accrued interests when refunding the carry, some do not. The hurdle
rate is almost always 8%, but it can be soft or hard. The soft version is the one described
in the example above and leads to a payment of $19 million. The hard version means that the carried interest only applies to what is returned above 8% annual performance, which
leads to less than half of that $19 million payment. All these details make a large difference in fees paid

Phalippou’s assumptions are unduly charitable. Clawback provisions are designed so that they will almost never work in practice. The reason the clawback provision exists in the first place is that funds collect their upside fee on a deal-by-deal basis. That creates the possibility that the general partners get overpaid, since the profits on successful portfolio company investments can be more than offset by losses on the dogs. But as we explained, the mechanism that investors think solves this problem,the so-called clawback, doesn’t in practice. First, clever tax provisions included in how the clawback is calculated mean that the benchmark that the general partners wind up having to meet is much lower than the limited partners understood. An 8% hurdle rate is vitiated by the tax language. But not to worry. Even when the fund manages to underachieve its actual profit target, those clever general partners are usually successful in not giving back any money. They instead promise their investors a special deal on the next fund. In addition to preventing the promised settling-up, this ruse has the effect of rewarding failure, since it creates an incentive for a limited partner to invest in a new fund of a general partner that has clearly underperformed.

Other investors joined in the criticism, with Carlyle’s David Rubenstein making the tired observation that investors wouldn’t be able to attract the “talent” needed to acquire good companies.

In fact, if you look at the business model of many of the largest private equity firms, the “talent” resides in their sales skills, not in their investment acumen. KKR is the most extreme in this regard, basically acting as a thinly-staffed general contractor with the investment heavy lifting done by specialists like its captive consulting firm KKR Capstone, with as much as possible as expenses to the fund rather than as KKR’s overhead.

This anecdote from a reader who works regularly with private equity firms illustrates what the really important skills in that industry:

Truthfully, few deals I have ever seen PE get involved with have seemed good deals. They usually buy at the top. It has only been asset inflation that has always saved them.

Maybe this explains it. A few years ago I was working on something in the offices of a PE firm. An Australian I know comes in. We chat for a few minutes and he then goes into a meeting. The Aussie friend of mine says later, “Hey they called me down to meet on something. I did not know it was iron ore mining in Western Australia. When they brought it up and wanted to talk about it I told them I actually lived in WA and dealt with mining there. The PE guys go ‘Do you want to be the CEO for an iron ore mining business in Western Australia?’ I start telling them all of the problems in making this a doable business, especially the boom and bust nature. I would expect the Chinese demand for steel to go into the crapper at some time like the Japanese did in the 80’s. The senior partner looked at me and started laughing. He said, ‘We are not interested in the steak, just the sizzle.'”

The Journal article mentioned that more funds are looking into bringing private equity in house, but didn’t acknowledge that seven pension funds in Canada have gone that route. Not surprisingly, they’ve scored better results net of fees than industry averages, again proving that the “talent” is more focused on feathering its own nest than on delivering superior results for limited partners.

While so much vocal investor pushback is welcome, it’s important to recognize that so far, the opposition appears to be coming solely from investors outside the US. Recall that Europeans have been far less susceptible to the general partners’ claims that they are above question. The EU not only imposed tough registration requirements, but with them came limits on how much leverage the funds could use.

By contrast, despite the SEC’s stern warnings about widespread cheating in private equity and investor failure to take strong enough measures to protect themselves, there’s been a striking absence of any criticism of the private equity industry here. Instead, we’ve seen consistent signs of limited partners at most going through the motions of taking heed of the SEC’s findings. With complacency and intellectual capture so deep seated among supposed fiduciaries, it looks like it’s going to take more scandals and more public pressure to get US institutional investors to do their jobs as far as private equity is concerned.