Yves here. This article is an important sanity check on the impact of the current oil price war on Russia. We’ve seen similarly skewed conventional wisdom  on the Saudis:  “No, they can’t make it on a fiscal budget basis at below $90 a barrel,” completely ignoring the fact that the Saudis clearly believe it is in their long-term interest to suffer some costs to inflict pain on some of their enemies, and render some (a lot) of shale oil and alternative energy development uneconomical, which increases their ability to extract more in the long term from their oil asset.

By Colin Chilcoat, a writer at OilPrice. Originally published at OilPrice

After a frosty reception at the G20 summit in Australia this week, Russian President Vladimir Putin required some much needed rest, at least according to the official explanation given for his conspicuously early departure from the proceedings. All things considered it could have been a lot worse. Russia finds itself in familiar territory after a controversial half-year, highlighted by the bloody and still unresolved situation in Ukraine. Nonetheless, the prospect of further sanctions looms low and Russia’s stores of oil and gas remain high.

Shortsighted? Maybe, but Russia has proven before – the 2008 financial crisis for example– that it can ride its resource rents through a prolonged economic slump. Higher oil price volatility and sanctions separate the current downturn from that of 2008, but Russia’s economic fundamentals remain the same – bolstered by low government debt and a large amount of foreign reserves. Moreover, Western involvement in Russian oil and gas plays is more pronounced than ever.

Economic diversification has not come easy for Russia, arguably for a simple, but effective reason; oil and gas are a source of tremendous wealth for the country. However, the dire straits of the 2008 global crisis illustrated the importance of financial diversification. Since then, Russian state-owned oil and gas giants Rosneft and Gazprom have increasingly allowed Western majors like BP, Eni, Exxon, Shell, Statoil, and Total access to some of Russia’s underdeveloped, but prized projects. Western companies have an estimated $35 billion tied up in Russian oil with hundreds of billions more planned and service providers Halliburton and Schlumberger each derive approximately five percent of their global sales from the Russian market.

The Western majors remain committed to their extra-national ventures and these powerful relationships ultimately limit the sanctions’ scope. Still, with their cooperation put on hold, Russia has been forced to look elsewhere, and increasingly within. Rosneft is set to announce new Arctic partners by the end of the year, a role formerly dominated by Exxon. China appears a likely suitor as the two countries have already embarked on a promising oil partnership in Russia’s Far East in addition to the highly publicized long-term gas deals. Domestically, Rosneft and Gazprom have strengthened their alliance and Putin has approved the creation of a state-owned oil services company.

The learning curve will likely be steep, but early successes have bred high hopes and oil production is not projected to contract. Gazprom Neft just completed its third delivery from their Prirazlomnoye project, the world’s first stationary Arctic platform. Shipments from the promising field have now exceeded 1,400,000 barrels on the year. Onshore, homegrown technology and execution has already yielded huge results in East Siberia, which looks to overtake West Siberia as Russia’s primary producing region in the near future.

The picture is incomplete without a discussion of price, and oil’s sinking value – a combination of low demand and increasing supply, US shale included – spells trouble for a number of major players, Russia among them. The breakeven price, or the production cost per barrel, is the central figure here however, and in an international game of ‘how low can you go’, OPEC is in the driver’s seat. 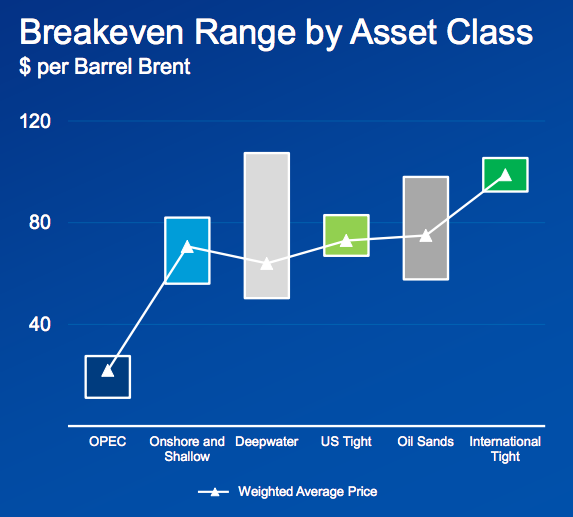 Still, the lower prices – Brent crude has averaged $81 per barrel thus far in November – are in no party’s best interest and OPEC will do their best to keep prices high while defending their market share. The cartel’s upcoming meeting in Vienna on the 27th will go a long way in determining the future trajectory of oil prices. The global supply glut will be the focus, but theories surrounding both US and Saudi collusion and conflict give doubt to any plan for unified production cuts.

Business as usual in Vienna would be a welcome sight for Russia, who would see a decline in the United States’ ability to define geopolitical events in the Eastern Hemisphere. The truth is, the US can’t win any volume or price-based game of brinkmanship with the traditional producing states, Russia included. Shale plays in both Russia and the US will soon be priced out with continued slippage. Unlike the States however, a majority of Russia’s production comes from cheaper, though declining, fields in West Siberia. The International Energy Agency already predicts a 10 percent decline in US shale investment in 2015.

Whether or not that’s enough to stunt global supply remains to be seen. Shaky situations in Iraq and Libya could just as easily remedy pricing woes overnight. What doesn’t kill you doesn’t always make you stronger, but Russia can survive a price war.