Yves here. This post is consistent with concerns we’ve raised earlier, that the appealing-sounding “bail in” scheme is a non-starter on a practical level. US regulators have not chosen to go this route, and this is one of those occasions where their reasons are sound as opposed to bank-serving. However, that is not to minimize the not-trivial problem that American regulators face: their resolution plans aren’t workable either.

By Silvia Merler, an Affiliate Fellow at Bruegel. Originally published at Breugel.

Since the beginning of the crisis – and more so since 2010 – Europeans have been looking at the sovereign-banking “vicious circle”, tying the dismal fates of States and banks together. This has emerged as a characteristic disease during the euro crisis, and one of the stated objective of the European Banking Union project was precisely to remedy it.

The idea was basically to achieve this goal in a twofold way, ex ante and ex post. On one hand, by imposing stronger and harmonised supervisory requirements (e.g. on capital) and by empowering a third-party, independent and hopefully high-quality, supervisor to oversee their fulfillment, thus rebuilding trust in supervision and in the financial sector’s health. On the other hand, if a crisis turned out to be unavoidable, the second principle consisted in limiting recourse to taxpayers’ money as much as possible therefore preventing doubts about the damage that bank rescue would inflict to the state of public finances.

The first principle was translated into practice by the creation of a Single Supervisory Mechanism (SSM) under which, on the 4th of November, the ECB took over supervisory responsibility for banks in the euro area. The second principle concretized by the introduction of the Bank Recovery and Resolution Directive (BRRD) which gives a framework for resolution of troubled banks, and by the creation of a Single Resolution Mechanism (SRM), who should ensure consistent and homogeneous application of it. Among the other provision, the BRRD contains a set of rules for the application of bail-in in bank resolution, strengthening the involvement of private creditor that de facto is already introduced by the amended State Aid framework.

Hence, there has been a remarkable shift in the European mindset about banking crisis, from a first phase in which bail-in was a taboo, to a second one in which it is considered as a new normal and welcome practice. And there is in principle nothing bad about this idea, but the question is whether in rapidly overturning the approach, European policymakers have not overlooked important weaknesses that still exists in the system and could have important consequences in the perspective of applying these new rules.

One such point of weakness could be the fact that banks are actually very substantial creditors to other banks, via cross-holdings of share as well as bank bonds. In its latest Financial Stability and Integration Report (April 2014), the European Commission reported that between 2008 and June 2013, out of the €630 bn of banks’ capital increase in aggregate terms, €400 bn correspond to increases in interbank positions and only €230 bn represent fresh capital injected from outside the banking system. Despite declining since the pre-crisis peaks, interconnectedness across banks remains high, and as of December 2013 “the counterparty for 24 percent of Euro area banking assets (or €7,400 bn) is another Euro area bank”. 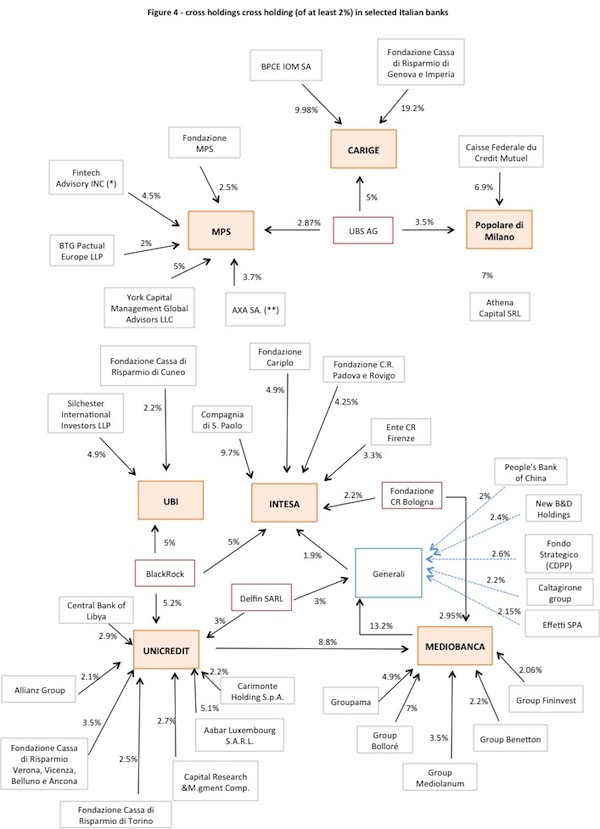 Figure 1 – originally published in this Bruegel post – shows how serious the situation is in the case of Italian banks, who appear to be strongly tied together in a network of cross-holdings. Figure 2 – compiled by the Financial Times back in 2013 – shows that the Spanish system was not immune to the problem either, although less striking. In the case of Italian banks, I pointed out that strong cross holding structure (with political interference) could impede the post-stress test needed reform, but that is not the only problem it raises. As a matter of fact, we could already witness an example of possible implications at the time when the Portuguese Banco Espirito Santo was resolved, last August. The second largest shareholder of BES was in fact another bank, i.e. Credit Agricole, which on the occasion of BES restructuring ended up taking a 708 mn euro hit from its stake in BES, nearly wiping out its second-quarter net profit, which fell 97.5 percent to 17 million euros. 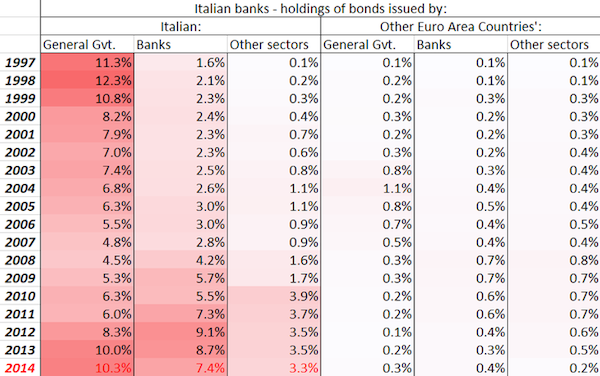 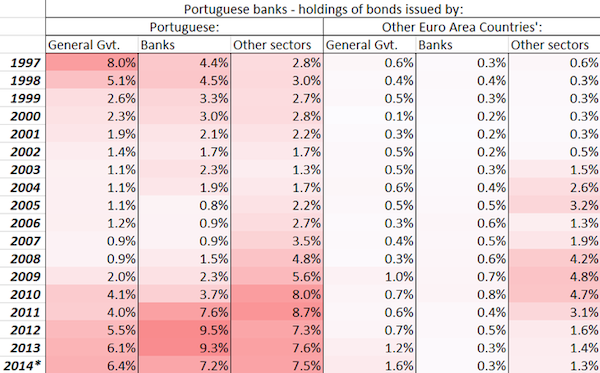 Figure 4 shows that this is not the case for French and German banks, which not only reduced (or at least did not increase significantly) their exposure to the domestic government, but which also decreased their holdings of bonds issued by other domestic banks as percentage of total assets. 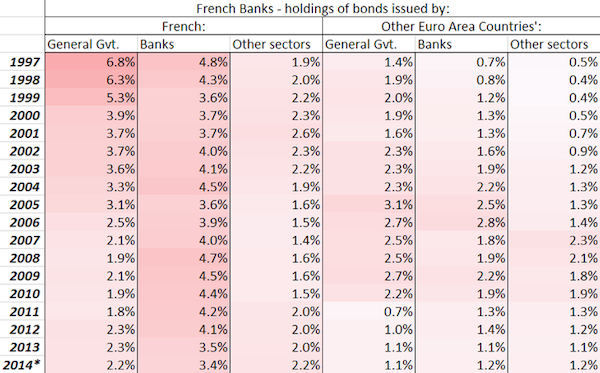 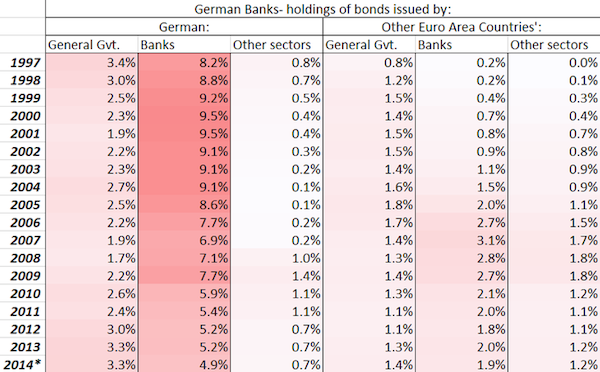 It should therefore be clear that this strong interconnectedness makes the European financial system vulnerable in the context of bank resolution and rises concerns for the application of bail-in, which would become very difficult due to the possible systemic implications. In fact, as in the BES case, the creditors targeted by bail in would include to a large extent other banks, which would as a consequence fall in trouble as well. It follows naturally as a conclusion that one of the first priority for the ECB in its brand new role as supervisor should be to weigh possible measures to mitigate these problems. The ECB in its prudential exercise is including a capital add-on of 1 percent to take into account the systemic relevance of banks. This is in line with CRD IV rules, which include mandatory systemic risk buffer of between 1 and 3.5 percent CET 1 of RWAs for banks that are identified by the relevant authority as globally systemically important and also gives the supervisor an option to set a buffer on ‘other’ systemically important institutions, including domestically important institutions and EU-important institutions.

On top of imposing a capital buffer to limit the effect of interconnectedness once it has built up, one possible way to go would be to act on its underlying drivers to foster more diversification ex ante. There has been a lot of talk over the last years about the need to change the framework for the risk-weighting of government bonds in banks’ assets, in order to better reflect their actual degree of risk (which certainly was way above zero, during the crisis). Reports suggest that stricter rules on banks’ exposure to single counterparties could trigger a sovereign debt portfolio rebalancing in the order of €1tn across the region. The data presented here suggest that weakening the drivers of bank-bank national interconnectedness (e.g. by means of risk weights) and fostering portfolio diversification should also rank high on the priorities, in order to foster financial stability in Europe. Otherwise, we might sooner or later discover that by trying to fix the sovereign-bank vicious cycle we have instead fuelled a bank-bank one, no less dangerous.