Yves here. While this site talks regularly about the 1% and the 0.1%, we don’t often give a more specific idea of who they are. A recent Bill Moyers show gave a vignette of the super-rich, not just the 0.1%, but the 0.01%, who as we know all too well are playing a vastly disproportionate role in reshaping politics and our society.

By Gaius Publius, a professional writer living on the West Coast of the United States and frequent contributor to DownWithTyranny, digby, Truthout, Americablog, and Naked Capitalism. Follow him on Twitter @Gaius_Publius, Tumblr and Facebook.A version of this piece first appeared at digby’s Hullabaloo. GP’s article archive is here

The video is important, not only because it’s well done and very watchable, but because it’s about something almost entirely invisible — the lives of the very very rich — and that invisibility has important political consequences. Most people don’t have any idea what the lives of the very very rich — the “billionaire class” as Bernie Sanders calls them — are actually like. Consider this chart, starting from the bottom: 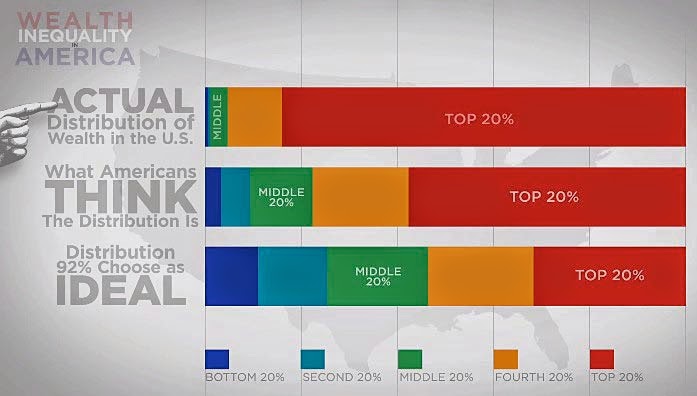 The bottom line shows what people think is the ideal wealth distribution. But since they know the distribution is out of whack, they take their best guess at how out of whack things are, shown in the middle line. No one has a clue, it seems, that the top line is what’s really going on. In other words (rounding slightly):

Now look at the top 1% and you see vast differences in the various strata, the layers. For example, this is from 2011 data (again slightly rounded):

If you just looked at the top 1% as a whole, that huge gap between the 0.01% (the “1% of the 1%”) and everyone else really skews the averages. You have to look at the segments individually to see them properly.

To show that in another way, if there were only 100 total people in the Top 1%, the top one person in that group would take in almost $24 million per year. The next nine would average only $2.8 million. The remaining 90 people would average just $1 million each. That one person is a king.

The Wealth Disparity at the Top Belongs to Just a Few

Why point this out? Because people have no idea what life for the 15,000 is actually like, much less life for someone in the David Koch class. When we think of the wealthy, we imagine MacMansions blown big; we conjure pictures we’ve seen from wealthier neighborhoods, and we just … scale up a bit. We see monster Cadillac SUVs and say, “Ah, the very rich.” People who live like us, but with more stuff.

We know that this can’t be true, quite, but it can’t be off by too much, right? And then we go on with our lives.

One Reason We Don’t Have Revolutions

Our image of the very very rich — MacMansions, only scaled up; nice cars, only pricier; like us, but with more toys — is very very wrong. It’s also one reason we haven’t had a class revolt since the New Deal era. Chris Rock talked about it in the context of Ferguson:

[Q] For all the current conversation about income inequality, class is still sort of the elephant in the room.

[Rock] Oh, people don’t even know. If poor people knew how rich rich people are, there would be riots in the streets. If the average person could see the Virgin Airlines first-class lounge, they’d go, “What? What? This is food, and it’s free, and they … what? Massage? Are you kidding me?”

Except even he doesn’t scale up enough. These people never ride first class because they never fly commercial. He rides first class; they own airplanes. They don’t own homes, they own estates and multi-million-dollar condos in buildings like Moyers discusses — so many estates and condos in fact that not one of them is “home” in the normal sense. Now extend that — for most of these people, not one country is home either.

You and me, we live in a city. People like Chris Rock live in a city and get to travel a lot. Real Money lives in the world, everywhere, all of it. And most are loyal to none of it.

Now the film. It’s about the lives of the very very rich, the places they buy to rarely live in, and how they’re transforming cities like New York. Enjoy.

From the transcript, a tease (italics mine):

BILL MOYERS: A private city in the sky for the rich — the very, very rich. As Goldberger wrote: “if you seek a symbol of income inequality, look no farther than 57th Street.”

PAUL GOLDBERGER: They’re mostly the international super-rich. It’s a whole category of people. Most people are living there part time and have other residences either in this region, or elsewhere in the US or elsewhere in the world, or all of the above. And they’re people who can afford to spend l0, 15, 20, 30 million dollars on an apartment. …

BILL MOYERS: The penthouse apartment is under contract for a reported $90 million. The hedge fund tycoon behind the deal told The New York Times he thought “it would be fun” to own “the Mona Lisa of apartments,” although he has no intention of living there. …

PAUL GOLDBERGER: There’s a prominent real estate appraiser in New York who referred to these buildings as safe deposit boxes in the sky. Places where people put cash and they rarely visit themselves.

BILL MOYERS: So think of them as plush Swiss banks, with maid service, for people who, as one critic wrote, “see the city as their private snow globe.” When this building, 432 Park Avenue, is finished next year, it will surpass even One57, climbing 150 feet taller than the Empire State Building before its spire.

No pharaoh ever dreamed on so grand a scale. Each tower is a feat of technological, economic and political engineering. Promoted to the very rich as the very best.

Note the amazing images; the text can’t do them justice. Note also the hubris, the mark of the billionaire class.

Like fish in water, you live with their greed every day. You watch their propaganda (we call it “entertainment”). You vote for their candidates. Their touch and reach is everywhere, yet they’re invisible to us. The key to their destruction is to expose their lives to view.

I’ve talked about “collapse” — social, political, climatological — most recently on Virtually Speaking. When collapses come, they usually come fast. The last time we came close to collapse was the Great Depression. If we’re poised on the cusp of another, god help us … no one will have fun then, not us, not them. But if things do break apart, it won’t be for lack of patience on our side, but hubris on theirs. They will have forced it themselves … unless they’re stopped.