The New York Times ran a story last week that recapped (and cited) the Sirota’s reporting on a new Garden State impropriety: that of Christie’s wife, Mary Pat, being hired by hedge fund Angelo Gordon after the firm had been told by the state to liquidate a $150 million custom fund. That should be uncontroversial except Angelo Gordon has failed to sell a portion of the fund after three years, meaning it is still generating fees from New Jersey even as Christie’s wife works there. This relationship looks to run afoul of New Jersey’s strict pay-to-play rules, which state officials from “being involved” in “any official manner” in which they have direct or indirect personal or financial interest.

The Newark Star Ledger also wrote up the story, with the addendum that Tom Bruno, chairman of the state’s largest pension fund, called for an ethics investigation.

The day after the Times story appeared in print, the Newark Star Ledger in an editorial tried to depict the accounts as off base. The timing of the response, coming so quickly on the heels of the Times’ account, strongly suggests that it was planted. An all-too-consistent feature of the rebuttals to Sirota’s charges is that they play fast and loose with facts. The bone of contention is that the state is still paying fees to Angelo Gordon, when by all normal standards payments should have ceased years ago.

The details: In 2011, the state investment board ordered the wind-down of a $150 million Angelo Gordon fund in which New Jersey was the sole investor.

The Angelo Gordon fund looks to have been a peak of market investment; the fund was launched in 2006. The New Jersey State Investment Board told Angelo Gordon to liquidate it in October 2011. However, curiously, a supposed $6.7 million of illiquid investments still sits on the books, generating fees a full three years later.

What is troubling about that is the continued insistence that this is an “illiquid” investment, yet it is still being kept on the book in this apparent zombie state. Remember, this is not a private equity investment, this is a hedge fund investment, meaning the assets were securities or perhaps derivatives. If you can’t sell a position like that in three years, there are no buyers at that price, particularly given how ZIRP and QE goosed the value of all sorts of risky assets. The value is clearly well under $6.6 million. So why hasn’t Angelo Gordon recognized the loss by accepting a price where someone will actually take it off their hands? The only alternative explanation is that the investment is worthless. But under either scenario, the idea that there is anything of value left is dubious, which means the continued payment of fees to Angelo Gordon also looks sus.

Yet New Jersey is either clueless or playing along. From the New York Times:

But the state continues to have $6.8 million* in what officials called “illiquid” assets in the fund. State officials said they could not identify the assets, but a spokesman for Mr. Christie said that they “could not be sold without a significant loss to New Jersey taxpayers.” In general, assets are illiquid if they could be sold only at a fire-sale price or if legal agreements preclude terminating the investment before a certain date.

Yves again. That is not a standard definition of “illiquid”. From Investopia:

The state of a security or other asset that cannot easily be sold or exchanged for cash without a substantial loss in value. Illiquid assets also cannot be sold quickly because of a lack of ready and willing investors or speculators to purchase the asset. The lack of ready buyers also leads to larger discrepancies between the asking price (from the seller) and the bidding price (from a buyer) than would be found in an orderly market with daily trading activity.

The issue is that illiquid assets take longer to sell than actively traded ones. But three years is longer than jewelry dealers expect to hold inventory.

So how much are we talking about? Here are the details: 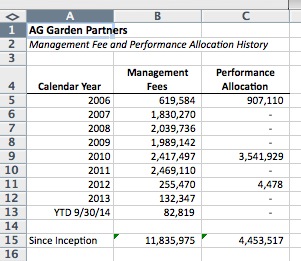 If you look at the profile of management fees, you can see that they fell considerably in 2012 as expected, but were $132,000 last year, which would be 2% of $6.6 million. It also happens that Angelo Gordon hired the governor’s wife in 2012. So whether or not anything actually is amiss, Angelo Gordon getting fees from the state while Mary Pat Christie is on the payroll looks like a big no-no. As the Sirota story pointed out:

“The obvious question here is, why is the Christie administration allowing fees to be paid to a financial firm for three years after the state terminated its investment?” Auerback, who is now an executive at the economic policy group Institute for New Economic Thinking, said. “This seems like a very one-sided deal for the manager. After three years, there doesn’t seem to be a time frame for selling the illiquid parts of the investment, and yet the manager gets to keep collecting fees. It’s a great deal for Mary Pat Christie’s firm, but a terrible deal for taxpayers and for the public employees whose pension money is being used to pay the fees.”

And since the actual deal documents are exempt from disclosure, the question remains as to the state investment board is remiss in rattling Angelo Gordon’s cage out of deference to the Christie tie.

Now what does the Star Ledger try to make of this fact set? What is revealing is the way it tries to finesse the timetable and other key facts. The article concedes that the Governor’s wife was likely hired for her connections as well as her “talent. ” But core to its argument are a couple of howlers.

The first strained argument is that because the State Investment Board ordered the liquidation of the fund, if Christie were behind it, they weren’t doing the fund any favors. But the hiring of Christie’s wife took place after the State Investment Board decision. But that is diversionary. The issue is why Angelo Gordon been allowed to get away with its implausible claim that an investment it says it can’t sell in over 3 years it still being kept on the books as if it were a good asset and fee payments are being made on what looks to be a bogus valuation.

The second strained argument is this one:

….sometimes pension money ends up in places that your political sensibilities find abhorrent – for example, investments in hedge funds that donate heavily to a governor’s political party – but SEC rules or New Jersey’s strict pay-to-play rules allow it.

As we noted at the top of the post, the Angelo Gordon relationship does appear to run afoul of the plain language of the state regulation.

For an in-state paper to act like it does not understand that is telling. And Angelo Gordon could easily clear this up, if it really were all smoke and no fire by voluntarily releasing either the fund agreement or the details of those mystery illiquid assets, so third parties could verify whether they were worth the valuation that Angelo Gordon has assigned them. The continued veil of secrecy gives the strong impression that there indeed is something to hide.

___
*International Business Times reported the position as $6.7 million and the Newark Star Ledger at $6.5 million. The fact that different news outlets are getting different numbers is not exactly encouraging.