Google is a case study of why we need antitrust enforcement. With Google at 97% market share in search [correction: 67%], Yahoo and Bing don’t have enough of a foothold for it to be worth the gamble of trying to beat Google at search, even with Google having degraded its service so badly that there are now obvious ways that a challenger could best them.

I had assumed that the ongoing crapification of Google was for a commercial purpose, namely to optimize the browser for shopping and the hell with everything else. But as we will discuss in more detail below, my experience in poking around to see about buying a new laptop demonstrates that Google has gotten worse at that too. Lambert, who I enlisted to confirm my experience, was appalled and said, “What have they been doing with all that money?” But as we’ll see, there is an evil purpose here, just not the evil purpose we’d first assumed.

It isn’t as if the degradation of Google is a new phenomenon. I used Google heavily while researching ECONNED, which was written on an insanely tight time schedule. It worked really well then. But even a mere year later, by late 2010, the search algo had been restructured in some mysterious way to make the results much less targeted, and it’s been downhill since then. The most recent appalling change came in the last few months: eliminating the ability to do date range searches.

But all of this ruination was so Google could make more money by optimizing for shopping right? Apparently not. I’ve idly and actively looked for stuff on the Internet over the years. A reliable way to do that was to type in a rough or better yet precise description of the product/product name plus the word “price”. That would usually get you a nice list of vendors selling what you wanted so you could comparison shop, and often you’d get links to sites like Nextag which would provide a list of vendors with all-in prices as well as vendro ratings.

Over the last two months, I’ve been looking for an easy-to-install monochrome laser printer (I have NO time to deal with anything more demanding than plug and play, and sadly, dealing with printers on a Mac is not plug and play). I didn’t get any good answers from all my searching and would up buying a used version of my current out-of-production printer. In retrospect, it appears some of my search hassles may have been due to Google, not to having atypical requirements.

To the case study: I am thinking of buying a new Macbook Air and January is when prices are supposed to be the best for computers.* My current one is over four years old and seems to be functioning just fine, but one of my buddies says her employer never would have let me keep a machine that long. And I am only a one-computer household these days, so if my machine died, I’d have to run to the Apple Store and make an emergency purchase (which is one of the advantages of living in Manhattan) But even though I keep a backup on a hard disk on Time Machine, I recently deleted an important file and had to pull a backup off Time Machine. Perhaps I wasn’t doing it right, but the file on the backup disk was months behind the current version, which makes me a bit nervous.**

I want a Macbook Air with a 13 inch screen (I attach an external monitor at home, but on the road, as now, I can get by with just the existing real estate) and 8GB of RAM. All I need is the newest version and the most RAM I can get, since you can’t upgrade the RAM in these solid-state Macs. Note that the 8GB is not the standard configuration, but some stores carry it in stock.

So what happens when I search? Lambert and I used slightly different search strategies, but w got similar results (and yes, I used “8GB” rather than “8 gb”). Here are his results: 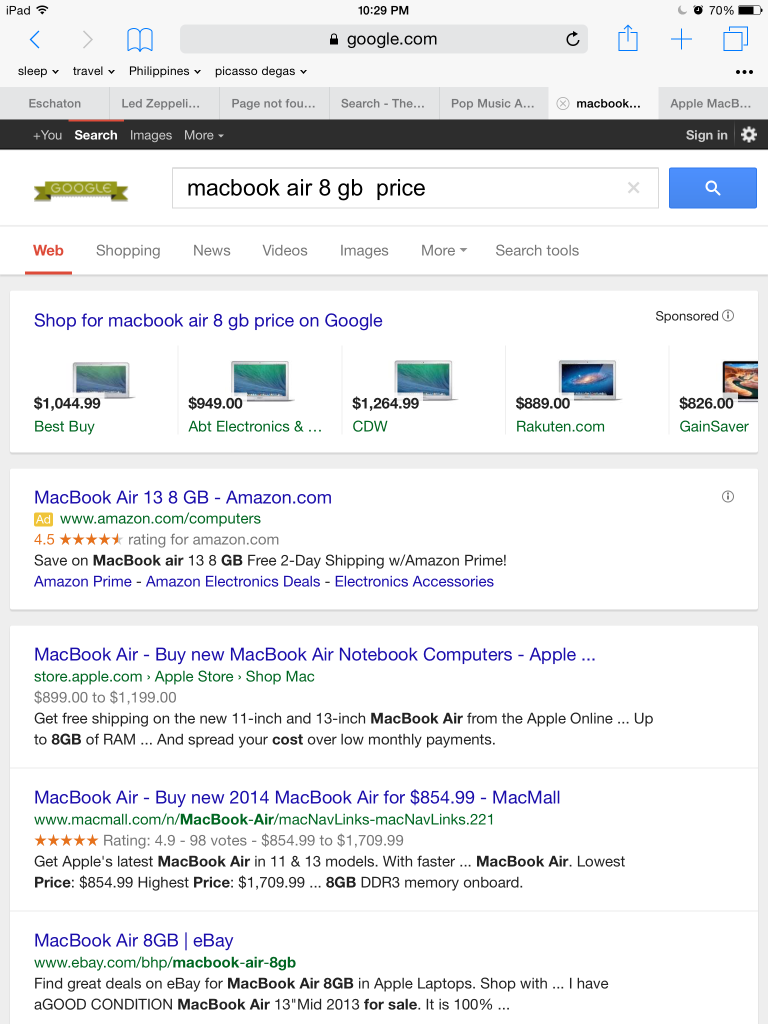 Why is this so terrible? First, none of the five sponsored links takes you to an 8GB Macbook Air. The Amazon link doesn’t either. The Apple one takes you to a landing page for Macbook Airs (the Apple site is an abortion, too much making you read the sales hype and too many clicks to actually make a purchase if you are so inclined). The Macmall link is the only good link on the mess of links. It takes you to a page of MacBook Airs with enough specs listed with each that you can see what one with 8GB of RAM costs. The eBay link was close to useless, in that I’m not interested in a used machine (if I were, I would have gone to eBay directly and yes, the overwhelming majority are used). But even worse, if you click through, it is again not limited to 8GB machines and the results are almost entirely off spec.

But you can see how this defeats comparison shopping, which is one of the alleged big bennies of the Web, if you have to click through a whole bunch of irrelevant links to get to a quote or two. And my version was in some ways worse than Lambert’s. I played with some variants (as in putting terms in quotes, including the screen size). The patterns were that I’d either get a first page with looked like product listings, with at most two of ten links, and none of the sponsored links taking me to what I was looking for. The other results would be heavy on reviews when I was not looking for reviews (and I would not typically get reviews on a “price” search).

So what is going on here? It becomes clearer when you search for something simpler. Apple just launched a swanky new iMac called the Retina iMac for its “retina” screen. Look at these search results: 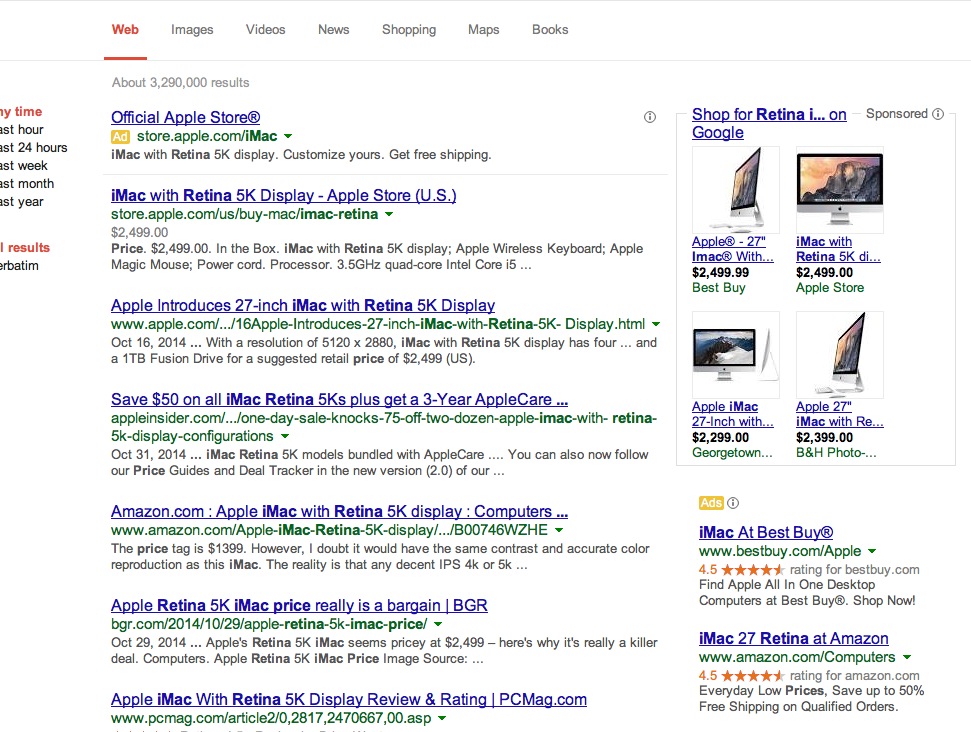 Now we do have Apple as the first Google-like search result and sponsored link as before but in this case, you go straight to a landing page with what you want to see. But the Apple links being better in this case has everything to do with Apple quirks, so we’ll put that aside.

Of the rest of the first page standard search listings, the ONLY other one that takes you to a page where you can buy the product is the Amazon listing, #4 on the page. All the rest are product reviews.

What can we infer? Unless you are Amazon or the manufacturer, if you are a retailer and want to show up on the first page of a Google search, you have to pay for an ad. Otherwise. Google appears to be making sure you won’t get there for free.

Yet Google isn’t making much if any effort to make sure those sponsored ads are all that relevant to you as shopper. Now if it is a unique product, like the Retina iMac, the sponsored ads are more likely to be a match with the search target. But even so, several are links to irrelevant models, such as the BestBuy, WalMart, and Stuccu ads.

So Google is indeed being optimized…..for its own advertising. The message to all but the very biggest vendors is that you must pay to show up. No more getting in the back door by being picked up by an price listing service that gets on Google’s first page, or by matching the search terms well.

But as a user, it looks like Google is cooking its own goose. These crappy results makes me much more inclined to go to Amazon and look at Amazon merchants, and compare price at 3 or 4 Apple vendors I know are reliable with returns in case I get a bum machine. The fact that I’m not getting remotely usable results from Google searches and that means I’ll skip them.

How long will it take for advertisers to realize that they are effectively being scammed by Google, that they are often paying for bad clickthroughs because Google is putting them on search results where they don’t belong but the retailer has written successful clickbait ads so they get bad visits? My impression is that Google Adsense reporting is opaque enough that they might not recognized Google’s culpability (indeed, I can see Google optimizing its algos to keep the bad clickthroughs at the highest level that an advertiser would tolerate).

And in the meantime, all we have as customers to look forward to is the Godzilla versus Mothra battle of Amazon versus Google in shopping search. It’s enough to make one think nostalgically about malls. And I was never a fan of them either.

Update: Some readers say that they can access date range searches through “Search Tools. One provided a link as to how it displays. It sits on the far right of the list of options that starts with “Web Images Videos” etc.

I do not have Search Tools appear, as you can see below. So my statement is accurate. I cannot access date range searches:

_____
* Just so you know, I hate buying new computers. I hate all the time the setup takes, I hate that some things never work the same, I hate having to find and download drivers. My pattern is to use machines until they die or become so hopelessly memory constrained that I am forced to abandon them. I used my NeXT for 10 and a half years and my TiBook for over eight. The idea of giving up a working machine after four years and a few months offends the Yankee in me, aside from the large tax on my time of getting a new machine broken in.
** Time Machine does dutifully chug with great frequency and slows down my machine in the process, so it appears to be doing something. I’m just not convinced that it is the right something.