Yves here. Lambert has a post on his latest visit to Walmart (rest assured Lambert goes to Walmart only when he has no other option). I liked the piece but he thought it had not quite jelled.

It’s yet another take on the degradation that Walmart inflicts on its associates and shoppers. The core observation:

Walmart is ugly, and makes the “consumers” who shop there look ugly, because that is what it is designed to do, as we see from the signage. It’s as if the Harkonnens had designed the quintessential American retail experience:

How typical of a Harkonnen fief, the Duke thought. Every degradation of the spirit that can be conceived. He took a deep breath, feeling rage tighten his stomach

Is it necessary to signal to customers that they are clearly getting a bargain because the Walmart is so cheap that it buys (presumably) off color, icky paint so they can pass the savings off to customers? That’s a branding issue rather than a cost issue, since Walmart buys in such ginormous volumes and bargains so hard that they’d get the finest prices on whatever they purchased, including paint.

Remember, low cost does not have to be ugly. Indeed, quite a few designers have made it a point of pride to create attractive objects and spaces for low-income groups. For instance, artist and social reformer John Ruskin helped fund an early series of low-income housing projects conceptualized and operated by Octavia Hill. Hill insisted that her tenants all have access to open spaces. She recognized that as important to their well being. She also successfully campaigned to keep London’s Hampstead Heath and Parliament Hill Fields from being converted from parks into suburban developments. Frank Lloyd Wright also designed inexpensive housing for workers (sadly never built because International Harvester instead chose temporary housing). More recently, Target has gone for featuring low-cost but attractive designs, to the extent that some are featured in high end magazines as stylish bargains. I’m sure reader can provide numerous other examples.

In fact, the poor can’t afford to be cheap. The move by big corporations towards more and more planned obsolescence, often via products designed not to last, is costly churn for middle class and richer consumers, but even more of a toll on lower-income buyers. Moreover, poor people will sacrifice to buy more attractive goods:

VisionSpring sells low-cost reading glasses to the working poor in India at prices ranging from $2 to $4. They enable a tailor, a weaver, or a jeweler to continue working after the age of 40. Although customers may save for a month or two before they are able to purchase the glasses, only 5% choose the “Ushas,” the least expensive and least attractive option. As Jordan Kassalow, founder and CEO of VisionSpring says, “Vanity isn’t monopolized by the rich.”

I’m a bit bothered by the judgmental comment by the CEO. Who doesn’t want to like what they see in the mirror? Moreover, these workers might correctly judge that higher-cohort status markers will help them in the workplace. There is a vast literature that shows that people judge the attractive more favorably.

So Lambert may not have quite nailed this post because it is a topic that is inherently tough to pin down. And Calvinist America, we are particularly mean-spirited toward the poor. We seem to lack the British concept of “cheap and cheerful,” that you can have a market niche of lower-priced goods and services that are still a pleasure to consume.

Sadly I had to take the bus to Walmart (four hours round trip on public transportation). The service was horrible, and I had to go back a second time (total, eight hours) but there was no point losing my temper because clearly all the employees, er, associates, as well as their managers, were in the grip of a system that was being run more cheaply than possible. (I waited outside for the bus home next to some storage containers they had parked outside the building, gawd knows why, and heard a big electrical crackle come from one of them just before the bus arrived. Yikes.)

While I was there I took this picture, because it seemed to sum up a lot of my difficulties with the place: 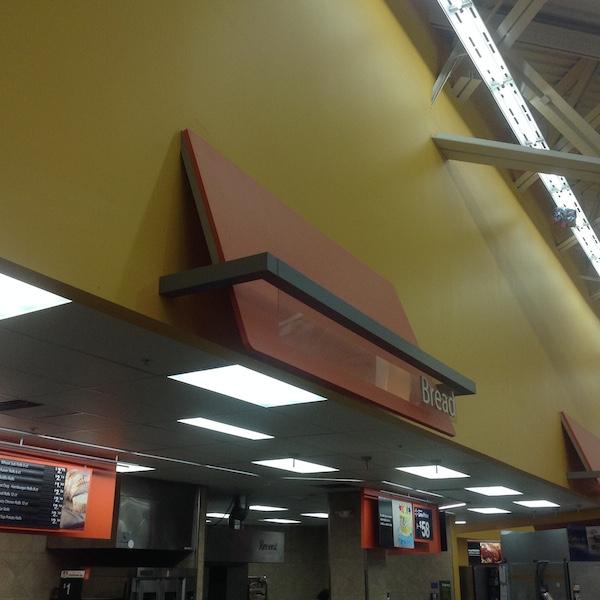 This is, I believe, a “simpler than possible” awning. Rather it’s a notional awning, the dead idea of an awning. It’s above an area that serves bread, as you see, so I imagine it’s meant to convey the feel of a cheery patisserie. I’m not sure which is worse: The attempt to convey the feel, or success (if any) in the conveyance, because that would have meant such a horridly low baseline for inducing the feel. I hate everything about that awning and no, I don’t just strongly dislike it:

1) The colors are depressing and horrible. There don’t seem to be any primary colors in Walmart’s trade dress at all; I would call these dirty pastels, but I’m not enough of a colorist to know. The mentality is that of the client who thinks magenta (process red) is a substitute for red, and makes the switch, because it’s cheaper, and anyhow, who would notice? The fluorescent light and the camera are making the colors appear worse than they are, but not a lot worse, believe it.

2) The materials are cheap and too smooth. Particle board, plastic, stamped metal, plexiglass. And somebody’s got to clean that plexiglass.

3) The dead idea of an awning is rigid and immovable. Real awnings are mostly fabric, and movable. Even New York street awnings have shape!

4) Look at that nail or screw or whatever it is at top left and right. It looks like they’ve attached the fake awning to the frame with two screws at the top, and no screws at the bottom. Is the awning glued to the frame? Is it just held in place by gravity?

5) The word “Bread,” with its grey color and bland typeface, is just so discouraging. You could put any word up there in grey on the plexiglass and it would come out denatured. “Sex.” “Love.” “Hate.” And so forth. The signage should be in Cyrillic from the former Soviet Union. (The word “Revent” in script on the hood in the back is, therefore, quite subversive. But nobody noticed.)

6) At top left, where the notional awning meets the notional wall, there’s a visible gap. Shoddy workmanship, like shoddy design, and shoddy materials.

* * *
The architect Christopher Alexander has a wonderful, though eccentric, book called The Nature of Order: An Essay on the Art of Building and the Nature of the Universe. In it, he pairs images, and asks which image is more alive (and less dead) than the other.[1] So here’s one such pairing. Which awning on which bread store is more alive?
* * *
Walmart’s trade dress also reminds me of John Berger’s famous essay, “The Suit and the Photograph,”[2] based on this image from the German photographer August Sander’s Man of the Twentieth Century (1929 (!)), a typological catalogue of more than six hundred photographs of the German people. This is Peasants going to a dance, Westerwald, 1914 (!!): 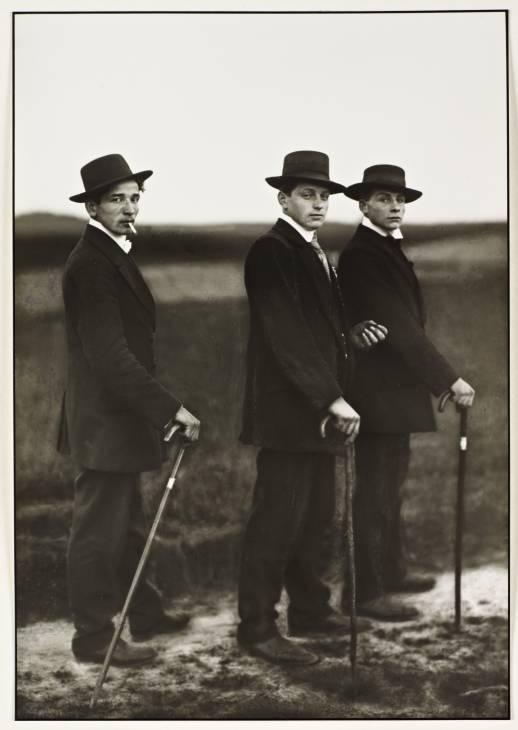 Now make an experiment. Block out the faces … with a piece of paper, and consider only their clothed bodies.

By no stretch of the imagination can you believe that these bodies belong to the middle or ruling class. They might belong to workers, rather than peasants; but otherwise there is no doubt. Nor is the clue their hands — as it would be if you could touch them. Then why is their class so apparent?

Is it a question of fashion and the quality of the cloth in their suits? In real life such details would be telling. In a small black and white photograph they are not very evident. Yet the static photograph shows, perhaps more vividly than in life, the fundamental reason why the suits, far from disguising the social class of those who wore them, underlined and emphasized it.

Their suits deform them. Wearing them, they look though they were physically mis-shapen. … None of their abnormalities is extreme. They do not provoke pity. They are just sufficient to undermine physical dignity. We look at bodies which appear coarse, clumsym brute-like. And incorrigibly so.

Walmart is ugly, and makes the “consumers” who shop there look ugly, because that is what it is designed to do, as we see from the signage. It’s as if the Harkonnens had designed the quintessential American retail experience:

How typical of a Harkonnen fief, the Duke thought. Every degradation of the spirit that can be conceived. He took a deep breath, feeling rage tighten his stomach

Of course, I’m putting myself in the mind of a Duke in that quote; my own class bias, and the good luck to have read the book, many times, and to have the art of retaining quotations. My parents would never have dressed like that; they were professors! And as for me, I can still pass….

Working people should have excellent clothes and beautiful places to shop. Why the fuck don’t they?

NOTE [1] Maybe not such a crazy idea after all, that things like salt shakers can be more or less alive.

NOTE [2] I had the same sensation returning to the States last year and seeing anew how people dress.