Mr. Market is having a major sad today largely as a result of disappointing retail sales figures for December, a 0.9% fall, well below the median forecast of analysts suveyed by Bloomberg of a fall of 0.1% and lower than the most bearish forecast of 0.5%. Maybe I should just pay attention to NC reader and shopping maven Li, who told me repeatedly that the retail environment was in poor shape based on the fact that major retail stores were putting through December markdowns vastly ahead of their usual schedule.

We’ve ben skeptical of the theory that lower oil prices would be a boon for the economy. The argument has been that consumers would spend their savings elsewhere. As Ilargi has pointed out, all that does in shift consumption from one category to another. It does not lead to a net increase in spending.

Now admittedly, one month does not make for a trend, so we’ll have to see more data to determine if this pattern holds. However, gas prices were already appreciably lower in December and consumers were not spending those savings at the pump. From Bloomberg:

The figures used to calculate gross domestic product, which exclude categories such as food services, auto dealers, home-improvement stores and service stations, decreased 0.4 percent, the worst performance since snow covered much of the country in January 2014, after rising 0.6 percent in November.

Sales at retailers and restaurants decreased a seasonally adjusted 0.9% in December from a month earlier, the Commerce Department said Wednesday. That was the largest monthly decline since January 2014. Excluding gasoline sales, purchases fell 0.4%, while spending declined 1% when removing the volatile autos category.

The numbers are at odds with what most retailers say was a relatively strong holiday season and underscore the volatility of consumers, who may have more money in their pockets thanks to lower energy prices but aren’t necessarily spending it.

The results “were weak even after accounting for the huge plunge in gasoline prices,” PNC Financial Services Chief Economist Stuart Hoffman said. Excluding gasoline, the consumer-spending trend is “increasing, but growth does not look as strong as it did in November.” 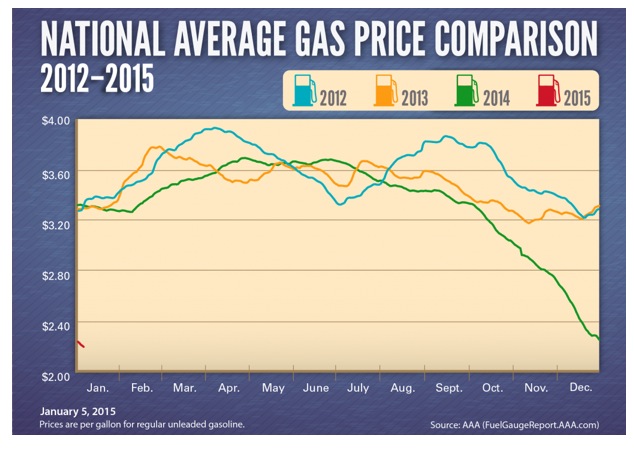 Now even if consumers do start spending more on other categories as they become acclimated to the new normal of cheaper gas prices, not only is it unlikely that we will see net gains on the retail sales side of the economy, but the losses on the wage side appear to be underestimated. It isn’t simply that the states that showed big job creation gains were all the energy producing states. It’s also that the jobs in the energy industry are moderate to high skill, highly paid work. And the knock-on of increased construction work is also well paid. The likely slowing/stoppage of hiring net in the energy sector as a result of the oil price plunge, combined with the addition of mainly McJobs elsewhere, may be the big culprit in the mystery of the last jobs report: increased hiring but lower average wages.

Moreover, there’s a bigger backdrop that no one seems to be factoring in: that the press is full of stories of pensions being slashed. If citizens have to be able to carry themselves through retirement with less in the way of employer and government support, then they need to be saving much more, now. Part of the “new normal” is working age people adjusting themselves to the fully rational expectation that investment returns will continue to be weak and that social safety nets will only become more tattered. So the idea that near record low household debt service costs bodes well for economic growth (ie, they have more room to spend and even lever up more) ignores how much the economy has changed, in terms of job stability and quality and retirement prospects. That means much greater pressures to save.