Yves here. This post will not doubt give readers some grist to chew on in the ongoing debate as to whether the Fed is a very very clever bank stooge or not all that smart (and therefore a bumbling bank stooge, by virtue of cognitive capture). This discussion of the Fed’s blindness on disinflation, when commodities prices have fallen, oil is continuing its downward slide, and Europe has tipped into deflation, strongly suggests that the Fed is so desperately in need of believing in its own virtue that it will ignore any contrary evidence. That refusal to look at reality and to learn, particularly after how the central bank’s past ideologically-driven policies helped drive the global economy into the ditch, is a form of stupidity that seems to be drummed into orthodox economists.

By Chris Becker, a proprietary trader and investment strategist. Originally published at MacroDigest

The US Federal Reserve released its minutes from the December FOMC meeting just a few hours ago AEDST time (available here). The reaction on the markets has been mixed, whereas the pundits are chewing at the bit for signs of where the Fed shall strike next, with any rate rises put off until at least April.

Adam Button at ForexLive has the sceptical take on inflation: 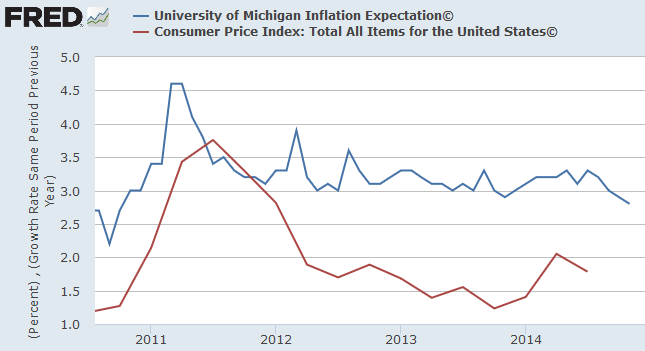 The FOMC minutes show a total disregard for the signals markets are sending about disinflation. Five year breakeven rates are plunging, implying that 1.09% average inflation over that period.

The Fed discussed this problem of signaling rate hikes while the market signals disinflation in the Dec 16-17 FOMC minutes and had this to say.

Instead of listening to the market. The Fed decided to listen to its models — the same kinds of models that assumed house price declines wouldn’t happen or be limited. On top of that, Yellen specifically mentioned the University of Michigan survey on inflation expectations, which has overestimated inflation by 200 basis points for the past three years.

This hearing disorder probably has grown out of an optimism condition, with most members dismissing any external risks, e.g deflation in Europe or fallout from the oil price collapse, with most betting on the ECB and others “doing something”, although some saw downside risks if “foreign policy responses were insufficient”.

The question of rate rises by the Fed is being pushed out further and further, with the key point raised but not yet widely analysed is the lack of any acceleration in wages, although the huge relief from oil halving is sure to have an impact on disposable income. Wages have finally recovered from the GFC low:

Whether this filters through to inflation is hard to gauge, which is stubbornly staying at or below 2% with core inflation slipping.

I would suggest unless this changes – and forward looking breakevens and the yield curve indicate no such change for a long time – rate rises will be off the table for a long, long time.