Yves here. Please read past the finger-wagging “private lenders are (barely) starting to come back to Greece, better not spook them” talk. This piece provides a useful overview of how the composition of lenders to Greece has changed over time. You can see how significant banks once were and how they were quiet deliberately displaced by various “official” creditors.

By Silvia Merler, an Affiliate Fellow at Bruegel and previously, an Economic Analyst in the DG Economic and Financial Affairs of the European Commission (ECFIN). Originally published at Bruegel

Since the start of the crisis, the structure of Greek debt has changed considerably (almost 80 percent of government financial liabilities are now accounted for by loans, against slightly less than 20 percent back in 2008). At the same time, the weight of public creditors has increased among the creditors of the government. Figure 1 shows a breakdown of the Greek general government financial liabilities across the main creditor sectors (with public creditor included in non-residents). At the end of 2013, debt due to official creditors amounted to 216 billion of loans (IMF/EU loans) and 38 billion of securities (under SMP). This means that, at the end of 2013, official creditors accounted for about 94 percent of the total loans due to non-residents and 89 percent of the total securities held by non residents.

But the government is not the only Greek sector to which foreign investors are exposed, and official creditors are not the only investors in Greece. After Greece came under market pressure and eventually obtained an EU/IMF macroeconomic financial assistance programme in 2010, foreign banks started to rapidly reduce their exposure to Greece (figure 2). Euro area banks’ consolidated foreign claims on Greece – which peaked at about 128 billion euro in 2008 – reached a low of about 12 billion euro in September 2013. UK banks’ exposure reached a peak of 13 billion in March 2008 and dropped to 4.3 billion in December 2012. US banks’ exposure instead was about 14 billion in September 2009 and down to 2.5 billion at the end of 2012. 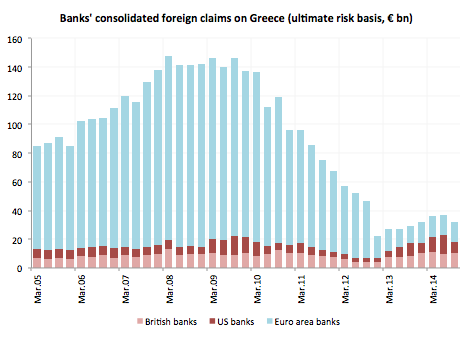 Interestingly, US and UK banks have been increasing their Greek exposure again, since March 2013, reaching back to levels not very far from those of end 2009 /early 2010. US banks’ exposure to Greece as of September 2014 was in fact 8 billion (down from 13 billion in June) and UK banks’ exposure was 10 billion. Euro area banks have behaved very differently and total exposure to Greece has in fact continued to decline in almost all countries. Even more interestingly, the only country where banks have been continuously increasing their exposure to Greece since 2013, is Germany. German banks’ foreign claims on Greece in fact reached 32 billion in March 2010, dropped to as low as 3.9 billion at the end of 2012 and were back to around 10 billion in June 2014. Therefore the recent increase is small compared to the historical level, but it has been continuous (at least until September 2014). 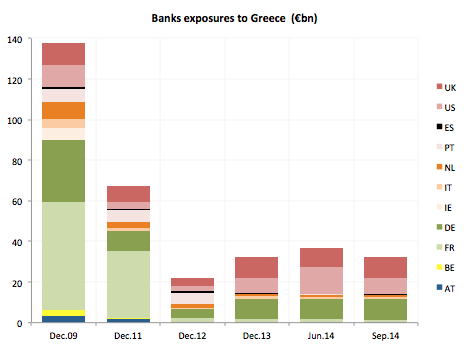 The composition of such exposures, however, varies across countries and has significantly changed over time. Figure 3 compares the exposure of selected foreign banks to Greek sector as of september 2014 versus December 2012 (chosen as a starting point because so that comparison is made between two post-PSI dates).

In 2012, exposures to the Greek private non-financial sectors accounted for the largest share of banks’ exposure to the country, with the exception of Belgian banks. In 2014, exposures to Greek banks have significantly increased as a share of total exposures in all countries but for Belgium and Spain. In terms of absolute numbers, only Belgium and Germany have increased their exposure to the Greek private non-financial sector. In absolute numbers, also exposure to the public sector has increased everywhere (apart from Belgium), but the only country where public exposure has significantly increased as a share of the total is Italy.

Exposure of banks in different countries to Greek sectors (€ million)

Anybody who has followed the development of the euro crisis know about the important increase in the weight of public creditor for Greek government debt. This data show, however, that since 2012 (when the ECB introduced the OMT programme) private investors have been timidly and slowly coming back also to Greece. While exposures of euro area banks are still at very low levels compared to the pre-crisis period, it is tempting to interpret this as a first trace of normalisation and resume in confidence, which the present political turmoil risks to revert.