By Richard Smith, who has been getting dusty in the archives.

Our New Zealand Financial Services Provider is Asia Finance Corporation, trading on GXG Markets, until a couple of weeks ago, as London Capital (NZ). Here is a May 2012 news release from yet another of London Capital’s cockeyed offerings, Creek Project Investments:

The Directors of Creek Project Investments Plc (Creek ) are pleased to announce that GXG Markets has agreed that Creek’s free-float of 1.7 million ordinary shares shall be used for the purpose of establishing the market capitalisation of Creek. The balance of Creek’s issued ordinary shares (58,300,002) are presently the subject of legally binding lock-in agreements and held by London Capital NZ Limited as custodian have been issued with ISIN GB00B87MY39 until the expiry of the lock-in agreements on 17 November 2013. The Directors of Creek accept responsibility of this announcement.

In other words, London Capital entities and people

We can make a cynical guess about what will happen next.

We are right: after more than a year’s worth of diligent trade reporting (here, trades tab), the market capitalisation of Creek Project Investments eventually climbed, after the lock-in mentioned in the press release had expired (earlier than advertised, on 4th March 2013), to £60,000,000.

Creek had been monumentally pumped. That market capitalization is pathologically bloated.

The bloat is even worse in hindsight. It emerges, more than a year later, that even the £6,000,000 of assets underpinning that valuation are a mirage. For Creek’s assets turn out to be shares in another London Capital vehicle, Sejong Investments, which had become completely worthless by December 2012, well before Creek’s price peaked.

But that revelation lies in the future. In March 2012, the next stages should be: publicize the stock, and then dump it. For a moment, it looks as if that exactly what’s about to happen. Here’s something from China Buzz, blog of The Economic Observer, on March 2nd, just before the lock-in expires:

The world’s biggest goose farm and foie gras factory will soon be established on the banks of Poyang Lake, in China’s Jiangxi Province. The American [sic] investment company Creek Project is said to be investing $100 million into the venture.

But, uh-oh, this publicity is not part of the London Capital plan:

This news released last week did not come from the company, but by way of the Darwin Natural Knowledge Society, a Beijing-based NGO focused on environmental protection.

In fact, it’s all going horribly wrong for London Capital: they are not in control of the news flow at all. By mid-March 2012, animal rights activists (archive) had got hold of the Creek story:

According to information posted on the official website of Creek Project Investments, the British corporation investing in the farm’s construction, 3 million geese had been delivered to the farm by the end of 2011 in preparation for its opening.

Had the animal rights activists been able, and inclined, to look at the yet-to-be issued May accounts, they’d have discovered that those 3,000,000 geese are on the balance sheet at a value of zero. They might then have concluded (correctly) that the geese are phantoms, a figment of Creek Project Investments’ promoters’ imagination. But animal rights activists are not necessarily sceptical enquirers, and stock pump and dumps are not a core part of their domain expertise, and anyway, the accounts weren’t published for months yet.

Instead, the activists, who assume that Creek Project Investments are cruel, yet honest, start a fracas on behalf of the completely nonexistent geese:

We have received an ACTION ALERT from Chinese friends.

Please read and support. Thanks you.

Please help us stop the world’s largest foie gras farming and manufacturing industry established in our famous Bird’s wet-field lake “Pan Yang Lake” in Jiangxi Province in China by contacting your local government in the United Kingdom to protest. It is imperative that we stop this cruel act from happening more and we urge you to take action against the foie gras industry.

According to information posted on the official website of Creek Project Investments, the British corporation investing in the farm’s construction, 3 million geese had been delivered to the farm by the end of 2011 in preparation for its opening.

“It will be totally different from the existing small foie gras farms in China, as potential annual production could reach 1,000 tons,” he said. 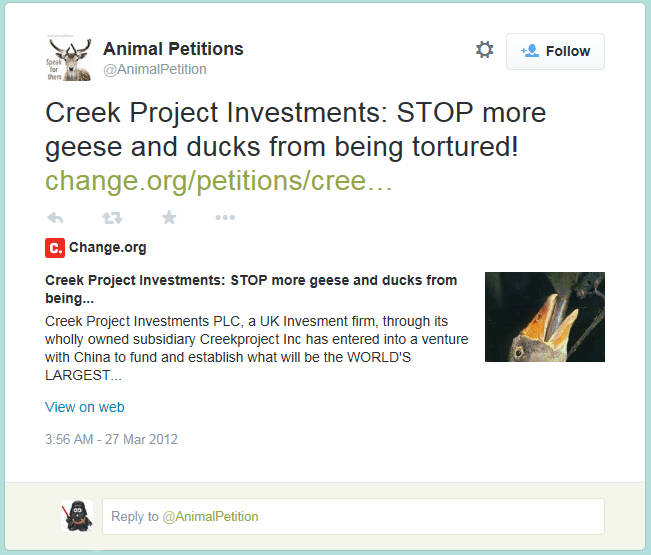 That’s too much of the wrong kind of publicity: Creek Project Investments announces the suspension of its foie gras project on 3 April 2012 and Care For Chinese Animals declares victory:

After national and international protests, the Directors of Creek Project Investments have announced a suspension of the development of their intended biggest Foie Gras plant in Mainland China, until the completion of a full review with input from animal welfare and environmental experts to address any issues.

At this point, the burgeoning foie gras story, based initially on that ghost army of Chinese geese, reaches the UK national papers, who take it off in all sorts of crazy new directions. Here’s the Telegraph, in a piece entitled “Is there too much fuss about foie gras”, dragging in Domestic Goddess Nigella Lawson, and Selfridges:

‘Need to make it completely clear story about my buying foie gras total fabrication i.e. a lie,” tweeted Nigella Lawson yesterday. Such was the Domestic Goddess’s indignant reaction to press reports that she bought under-the-counter foie gras from butcher Jack O’Shea’s concession at Selfridges in London. He had been selling the delicacy illicitly, breaking company rules based on animal welfare grounds, and has since been dismissed by the store.

Lawson is clearly at pains to point out that she did not buy the controversial product in this instance (her lawyers have been in contact with the newspaper concerned). But, tellingly, her tweet did not express any views on the issues surrounding foie gras. She is not calling for a boycott; why would she? It is on the menu in many respected restaurants with exemplary sourcing policies, including one of her favourites, The Ivy. The fact is that few people relish being dragged into such a debate for fear of being the target of angry animal rights campaigners.

By contrast The Guardian, 11 May 2012, flays, more or less at random, those sadistic atavistic gourmets, the French, but sticks mostly to the subject of Creek Project Investments. Adventurously, The Guardian describes Creek, a UK-registered company with no UK operations, an imaginary farm in China, and controlled entirely by offshore directors and overseas interests, as ‘Cambridge-based’.

Then the media pause for thought for the summer break.

Creek Project Investments, who can’t be enjoying their public profile, definitively abandon their nonexistent foie gras project in June. I suppose that since Care For Chinese Animals have already declared victory in April, there’s not much extra PR mileage in declaring victory again in June. So Creek Projects’ final rout goes uncelebrated, for a while.

It all kicks off again in September, when Sir Roger Moore (the legendarily inexpressive film actor who portrayed James Bond in the 70s) suddenly takes a pop at unsuspecting London luxury food retailer Fortnum & Mason:

Like many people, I believe the sale of this “torture in a tin” should be illegal here, too. If a product causes so much suffering that it is illegal to produce in the UK, then it should most definitely not be sold in any respectable British institution – let alone a shop such as Fortnum & Mason, which so blatantly trades on its English heritage.

Until that day, which I pray is not far off, I hope you will join me in taking action with your wallets and purses by boycotting any establishments which continue to sell this shameful product of goose torture.

That’s in the Telegraph, whose editors have by now decided that there’s nothing like enough fuss about foie gras any more, a reversal of their April line. Perhaps, for the Daily Telegraph,  it just depends who’s making the fuss: crazed foaming pinko fanatic activists, or impassive lustrous Tories like Sir Roger.

Next it’s time (October 2012) for the pinko fanatic animal rights activists to mess with the Telegraph’s editors’ heads, by revealing that our smooth film star, Sir Roger, was their ally all along. That disclosure gives the activists a pretext to recycle the June news that everyone’s long forgotten:

London—Humane Society International, along with animal protection groups in the United Kingdom and China, and global film star Sir Roger Moore, have succeeded in stopping the construction of a massive foie gras production facility in China’s Jiangxi Province. The project was to be financed by UK—registered company Creek Projects Investments Ltd. China’s Central People’s Broadcasting Station, quoting a local government official, confirmed an end to the planned facility.

The proposed foie gras production facility, set to receive a 100 million yuan investment by Creek Projects, would have been one of the largest in the world, designed to produce 1,000 tonnes of foie gras by slaughtering 8 million ducks and 2 million geese each year. Foie gras typically involves force-feeding ducks and geese by placing a long pipe down their throat and pumping large quantities of food directly into their stomachs, several times a day, until their livers become diseased and enlarged up to 10 times their normal size. Foie gras — meaning ‘large liver’ — is considered a delicacy by some.

In June, HSI and Compassion led a petition letter to the provincial leaders of Jianxi Province in China, co-signed by Animals Asia Foundation, the International Fund for Animal Welfare, the RSPCA, the Hong Kong SPCA and others. Sir Roger Moore also gave his support to the campaign, saying he was “utterly appalled” that a British company was funding animal cruelty in China. “Foie gras is sold as a luxury product but there is nothing luxurious about animal cruelty,” said the James Bond actor.

The magic words “Sir Roger Moore” give the Creek Project story a whole new lease of life, in the Standard , the Daily Mail, and the Irish Independent, coverage that duly triggers some more effusions from the much picked-upon Fortnum and Mason, in the Daily Mail and the Daily Telegraph.

Then, mercifully, the hubbub subsides.

So there you are: just combine, vary and recycle a row about: 3,000,000 Chinese geese (that never existed); a chunky Kitchen Goddess; the appalling French; some big-name London shops; and an old film star. That is what makes the national news, in the modern UK.

I suppose the dash of Twitter might be something new; otherwise it’s all comforting, tired, uninquisitive stuff, some of which (macabre French eating habits are a perennial English theme) could have been written in the 18th century. Right at the origin, there’s a brazen stock fraud that no-one’s noticed. The whole story is achingly English.

Meanwhile, after all that careful stock price manipulation, Creek Project Investments must be shaking their heads. My tip: it’s probably better just to stick to fake gold mines in countries far away, boys, and leave geese alone. They’re just too controversial, and much better protected than gold mine investors.

Creek evidently agree. Their web site was still live, just now, and I downloaded their latest post-foie-gras-fiasco forward-looking statement,  which includes, amongst many other improbabilities, the following claim:

The company is continuing to develop current Gold mining MOU interests including exploration in:

That’s more like it, but it’s too late, I fear: there is just too much public attention on Creek’s foie gras fantasy.

Creek Project Investments produced their final accounts in 2013 and crept off GXG very tidily via a requested GXG delisting in 2014; and that was that: good riddance.

As of 25th February 2015, Asia Finance Corporation, London Capital (NZ)’s alias on the New Zealand register, is still a registered Financial Services Provider. One can only raise an eyebrow, or roll one’s eyes. Just like Sir Roger, come to think of it: 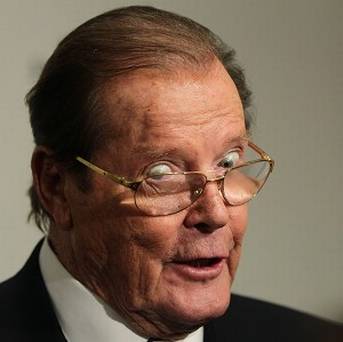