Some brief updates, with more on Monday:

Quite a few pundits appear to be in denial about the aggressiveness of the ECB move towards Greece and what that signifies about the prospects for reaching a deal. The Syriza government insists it is not backing off from the major tenets of its yet-to-be-fully fleshed out proposal. In an interesting shift, some economists, including Frances Coppola in a Financial Times column and the Economist’s Free Exchange blog, risk-sharing ideas that Draghi himself has put forward. However, they miss that the body language of the ECB, having moved to make Greece’s negotiating timeframe as short as possible, is clearly signaling that it is trying to bring Greece to heel and force a deal within the current parameters. That makes it very difficult for new structures to be included in the negotiations.

The strongest implicit message from the ECB was its rejection of deviations from the current deal, such as Greece’s rejection of Troika monitors (the comment in the ECB press release about how “it is currently not possible to assume a successful conclusion of the programme review.”). And even the media stories that took a more conciliatory tone towards the idea of negotiating financial terms took a very stern tone about the importance of structural reforms, as in driving wage rates down, along with the reasons to doubt Syriza’s promise that it can crack down on oligarchs and improve tax collection. The issue of “structural reforms” is a major outtrade, since Syriza is committed to higher, not lower wages, and having the government engage in direct hiring to reduce unemployment levels. So the message remains loud and clear: despite lip service to the idea of favoring growth over austerity, the most that Syriza might get is austerity lite.

The Greece population is showing strong support of Syriza. Since when have you ever heard of pro-government rallies? Hat tip Δημήτρης: 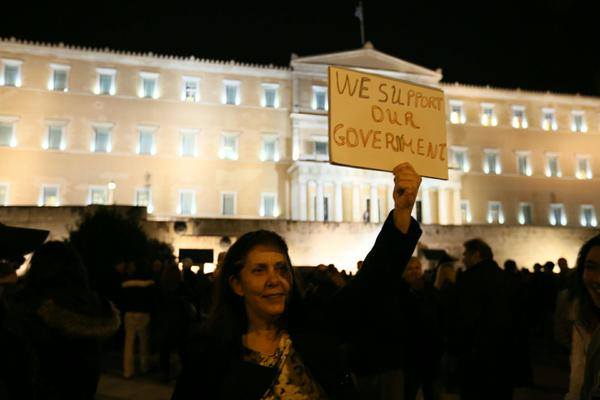 And the rally in Athens does not appear to be based on a fuzzy-headed notion that Syriza has good odds of prevailing against the Troika. As the BBC’s Paul Mason wrote late Wednesday evening:

My social media feeds, and those of people I follow, are now reflecting Greek sentiment changing towards euro exit. The total lack of transparency (who voted? why?) and the right time melodrama from a central bank have made people wake up uncertain about what their central bank is trying to do.

There is a deluded view among some financial analysts that the Greek government is in the process of doing a giant u-turn, and will end up obeying Brussels and Frankfurt to the letter, as its predecessor did.

As I have repeatedly blogged, on the basis of well authoritative briefings, the Greek radical left party Syriza does not want to be in power unless it can make significant reforms to the welfare, pension and privatisation programme imposed by 2012.

As everybody stares over the abyss it’s worth spelling out what that is: not immediate euro exit. If the ECB triggers a bank run in Greece, the government would likely resort to capital controls and seek bilateral funding outside the euro system. The Greek constitution also allows it simply to hand power back to the shattered, pro-Brussels centrist parties and let them self-destruct some more.

Mason points out that despite the ECB intent to bring matters to a head quickly and force a Syriza capitulation, that is simply not in the cards. That is consistent with Varoufakis’ short e-mail to us last night. There is also the interesting question of how brutal the Troika might become if Syriza manages to loosen the ECB’s choke chain and stymies it for longer than the Eurocrats thought possible. Frances Coppola, based on her reading Varoufakis’ tweets, is of the view that the ECB would not push Greece over the brink by revoking the Greek central bank’s access to the Emergency Lending Assistance program, or ELA. But it did do that, both to Cyprus and Ireland. The ECB’s actions so far have been remarkably bloody-minded, shocking quite a few seasoned Eurozone mavens. I’m not sure anything can now be ruled out. With the public showing strong support of the government, the odds of a Grexit, something that I had discounted as possible but not terribly likely, now is higher odds. While a compromise on the financial terms might still be achievable, Syriza and its financial lords and masters are 180 degrees apart over the need to end the humanitarian crisis in Greece.

The comments of Eurozone leaders seem similarly disconnected from the implicit stance of the two sides. Consider these extracts from a short article in ekathimerini:

Greece will be able to reach agreement with its European partners and any turmoil poses little risk for Spain where the government is poised to raise its growth forecasts, Spanish Economy Minister Luis de Guindos said….

But in an interview for the Reuters eurozone Summit on Thursday, he said he was convinced a deal with Athens could be struck as long as it met eurozone rules, and that a Greek exit from the euro was not an option.

Um, where has he been this last week? The whole point of Varoufakis’ tour is to try to change the shape of the table, and that includes changing the terms of current bailouts. Now it may be that want de Guindos means by “eurozone rules” is more accommodative than it sounds to me, but he mentioned it twice, making it sound like a hard boundary in his mind. And how can he rule out a Grexit entirely? What if the Greeks were to start printing drachmas as a contingency? How would the Troika react to prudent measures in the case of worse-case outcomes, given what various observers, such our own Jim Haygood to Peter Dorman, see as an incompetent or malicious effort by the ECB to make the Greek bank run worse? The bigger Greece’s use of the ELA, the more it becomes a sticking point with Germany.

In the meantime, the Greek government continues to defy the Eurozone elite. This is almost a very high stakes version of Optor strategies, to show how bizarrely defensive the Eurocrats’ responses are to what amount to pinpricks. From ekathimerini:

Prime Minister Alexis Tsipras and Russian President Vladimir Putin on Thursday agreed to boost bilateral ties in a telephone conversation during which the latter invited the new Greek premier to an event in Moscow in May to mark the victory over Nazism.

The two men agreed to boost cooperation in the economy and energy, tourism, culture and transport sectors. They also agreed on the need to “secure peace and stability in Ukraine,” according to a statement from Tsipras’s office. Putin expressed satisfaction at Greece’s stance at a recent summit in Brussels where Greek Foreign Minister Nikos Kotzias conveyed concerns over the prospect of additional sanctions against Russia over Ukraine. Sources rebuffed rumors about financial support for Greece from Russia, noting that the government was looking toward its European partners for support. The two men also discussed the possible creation of a pipeline to carry natural gas from Russia to Europe via Turkey and Greece.

Now before you get excited, this means perilously little. Remember, Greece agreed to join the rest of the EU in extending sanctions against Russia. This is a statement at most of “It would be nice to be friendlier when EU/Russia relations come out of the deep freeze.”

But here is the funny part. The story continues with an astonishingly intrusive act by the NATO minders:

Meanwhile Defense Minister Panos Kammenos responded to comments by his German peer Ursula von der Leyen, according to which Greece was jeopardizing its position in NATO with its stance vis-a-vis Russia.

Here Germany and Europe still imports a ton of Russian energy, despite the deep freeze otherwise, and some businessmen have spoken out against the sanctions. And let’s get real here. It isn’t simply that Greece is a member of NATO. The US has an important naval base in Crete. With the US on site in Greece, it’s not going anywhere any time soon.

Here is the Greek response:

Kammenos called her comments “unacceptable and extortionate,” noting “Greece was always on the side of the Allies when they pushed back German occupation troops.”

As much as the cards remain stacked against the Greeks, this show of spine is refreshing. Let’s hope they can keep their resolve as the European officialdom tries to grind them down.