An Academy Health Blog post last week set both Lambert’s and my “something is wrong with this picture” alarm bells ringing. The article, How coverage and technology interact, cites mainstream, widely-cited studies on what allegedly drives health care cost increases. Here are the opening paragraphs:

As I posted previously, many studies have pointed to technology as a principal driver of health care spending growth. Those studies also credit third party payment (i.e., insurance) and income for some of the blame too. More interesting, coverage, income, and technology interact; their intersection is explored in a few papers summarized below. 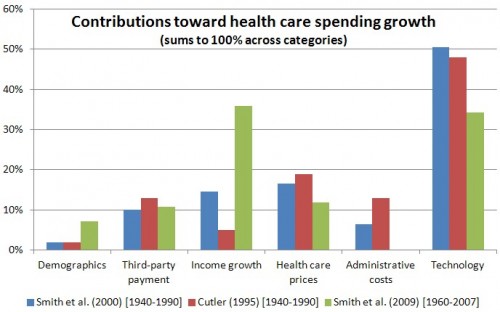 The 2009 paper in Health Affairs by Shelia Smith, Joseph Newhouse, and Mark Freeland is one of the sources for the chart above. (See this post for additional detail.) In it, the authors note that “interrelationships among technology, income, and insurance are strong,” which makes “it difficult to assign specific quantitative magnitudes to each factor.”…

Burton Weisbrod’s fascinating 1991 paper, “The Health Care Quadrilemma,” may have been the first to deeply contemplate the insurance-technology nexus. In it, he explained “how the expansion of health insurance has paid for the development of cost-increasing technologies, and how the new technologies have expanded demand for insurance.” Weisbrod recognized that the key linkage is the research and development (R&D) process…

This sort of thing drives me to despair. Go look at that chart. How can you begin to pretend that those categories are mutually exclusive? They aren’t even remotely, as even the snippet of the post I’ve provided demonstrates, and you’ll see even more proof if you read it in its entirety. So what is the point of engaging in the pretense of quantification when the explanatory variables are not at all discrete drivers?

And what should really get you skeptical is the vague term “technology”. What does that mean? Is a new drug “technology”? Even if so, what about all the new drugs (via FDA classification as “new drug applications”) that are merely exercises in intellectual property rent seeking? The overwhelming majority of NDAs (I’ve seen estimates of 88%) are not new drugs at all but merely minor reformulations, like an extended release version, that allow patent life to be extended and for price increases (the “new” version is pushed hard to doctors and always priced higher than the existing version).

But we don’t even have to get that granular. It turns out that “technology” is the error bar, all of the “not explained otherwise” factors. No, I am not making that up. From the 2009 Health Affairs paper cited above:

The conclusion that technological change explains much of the growth rests on a macroeconomic approach that seeks to estimate the contribution of known factors to health spending growth and assumes that most of the unexplained residual growth is attributable to technology.

Go look back and look at the chart again. How much faith can you put in an analysis where far and away the biggest single factor, in most cases accounting for roughly 50% of the total, is what you can’t otherwise explain? And worse, the researchers call it “technology” which makes it sound virtuous!

Let me give you a different picture of “technology” in medicine. I get annual physicals and an annual eye exam. Annual physicals are actually considered to be a waste of money but it is a tolling device for my doctor. I have one prescription (trivial and and old, cheap, medication) and prescriptions in pretty much all states are only valid for a year. So even though my dosage has been stable for years, and I could just get a simple blood test and maybe have a routine doctor visit associated with renewing the prescription, I have to go through the annual exam routine. By contrast, in Australia in the early 2000s, you could call your doctor for a prescription. Most of the time, if you were an established patient, they’d talk to you on the phone and issue it. They’d send you to a lab if they thought they needed to see bloodwork. The charge then was $A15. Cheaper and much less of a hassle for the patient (and also note Australian doctors are not as med happy as Americans; their response with a lot of conditions was “let’s wait and see” rather than running in to intervene).

While that sort of thing is sadly routine, it’s minor compared to my eye exam drill. All I really need annually is a glaucoma test (since my grandfather went blind from it, getting a test annually is warranted in my case) and a refraction test to see if I need my prescription changed (Getting an eye dilation test for them to look at the back of the eyeball is not a bad idea but I skip it as many years as possible since I can’t afford to not be able to read for four plus hours afterward). But I am put through a monster raft of tests, all with super fancy and I am sure super pricey equipment.

So as much as the MD annual exam drill bothers me, the upcharge from a regular office visit is only $75, and the rack rate is $250, since I refuse to get an EKG (not warranted in my case). So that is really not that bad. By contrast, the rack rate for my annual eye exam is $950, and that is with my skipping the dilation test. I can’t believe all these tests are necessary, but unlike my MD visit, where I know an EKG is not warranted and I can refuse it (and I don’t get any grief), I have no idea what all of these crazy eye tests are for and therefore am in no position to object to some of them.

Now is my eye doctor exploiting me? Exploiting my insurer? My insurer clearly does not think so; they always pay for all the tests (including the refraction, which is unusual). But this anecdote demonstrates that what is called “technology” looks to be in very large measure a US bias towards overtreatment. For instance, hardly any US doctors act the way one of my orthopedists did. I called his office to schedule an appointment because I thought I had broken my little toe. The doctor got on the phone and said: “Don’t bother coming in. Tape your little toe to the next toe and wear flats.”

The real issue is that health care in general, and US health care in particular, is a classic example of market failure. As we wrote in 2007, using a then-new book by Maggie Mahar, Money-Driven Medicine, as a point of departure:

The reason that [Tyler] Cowen supports Mahar’s assessment is that she explains why health care has failed in terms an economist can appreciate: she shows why the market has failed. One big culprit is information asymmetry. One of the conditions for a market to function well is that buyers and sellers have perfect information. In the medical arena, there is often a lack of good data as to what constitutes optimal practice. Among the many examples are the backing and forthing on hormone replacement therapy and mammograms. Now condiser: these treatments have been the subject of multiple large scale studies. Most protocols haven’t been investigated this intensely. And even when there is good information, the patient is at the mercy of his medical providers, the drug companies, and device makers. He can’t challenge their views; his best hope is to shop for a better practitioner, which is a costly, time consuming, and deeply flawed process (how can he judge whether a doctor is making sound recommendations?).

The other major element of market failure is the considerable disparity in buyer and seller power. If you are very sick, you will do anything to get better, which includes spending a lot of money. And our can-do, technology-loving culture favors doing more, whether beneficial or not.

The book has the most coherent, supportable, and fleshed out anti-market story I’ve seen. It both tries to explain why the current system works as it does, and historically how it evolved from more modest and less expensive ways of doing business. It’s not just a rehash of the usual stories about the VA system or France. The discussions of the growth of for-profit hospitals, the increasing specialization of medicine, the problems with pay for performance, and markets for medical devices are all full of interesting tales.

I interpret the basic story as this: the American health care cost spiral comes from suppliers and their entrepreneurial abilities to market expensive and highly specialized services of dubious medical efficacy. Medical care starts off as ambiguous in value and hard to measure in quality. Customers are cowed by doctors and other family members into accepting or even demanding what is offered to them. Third-party payments make the problem worse, and government intervention has stoked rather than checked the basic dynamic. You end up with massive expenses, lots of stupidity, and – because of its expense — radically incomplete coverage. Every now and then the extra services do pay off, but not frequently enough to boost American stats on health care quality.

In other words, when you hear “technology” invoked as the reason for health care cost increases, recognize that in large measure this is really code for “bad incentives plus new and improved snake oil salesmanship.” While some medical treatments are powerful and beneficial, too many are low efficacy, or cutting-edge whiz-bang with only marginal at best improvements over older, cheaper methods. It’s hard for doctors to opt out of this Gresham’s dynamic; patients are conditioned to expect too much, and to see more treatment as better treatment. But the biggest crime is that Obama had a once in a generation opportunity to remedy these problems. Instead, he doubled down on the failed, high cost, market driven model.