Yves here. Unlike many other comments on the state of Greece’s finances, this post takes a stab at Greece’s ongoing budget needs as well as its various debt due dates. Note that one uncertainty flagged here has been resolved in Greece’s favor. The Greek government will receive €550 million this month from the Hellenic Financial Stability Facility.

By Silvia Merler, recently an Economic Analyst in the DG Economic and Financial Affairs of the European Commission (ECFIN) and now an Affiliate Fellow at Bruegel in August 2013. Originally published at Bruegel

Discussions between Greece and its creditors are due to restart tomorrow. In the meantime, the pressure on Greece is increasing.   Here we take a look at the relevant deadlines ahead for the Greek State coffers.

As previously discussed, the path of redemptions to public creditors in 2015 is dominated by repayments to the IMF, T-Bills rollover and, in July and August, repayment of bonds held by the ECB. In March, Greece has 1.2 billion euros left to repay to the IMF, in three tranches: 335 million will be due on the 13th of March, 558 million on the 16th of March and 335 million on the 20th. On top of this, Greece will need to roll over 1.3 billion of T-Bills expiring on March 13th and 1.6 billion on March 20th. Once the March deadlines have passed, April and May will be relatively quiet, before funding challenges resume in June, and most importantly in the summer with the big tranches due to the ECB (see here for detailed dates on all payments).

Beyond repayments to official creditors, the Greek government also needs to meet its ordinary primary expenditures during the year, so it is useful to have an idea of what these are and how much they account for. According to the 2015 budget published in November 2014 (unfortunately available in Greek only) the ordinary primary expenditure at the State level is expected to be about 42 billion for the entire year. Total expenditures are expected to be 56 billion at the State level (see figures in the most recent the budget execution bulletin). 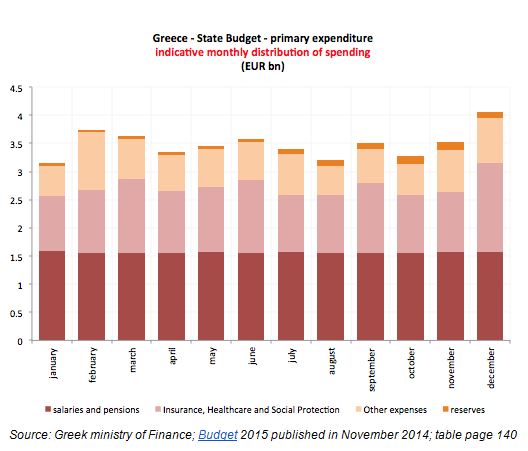 About 78% of the State ordinary primary expenditure is accounted for by payments of wages, salaries and pensions as well as of insurance, health care and social protections. An indicative monthly distribution of expenditures provided in the 2015 budget suggests that in March the government will need to pay about 1.5 billion in salaries and pensions and 1.3 billion in insurance, healthcare and social protection (with similar payments foreseen over the following months, see also Macropolis here). These are expenditure items that are not easy to avoid or reduce in the case of liquidity shortage, at least not without having a significant  social and economic impact.

ECB president Draghi reportedly told Greek Finance Minister Varoufakis yesterday that the Greek government’s books needed to be examined to determine its financing shortfall, and Commission, IMF and ECB staff are due to start the work in Athens on Wednesday. In the meantime, given the absence of real time data, it is very difficult to have an accurate impression of the exact state of the Greek State coffers.

According to a recent interview, finance minister Varoufakis suggested that the situation is not as rosy as previously thought:   “I can only say that we have money to pay salaries and pensions of public employees. […] For the rest we will see”. Kathimerini reported yesterday that the General Accounting Office has blocked any state expenditure not related to salaries and pensions. The same article reports a government official as saying that the budget has 4,772 expenditure categories – not salary-related – and that a review has allegedly saved about 180 million.

Recent analyses by Macropolis suggest that the government can rely on a number of sources in the very short term. Following two recent ministerial decisions, it could utilize cash reserves of 250 million euros from OPEKEPE, e organisation responsible for managing Common Agricultural Policy aid, and 114 million from the Hellenic Telecommunications and Post Commission (EETT). On top of that, the Bank of Greece’s financial accounts show that the profits for 2014 amount to 641 million euro which, according to Macropolis, were also transferred to the government at the end of February. Possibly, 500 million more could come from a fund in the Hellenic Financial Stability Facility which, according to recent news, could be drawn upon subject to a law amendment. 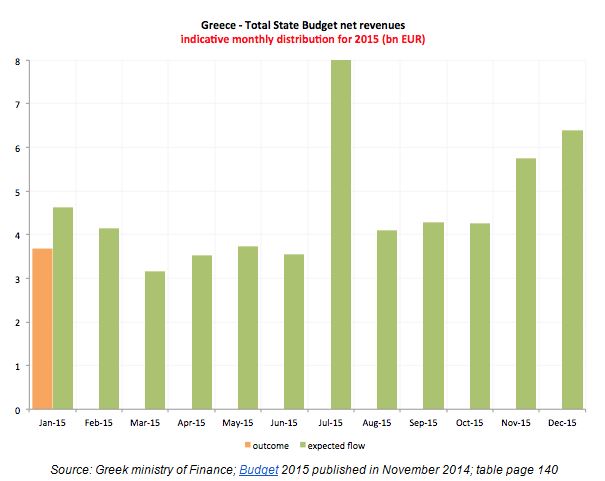 Altogether, this adds up to 1 billion, which could  be precious to Greece in the course of this month, but it does not seem to be a game changer if an agreement is not struck.

As previously shown, the Greek budget execution data for January showed a significant underperformance of revenues compared to the targets set.  According to the Ministry of Finance, this was mainly due to the extension of a VAT payment deadline until the end of February 2015 (Figure 2). The data presented here suggest yet another reason why this is worrying.  The budget execution data released in February will be key to watch.