A substantial portion of the site’s commentariat has wanted to believe that the Greek government’s defiance of the will of the Troika has been effective, either in and of itself, or as a means of preparing the Greek public and buying time before a Grexit.

As we’ve argued, Greece was almost certain not to prevail on its own. But outside help has been sorely lacking. While the US expressed concern early on, and argued the Greek case, that the nation needed debt writedowns and pro-growth policies, the Administration quickly abandoned its lobbying effort. The European left similarly has not taken up the Greek cause in a meaningful or consistent manner.

As for the notion that Syriza has been planning to depart the Eurozone, we argued that Finance Minister has long viewed that outcome as an unmitigated disaster for Greece and Europe. And perhaps most important, the government’s actions don’t bear that out. The first order of business should have been to impose capital controls. As reader Ishmael stressed, you declare bankruptcy before you run out of cash. This measure would have reduced the Troika’s leverage over Greece somewhat, and would be an absolutely essential step in preparing for a Grexit. Moreover, imposing those restrictions in response to withdrawals could have been positioned as a necessary protective measure if it had been done early on. Acting now would look like a desperate measure, either a last-ditch effort to protect the banks or an admission that Grexit risk was high.

Recall that in the talks over the memorandum between the Eurogroup and Greece last month, the final text did not come out of a negotiation. While Greece did submit draft language, the final version was dictated to Greece. The text was finalized without Varoufakis’ input, and Tsipras was presented with a “take it or leave it” version (one account said he signed the draft presented to him; another stated that Tsipras was permitted to change one word). That is not a negotiation. That is a diktat. And Greece has tried to deny that the text says what the Troika intended it to say (and how I also read it): that the hated existing structural reforms are in place. Greece may be allowed to negotiate substitutions that have no negative fiscal impact, and will hopefully be allowed to implement humanitarian relief (Varoufakis stated that that was agreed, but there hasn’t been much said either way by the creditors*).

Here is how the bank run played into Greece’s already weak hand. From the Financial Times:

Greek companies and households pulled €7.6bn out of their bank accounts during the government’s standoff with its international bailout creditors in February, driving deposits down to €140.5bn — the lowest level in 10 years.

Although the withdrawals were lower than in January, the €20.4bn pulled out over the two months shows how close Greece came to a full-scale bank run before Athens reached agreement with eurozone authorities to extend its €172bn bailout into June…

Originally, Greece’s EU rescue programme was due to expire at the end of February. Repeated failures by the new Greek government to reach agreement with eurozone creditors led to a rapid speeding up of capital flight. Officials said that in the days before an extension deal was reached, almost €800m was being withdrawn from Greek banks every day.

Jeroen Dijsselbloem, the Dutch finance minister who led eurozone negotiations with Athens, told the Financial Times last month that the massive withdrawals were the primary force pushing the Greek government towards an extension deal.

“Mainly, the situation in the banks was becoming very urgent, and that was the biggest driver,” said Mr Dijsselbloem. “If you have large outflows from your banks, you can do that for a couple of weeks, but there becomes a point where it becomes too critical.”

Now bear in mind that the bank run was more severe in January, when Syriza took office, than at the end of February. However, the level of outflows in February was significant, and more important, was hitting a banking system that was already weakened. When banks lose deposits, the normal response is to sell assets to provide funding. But in reality, banks have limited liquidity buffers, and once the outflows exceed a not-very-high level, the assets sold will be less liquid ones. That means the bank will lose money via distressed sales, turning a liquidity crunch into a solvency crisis.

And this chart from Bloomberg illustrates the lessening of the bank run in February looks to be a distinction without much of a difference: 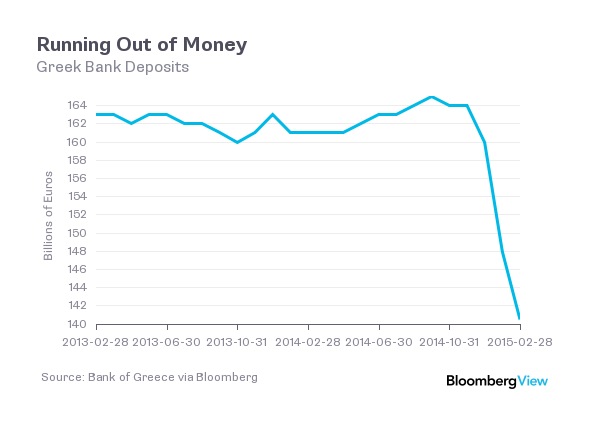 As Mark Gilbert put it:

So the Greek banking system had just a bit more than 140 billion euros at the end of February. That’s down almost 15 percent since the end of November, suggesting bags of capital are fleeing the country as fast as their little legs can carry them. And while extrapolation is an imperfect science, taking the trend from November and running it to the end of this month suggests there could be as little as 133 billion euros left at the current pace of withdrawals, which would be the lowest in more than a decade.

So what did Dijsselbloem mean by too critical? Back to the pink paper:

If withdrawals become so large that Greek banks are deemed insolvent, the European Central Bank would have to end its practice of allowing emergency loans to lenders to fund day-to-day operations. The only way to restart the banking system would be for Greece to print its own currency.

This is the scenario that is often described inaccurately as “accidental Grexit”. Bear in mind that any decision by the ECB to withdraw support would be no more an accident than the US refusal to backstop Lehman trading positions while Barclays got approval to buy the troubled firm. That decision was what left Lehman with no option other than to file bankruptcy. Paulson, Bernanke, and Geithner were under no illusion as to what the result would be. With the benefit of hindsight, they might deem it to be a mistake. But they’ve never tried pretending it was an accident. By contrast, the “accidental Grexit” meme in the media looks like an effort to pre-plant a narrative if the impasse continues and the powers that be decide the cost of letting Greece go is lower than the cost of the variances they insist on, given that Spain, France, Portugal and Ireland would also want the same breaks.

Mind you, Greece’s body language for the moment is that it will submit to the reform negotiation process. But we’ve had Greece buck the traces before. However, the threat of execution at dawn wonderfully focuses the mind. And Greece’s cash scramble and the resumption of its bank run shows that an endgame of some sort is approaching.

___
* I discount the offer by Jean-Claude Juncker of up to €2 billion in EU funds, which he said would go for humanitarian and growth projects. Some readers think it may come from programs that have onerous conditions, as indicated by the fact that Greece has monies available that it has not taken up.