Japan: “In the joint statement issued after the Tuesday summit, the [US and Japan said], “As the two largest economies in TPP, we are working to finalize the most high-standard trade agreement ever negotiated” [Japan Times]. tl;dr: No deal (yet). There is, however, a “joint vision” statement.

Abe to Congressional joint session, today: “Let us bring the TPP to successful conclusion through our joint leadership. The TPP goes beyond just economic benefit. It is also about our security. Long-term, its strategic value is ‘awesome'” [CNBC]. tl;dr: No deal (yet).

“On Tuesday, Mr Obama and Mr Abe emerged from an Oval Office meeting empty-handed, with unsettled differences between the United States and Japan over automobiles and agriculture” [Australian Financial Review]. And it’s not just rice, but wheat, pork, beef and dairy products (and constituencies). And personally, I want Maine’s small organic farms protected from globalization in all those areas — well, except rice, unless the Gulf of Maine gets an awful lot warmer — because when the trucks stop, we need to grow our own food.

“[Japan and the US] are not expected to reach a breakthrough on the outstanding issues in the bilateral trade talks this week” [Xinhua].

China on TPP: “We don’t think T.P.P. is a challenge to China — we will watch and study. We are more or less neutral because we have our own agenda, pushing forward Asean plus six and the Silk Road” said He Weiwen, a former Commerce Ministry official who is now the co-director of the China-United States-European Union Study Center in Beijing [New York Times].

Sanders: “I intend to do everything I can to defeat both fast track and the overall TPP agreement” [Guardian].

“[O]pponents of fast-track status are intimating that, after years of delicate negotiations among governments, Congress could amend a treaty, and other countries would just go along with it” [Boston Globe]. Given that we like to think that the United States is a functional democracy, and that “delicate” seems to be euphemism for “concealed from the public,” yes.

“[I]f TPP is approved, foreign corporations won’t have to get their national governments to intervene, for they will become governments” [Jim Hightower, Colorado Springs Independent].

When you’ve lost Vox… “Having America write the rules for trade in Asia sounds great until you realize that the people representing “America” aren’t necessarily focused on the interests of the American public at large” [Vox].

O’Malley cuts short trip to Ireland becaue of Baltimore riots [WaPo]. And his campaign, too, it’s hard not to think.

“Sanders is a politician whose power base is derived almost entirely from the people of the state of Vermont, where he is personally known to a surprisingly enormous percentage of voters” [Matt Taibbi, Rolling Stone]. Not, that is, a creature of the Beltway. (But I haven’t seen an actual announcement yet. Just “to announce.”

“[T]he book in which Rubio reveals he almost gave up politics has netted him more than $1 million, allowing him to finally pay off more than $100,000 in college debt” [Miami Herald].

Can politics be “unbundled” from political parties? [The Week]. “Unbundling” is an interesting trope; more generic and more general than “strange bedfellows.”

GDP for Q1, 2015: “Heavy weather and the strong dollar took their toll on first-quarter GDP which, at only plus 0.2 percent, came in at the very low end of the Econoday consensus. This compares with an already soft fourth quarter which is unrevised” [Bloomberg]. “[C]omplete lack of punch.” Doves happy. Wall Street Journal: Growth “nearly stalls out.” WaPo: “Lower than expected.” Barron’s: “Weaker than expected.”

Ticking off a litany of problems with the criminal justice system and the cycle of prison and poverty in black neighborhoods that “tears at your soul,” Mrs. Clinton said there is something “profoundly wrong” when “yet again brave police officers have been attacked in the line of duty” and when 1.5 million black men are “missing” from their communities because of incarceration and premature death.

She called for an end to “an era of mass incarceration” and a review of sentencing measures.

“We have allowed our criminal justice system to get out of balance,” she said.

I’ll wait for the transcript to see how concretely recent police killings were addressed; and I’ll also wait for concrete policy proposals more sweeping than body cams for police. What does “an end to the era of mass incarceration” look like? (Stifling the “end mass incarceration as we know it” joke, here.) For example, if there’s to be “sentencing review,” then what about people unjustly imprisoned?

“Night of calm” in Baltimore due to curfew, says Governor [New York Times].

Baltimore police shootings are almost twice as high as the next contender on the leaderboard, Oakland [“Officer-Involved Shootings, San Francisco Police Department (PDF, chart on page 7].

“I don’t think any mayor of any city of any size can rest assured that they’ll have no trouble this summer,” said Michael Flamm, a historian at Ohio Wesleyan University who is working on a book about urban riots [Governing].

“The East can expect a relatively cool summer while the West will continue to see above-average warmth, according to a temperature forecast for May through July released by The Weather Channel on Monday” [Weather.com].

“All across America, cities and towns are struggling to maintain enough revenue to provide crucial services to residents. The collateral damage of this revenue crisis—over-criminalization, utility shut-offs, the withdrawal of public services, and slashed budgets for schools—is dire” [The Nation]. And note that this revenue crisis has been a long time coming, and is (I would argue) the result of the failure of Obama’s stimulus package in 2009. Ben Polak and Peter Schott:

If the states and more importantly the localities had been bailed out, along with the banks, we wouldn’t be in the pickle we’re in.

November trial state set for Sheldon Silver [AP]. Note the difference between URL and the story!

“[A]bout 34 liters of water are used in the cutting, sewing and finishing process to make a pair of Levi’s signature 501 jeans, the company said.” [Wall Street Journal, “Why the California Drought Matters to the Fashion Industry”]. “It is the repeated washing to get the premium look. This is what people pay for.”

“The bottling plant that Starbucks uses for its Ethos customers in the western United States is located in Merced, California, which is currently ranked in the ‘exceptional drought’ category [Mother Jones].

Readers, feel free to contact me with (a) links, and even better (b) sources I should curate regularly, and (c) to find out how to send me images of plants. Vegetables are fine! Fungi are deemed to be honorary plants! See the previous Water Cooler (with plant) here. And here’s today’s plant, the third of “Spring is here!” week one (Tom): 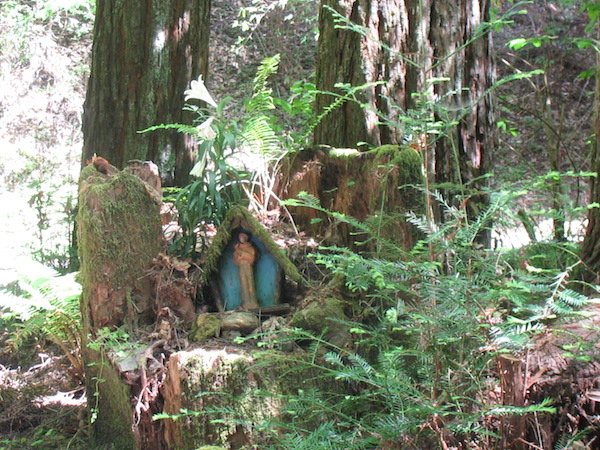 St Francis in a redwood. Reminds me of holy trees in Thailand — though not so colorful!