I was leafing through the paper version of the New York Times while eating a pizza the other day, when I came on this story about Cooper Union, the prestigious and excellent New York college of art, architecture, and engineering. The picture struck me: 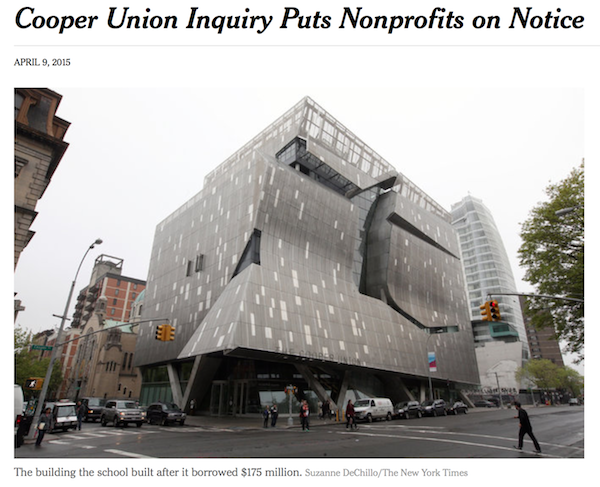 (Caption: “The building the school built after it borrowed $175 million.”) Man, I thought. That’s one ugly building. It reminded me of this image[1] from book one of Christopher Alexander’s The Nature of Order (page 358), a proposal for an addition to the Victoria and Albert Museum in London: 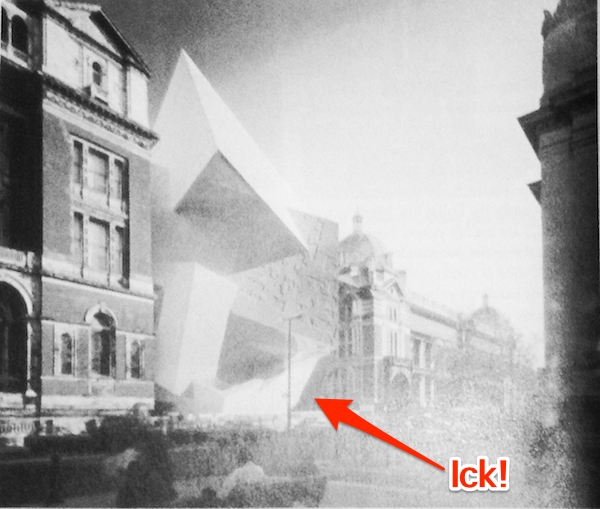 The Director of the Victoria and Albert Museum has recently been quoted as giving a glowing justification for his decision to build a monstrosity in London… The building shape intentionally violates most of the characteristics of living structure (I assume it is intentional, in an effort to be artistic, since the diversion from these structural features is too extreme to have happened by accident).

If we ask ourselves whether the addition of this structure to the museum and to the street helps our sense of wholeness, I believe the answer is almost obvious, that it does not. Of course, one can apply the other versions ot this criterion too. Does the street become a better picture of the deepest self? Does it (in any interpretation) bring a passer-by closer to his own true self? Does it feel alive?

No, no, and no. One is tempted to say: Never support a board that votes for a structure like this[2]. And so it has proved with Cooper Union![3]

Here’s the backstory from the Times on that ugly building (“the New Academic Building” (41 Cooper Square). The physical architecture may be horrid, but the financial architecture is worse:

Cooper Union’s board took a series of financial steps that, with benefit of hindsight, seem misguided. The school borrowed $175 million for 30 years at a rate of 5.75 percent and then spent most of the proceeds on a lavish new building while continuing to run operating deficits. It also agreed to a prohibitively expensive prepayment penalty, making it financially impossible to extricate itself from the terms of the loan, according to people with knowledge of the agreement who spoke on the condition of anonymity. One of the issues in the current investigation is whether Cooper Union disclosed this potential penalty when it sought court approval for the loan.

And you just know private equity is involved, right? Cooper Union owns the Chrysler Building, and:

Much of the remainder [of the endowment] is invested in hedge funds, private equity partnerships and other so-called alternative investments, in part to try to reduce the risk associated with an endowment so concentrated in a single New York office building.

So, in a shocker:

[S]uch investments are typically burdened with high fees, and their returns in recent years have been disappointing. Cooper Union’s endowment increased 6.1 percent for the fiscal year ending June 30, 2014, and a meager 1.65 percent if the Chrysler Building is excluded.

I won’t say “breach of fiduciary responsibiity,” let alone “fraud,” but feel free to think them. In any case, as a putative result of these self-inflicted financial wounds, the Board decided in 2013, for the first time, to eliminate full scholarships for all students, in defiance of founder Peter Cooper’s original intent of “a perpetual course of  free lectures and instruction.” A two-month occupation of the President’s office by students and faculty followed (often linked to at NC), in addition to an alumni and student lawsuit, under the rubric of Save Cooper Union. The Petition is juicy:

The defense of financial necessity [for charging tuition] reveals a breach of fiduciary duty because it is evidence of the extent to which the Board has undermined the financial health of The Cooper Union. Without regard for the manifest risks, the Trustees built an extravagant new academic building that the school could not afford.  The Trustees compounded the impact of this mistake by squandering the endowment through investments in risky hedge funds, questionable real estate transactions, and improvident increase in debt.  The Petitioners maintain that the Board of Trustees has permitted the school to engage in numerous financial transactions that bear no reasonable relationship to the educational purposes of The Cooper Union, have failed to properly  supervise the administration of the school with respect to financial and academic issues, and has engaged in improper self-dealing.

Then-Trustee William Sandholm’s company directly benefitted from the construction. Rose Associates, of which Mr. Sandholm is Chief Operating Officer, profited directly when Jonathan Rose of Rose Associates secured a $2 million contract to oversee the New Academic Building construction despite the obvious conflict of interest.  Mr. Sandholm was also the Chief Executive Officer of Astor Place Holding Co., which was in charge of The Cooper Union’s real estate holdings.

Commendably — although, since this is “New York real estate,” who knows what the real motivation is — Eric Schneiderman has stepped in. The Wall Street Journal:

New York state Attorney General Eric Schneiderman is investigating financial decisions at Cooper Union for the Advancement of Science and Art that led to the school’s move to charge undergraduate tuition for the first time in its history, according to board members. … Part of the investigation entails the school’s management of one of its most valuable assets, the land underneath the Chrysler Building, said people familiar with the probe. … The probe includes a look at several decisions by Cooper Union’s past and present trustees, according to people familiar with the investigation. Among them: a $175 million loan, using the Chrysler building as collateral, to help finance more than $100 million in new Greenwich Village facilities, the people said.

Mr. Schneiderman’s office is also reviewing the terms of the school’s lease agreement at the Midtown skyscraper with real-estate company Tishman Speyer, a bonus that the board approved for former President George Campbell Jr. and potential inaccuracies about the board’s financial decisions on the school’s official website, the people said.

Pass the popcorn. Let’s just hope Schneiderman doesn’t wuss out on this one, eh?

The Cooper Union website reflects the importance of supporting working class education in its recounting of the school’s origins: “Cooper was a laborer’s son who achieved greatness despite a lack of formal education. He believed that education should be ‘as free as water and air’ and so created The Cooper Union for the Advancement of Science and Art, one of the first colleges to offer a free education to working-class children and to women.”

It’s an act of civic vandalism — not to mention class warfare — for the conflicted and corrupt Trustees to liquidate Cooper’s goal; they should one and all resign.

In fact, Cooper Union shows the way forward for the entire country; why can’t college tuition be “as free as water and air” to all? The country can certainly afford it, if they can in Germany.

However, until that happy day, we can at least take some comfort that the students, faculty, and alumni of Cooper Union are in there punching, and the malefactors of great wealth on the Cooper Board of Trustees are feeling some pain.

Oh, and the Trustees just threw the President, Jamshed Barucha, under the bus in an effort to save themselves. Too funny!

[1] I don’t have a working scanner, so I had to photograph the page with my iPad and then clean up the image. Hence the quality.

[2] This is not a post about whether the 41 Cooper succeeds or fails as physical as opposed to financial architecture for those who must use it, though there are indications that it fails. The issues have to do with circulation, specifically the elevators and the “grand staircase.” The New York Times:

The building’s flaws, though, lie not in a failure of vision but in questions about its execution. The most serious of these have to do with circulation. I expect there will be complaints, for example, about the main elevators, which only go up to the fifth and eighth floors. The system is based on a design by Le Corbusier, who used it in his 1952 Unité d’Habitation housing block in Marseilles. … Most students will have to walk an extra flight up or down to get to their classes.

Another subtle but important problem is the depth of the treads on the grand staircase. The stairs in front of the Metropolitan Museum of Art are 14 inches deep, which is what makes them such a nice place to sit, rest, chat with a stranger. Mr. Mayne’s stairs are a standard 11 inches, like a conventional fire stairwell. They are hard to sit on, and they gave me vertigo when I began my descent from the third floor.

So, we’ve got a staircase that gives people vertigo, and an elevator design that makes students at a commuter school take an extra flight of stairs to get to class. And neither of those are a “failure of vision.” Alrighty then. Harvard Design Magazine:

Even at flat rest, the circulation is outfitted to contain action, not spectatorship. This detail reminds one that, in its triumph, the building’s circulation can also be cruel. Precisely because it demands fitness from its users, the steep stairs in combination with the skip-stop elevator system will preclude full participation by the disabled, the elderly, the weak, and the infirm. Technical universal accessibility standards will be met with a service elevator that does stop at each level, but the stairs are the means of kinetically connecting with the full impact and import of the design. Unlike the gentle sloped walks of, say, Wright’s Guggenheim Museum, which allow full peripatetic engagement with the common periphery of an empty void, the New Academic Building’s activation of its atrium will be fully appreciated only by the agile.

Wowsers. $175 million for a building that “the weak” can’t use. Is there a better demonstration of the neo-liberal mindset in action? All that said, I’d love to hear from any Manhattan readers familiar with the space. Perhaps I’ve been overly harsh.