It’s not just workers in the oil field who are getting axed as drilling rigs are being idled. It’s spreading to industries that supply the oil and gas sector. Broader weaknesses in manufacturing are cropping up as well. And they wormed their way into the Dallas Fed’s Texas Manufacturing Outlook Survey.

Hence, the second negative reading in a row (-4.7), after a zigzagging decline since the exuberance of last summer, just before the oil bust hit. It was a gloomy read:

Other measures of current manufacturing activity also reflected continued contraction in April. The new orders index edged up but remained negative at -14. The growth rate of orders index held steady at -15.5, posting its sixth consecutive negative reading. The capacity utilization index pushed further negative to -10.4, its lowest level since August 2009, and the shipments index edged up but stayed below zero at -5.6.

Perceptions of broader business conditions remained quite pessimistic for a fourth month in a row. The general business activity index stayed negative but ticked up to -16 in April, while the company outlook index moved down to -7.8, reaching its lowest reading in nearly two and a half years.

In the comments section, the executives decorated their gloom and doom about the oil sector with gripes about the weather, which had been nasty, and about the dollar, which is too strong for exporters, but not strong enough for importers. Here are some highlights, by sector. Note the issues beyond oil and gas:

“2015 started slower than expected. Lower energy prices have adversely impacted our business in the energy sector; other businesses are steady but aren’t showing the growth we would have expected. The environment is tepid at best.”

“Steel imports continue to be a big problem, especially into Houston. Steel rebar is the most problematic, with high levels of imports and very low prices.”

“We continue to see a drastic slowdown in incoming orders from all sectors (energy, mining, agriculture, waterworks, general industrial). At a recent meeting with several foundries across the state, the trend continues to indicate a depressed state of business for industrial manufacturing.”

“Our oil and gas customers have come to a complete stop. It looks like everyone in the industry is digging in for a long-term trough. It looks like the graph will not be a “V” with a short flat bottom, but a graph that looks like a bathtub with a large drain at one end that will take some suppliers down.”

“Orders have fallen rather significantly, and the refinery turnaround business is being slid out to late fall or early next year. It is going to be a tough summer.”

“Things are getting ugly in all of our locations in Texas and Oklahoma. Total business is down 20% year to date, and we do not believe we have seen bottom….”

Last week, it was the Kansas City Fed, which released a disturbing manufacturing survey. The District covers the western third of Missouri; all of Kansas (including aircraft manufacturing hub Wichita, see below, because it’s not just oil and gas!), Colorado, Nebraska, Oklahoma, and Wyoming; and the northern half of New Mexico.

The composite index – an average of the indices for production, new orders, employment, supplier delivery time, and raw materials inventory – plunged to -7, after having already plunged in March to -4, after having been in growth mode for over a year. The report explained it this way:

“The last time the composite index was lower was in May 2009.”

The report added additional flavors: “Regional factories had their worst month in quite some time, as exports continued to drop and conditions worsened among producers of oil and gas-related goods.” This is what that trend looks like: 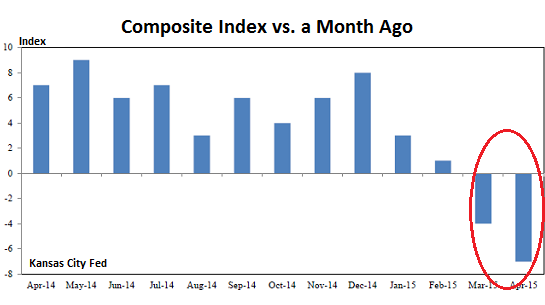 The troubles range beyond oil and gas. The report blamed “continued weakness in metals and machinery’ and “declining durable goods manufacturing, including a sharp decline in aircraft production.” That’s in Wichita. And “the order backlog and employment indexes dropped to their lowest levels since 2009.” These unnerving comparisons to the Financial Crisis years!

In the comments, exporters complained about the strong dollar, importers raved about it, and there were those that did both. Some highlights beyond the dollar:

“The durable goods sector just isn’t very good, impacted mightily by the price of oil. We are reducing headcount and spending where possible….”

“Competition for business is fierce especially with the low cost labor and better logistics from Mexico. We are finding more and more customers moving manufacturing operations to Mexico.”

“West coast port disputes have us out of stock on key items. No information available on when we will receive products. We will look at reducing our employee count next month if we do not receive goods in April.”

So I talked to my car-dealer friends in Oklahoma. They’re worried – about more than the fracking-caused earthquakes that they now have to deal with and that their showrooms may not be designed for. But so far, the malaise hasn’t shown up in retail sales yet, they said, thought there was perhaps a slowdown in commercial sales, such as trucks for oil-field services companies, welding shops, and the like.  They’re hopeful that it won’t impact the bottom line, or at least not for long. Dealers are optimists by nature. That’s the good news. The bad news is that they’re lagging indicators.

Financial assets are immune to any of it. Junk bonds are now in “extreme overvaluation,” and covenant quality drops to record low, according to junk-bond guru, Marty Fridson. New money pours into troubled companies, even as old money gets whacked. Read…  This Is What’s Happening in Junk Bonds, and It’s Not Pretty