Yves here. I’m quite interested in reader reactions to this scheme. My big reservation is that the amount of the scrip devised by the authors, the TCC, has to be limited to the an amount of discount of future tax payments that is deemed to be credible. Given that Bill Mitchell has estimated that Greece needs to run deficits on the order of 10% of GDP in order to bring the economy back to growth. The World Bank shows Greek tax revenues at 22.4% of GDP as of 2012. Perhaps I am missing something, but it is hard to see on an aggregate level how enough TCC can be issued to achieve the desired growth targets.

And there are other challenges to Greece independent of the merits of this idea. The big ones are that the seemingly inevitable IMF default may lead the ECB to decide to increase the collateral haircuts for banks for use with the ELA. Most experts believe that the default alone will accelerate the bank run and force Greece to impose capital controls, since Greek banks will run out of eligible collateral irrespective of whether the ECB makes its standards tougher (it just happens faster in that event). Many experts believe that capital controls would dampen economic activity, both directly and indirectly (via hurting confidence). The ECB may also decide to use the threat of removing the ELA to force Greece into a Cyprus-style bail in. That would be a huge hit to an already weak economy. It’s hard to see, even if TCCs work as well as the authors believe they might, that they could offset downdrafts of this magnitude. Moreover, even normally sensible economic writers like Wolfgang Munchau have suggested that Greece should accept a fiscal surplus target of 2.5%, which is severely contractionary. If Greece winds up agreeing to terms like that, again it is hard to see even how a well designed parallel currency can undo the damage.

Introducing a Parallel Currency in Greece

The first column in this two-part series (Bossone and Cattaneo 2015) illustrated various options to design a parallel currency for Greece, which aims to avoid Grexit while helping Greece repay its external debt and resume economic recovery. This second part presents an evaluation of the different options, reports the results of our research – which simulates the application of a tax credit certificates programme to the case of Greece – and draws some conclusions.

The proposals discussed in Part I can be evaluated on the basis of how each type of currency design would be expected to impact domestic aggregate demand and fiscal variables. The following observations can be made.

• Cochrane’s IOUs seem to be working at best as a stopgap measure, in that they would enable to government to make payments and release euros to service the debt. Yet, the solution would likely not be sustainable over the medium term, since the IOUs would create a new class of government euro-denominated debt obligation, which nobody would know whether, when, and how the Greek government would honour. Also, issuing IOUs would only replace scarce euros but would have no stimulation effect on domestic aggregate demand, output, and employment.

• With regards to Parentau’s tax anticipation notes (TANs), unlike Cochrane’s IOUs, they would not represent debt obligations for the issuing government. As to the other effects, they depend on how the proposal is interpreted. If the tax notes are issued and used as a replacement for scarce euros for government payments, they would act as a stopgap measure, like Cochrane’s IOUs, but would do nothing to add to domestic aggregate demand. This conclusion would change if the issuing government were to assign them to citizens as extra (additional) endowments, supplementary to their income sources. Regarding their impact on the budget, as tax notes were used to extinguish tax liabilities, they would cause shortfalls of government euro revenues and increase the deficit to be financed with new debt or taxation. Unlike tax credit certificates (TCCs), the notes would bear no deferred maturity and would not provide time for new fiscal resources to be generated as an offset. Finally, unlike the tax certificates proposal, Parentau’s tax notes would not be issued to enterprises with a view to reducing their tax bill and, hence, their labour cost, thus improving their external competitiveness.

• As to Varoufakis’ proposal, the FT-coins would not bring many additional resources into the economy. Individuals get FT-coins in exchange for euros they already possess. The creation of additional purchasing power for individuals and enterprises would only grow inasmuch as the FT-coins were sold at a premium vis-à-vis their face value, based on their above-par tax-worth to the state. Giving them away free of charge – similar to helicopter money, as per the tax certificates proposal – would make their impact more effective. As in the TCC model, the multiplier effect set off by the additional spending would have to generate the resources to cover the euro shortfalls that would affect the budget at the time of FT-coin redemption. However, all else equal, the multiplier effect triggered by the FT-coins would be weaker than under the TCC option since the spending leakages through the external trade channel would not be offset by larger exports through labour cost reductions (which TCCs make possible).

• Finally, the TCC option would not suffer from the above weaknesses. TCCs would create additional spending power, avoid negative external trade effects, and generate resources to offset euro shortfalls from tax reductions at TCC maturities. They would also have safeguards to protect the budget from the risk of fiscal under-performances (see below).

Implementing a TCC Programme in Greece

Introducing TCCs in Greece could take the economy rapidly out of depression by prompting a strong recovery of output and employment. In the Annex below, a ‘base case’ (without TCCs) is compared with an alternative scenario (with TCCs) contemplating the issuance of €8 billion (4.5% of GDP) equivalent of TCCs in the first year of the programme, increasing to €16 billion, and €24 billion in the second and third years, respectively, and staying unchanged thereafter. The alternative scenario is run under two different hypotheses:

• A ‘baseline’ hypothesis, which assumes a 1.3 fiscal multiplier (that is, a 1.3 increase in GDP per every TCC issued on a yearly basis); and

• A ‘conservative’ hypothesis, based on a much lower fiscal multiplier of 0.8.1

In the base case, Greece achieves some modest real growth, with the 1.9% average primary surplus only allowing it to attain a very limited reduction in the public debt ratio, from 183% to 178% in five years. On the other hand, in the alternative scenario under the baseline hypothesis (1.3 multiplier), output strongly rebounds with real GDP growth averaging 4.3% over the five-year forecast timeframe. Meanwhile, the average primary surplus grows to 3.5% of GDP, causing the public debt ratio to fall to 131%.

Even under the conservative hypothesis (0.8 multiplier), Greece would average a more than decent 2.4% real GDP growth, while the public debt ratio would fall to less than 161% and the primary surplus would undershoot the 1.9% target, averaging 0.9% nonetheless.

What to Do in Case of Fiscal Underperformance

A number of escalating safeguard clauses would be introduced in the TCC programme to protect the budget from the event of fiscal revenues not growing in line with the primary surplus targets:

• First, the Greek government could announce a commitment to paying a fraction (presumably, a small one) of its public expenditure with TCCs.

• Second, taxpayers could be entitled to receive TCCs as compensation for additional euro tax payments. Basically, this is equivalent to replacing a tax rise with a compulsory TCCs-for-euro swap.

• Third, TCCs holders could be incentivised to postpone the use of TCCs for tax discounts by receiving an increase in their face value (equivalent to an interest being paid on TCC holdings in the form of additional TCCs).

• Fourth, the government could raise euros in the market by placing TCCs with longer maturities instead of debt bonds.

It should be noted that these safeguards are much less pro-cyclical than those that would be imposed by the EU to secure budget targets in the event of fiscal under-performance. It can be immediately seen that one or more of these safeguards, possibly used in combination, would easily accommodate even significant shortfalls in primary budget surplus targets.

As an example, under the conservative hypothesis above, the resulting 1% primary surplus shortfall (0.9% instead of 1.9%), equivalent to approximately €2 billion in the case of Greece, could be accommodated by offering some interest inducement to the bearers of TCCs maturing every year (up to €24 billion, as assumed above). Alternatively, the postponed inducement could be used to delay €1 billion equivalent of maturing TCCs, while €0.5 billion could be recovered from using TCCs to pay for some government expenses and the residual gap could be covered through a compulsory TCCs-for-euro swap with high-income earners. The impact of such safeguard measures would obviously compare much favourably with the recessionary effects of the same adjustment operated via spending cuts and/or tax hikes under the Stability and Growth Pact.

There are alternatives to austerity as the only adjustment rule for Greece, a rule that while dramatically impoverishing the country is also proving ineffective in reviving credible growth prospects. Introducing a currency in parallel to the euro could help Greece change trajectory and move out of depression rapidly, provided that the currency is designed in a way that carries incentives for private-sector spending.

A variety of options have been proposed. These have been illustrated and discussed in this two-part column. All options require the state to transform future tax revenues into immediate spending capacity. Each option, however, has a very different expected impact on domestic aggregate demand and fiscal sustainability. We believe that only the tax credit certificates, used as a quasi-currency, would have enough power both to create new spending capacity and to generate enough resources to pay for themselves over a recovering economic cycle. Also, sufficient safeguards can be built on these certificates, which would protect the budget against the risk of fiscal under-performance in a way that would prevent new austerity measures from becoming necessary.

The ‘base case’ assumes an agreement is reached between Greece and its creditors, whereby debt is refinanced in exchange for a Greek commitment to generate an average primary budget surplus of 1.9% of GDP over a five-year time horizon. Based on recent market indications, this is broadly consistent with the most favourable attitude toward Greece, which creditors would be prepared to take in order to avoid a potentially disruptive default, with possible Grexit. The base case also assumes that Greece is able to achieve an average 1% GDP real growth under the base case, while inflation (currently strongly negative) would average 0.5% per year.

In the alternative scenario, due to TCC use for tax reduction two years after issuance, the schedule of TCC issues, uses, and amounts outstanding would be as follows:

The total amount of TCCs outstanding would then attain €48 billion at the end of Year 5, to stay unchanged thereafter.

The simulation results are reported in the prospect below. Our simulation exercises can be made available to readers by request. 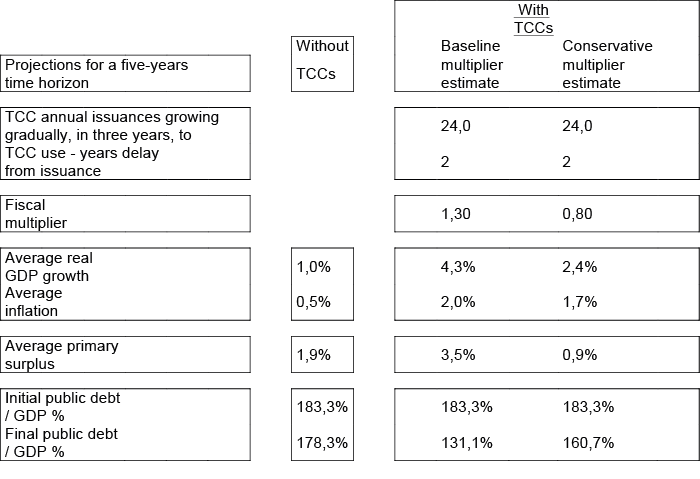 Note that TCC issuances are not included in the public budget, since TCCs do not imply any reimbursement commitment for the issuing government and (accordingly) do not constitute debt items.

[1] Note that a quota of the TCC issuance is allocated to enterprises as a function of their labour costs, which directly improves Greece’s competitiveness and offsets through larger export the external trade imbalances that would otherwise be caused by the extra import driven by demand growth. Also note that the value of 1.3 chosen as a baseline hypothesis is the midpoint of the 0.9–1.7 range estimated by Blanchard and Leigh (2013). This value is rather prudent considering that the fiscal multiplier tends to be considerably higher in situations of economic depression.