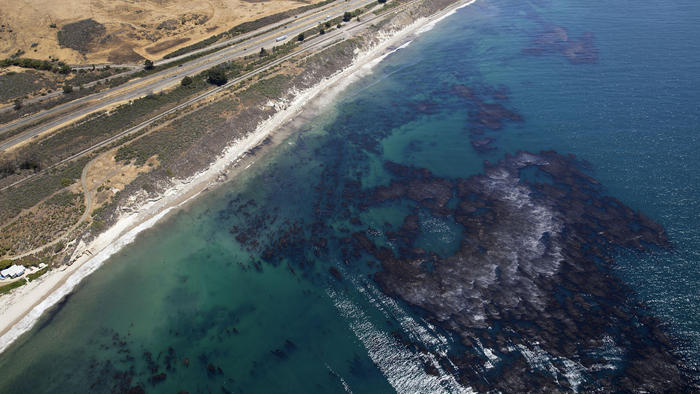 Thoreau once wrote, “We do not ride on the railroad; it rides upon us.” The full quote is:

We do not ride on the railroad; it rides upon us. Did you ever think what those sleepers are that underlie the railroad? Each one is a man…. The rails are laid on them, and they are covered with sand, and the cars run smoothly over them. They are sound sleepers, I assure you. And every few years a new lot is laid down and run over; so that, if some have the pleasure of riding on a rail, others have the misfortune to be ridden upon.

It’s likewise said that we don’t grow corn; corn grows us, then uses us to spread its genetic material around the country and the world at our expense. At that task, corn is successful beyond its dreams.

In the same way, we don’t burn carbon — oil and gas. By burning the earth, it burns us, and in the process uses us to burn itself, to desequester its long earth-buried atoms and reenter the atmosphere as a gas. Through most of the history of life on earth, CO2 has been far more prevalent in the atmosphere than it has been during the age of humans.

The blue line near the middle shows CO2 concentration during the age of humans, which started about 200,000 years ago. The horizontal dotted line shows 400 ppm, where we are today. The tall red line on the right is where we’re headed by 2100 under “business as usual.” Notice how neatly that matches most of the past (source).

As reported by the LA Times and the Santa Barbara Independent, there’s a pretty serious oil spill off the Santa Barbara coast in an area called Refugio State Beach. The source of the spill is a shoreline pipeline whose leak detection mechanism apparently failed to work. The leak poured what was first reported as 21,000 gallons of oil into the ocean …

… but those estimates were apparently provided by the pipeline company itself, Plains All American Pipeline, to the Coast Guard (my emphasis throughout):

The accident has been classified by federal responders as a “medium-sized” spill and was traced to an underground pipeline a few hundred yards inland above Highway 101. The 24-inch pipe is owned and operated by Houston-based Plains All American Pipeline, which stopped the leak at approximately 3 p.m. It’s unclear how long the pipe was leaking, what caused it to break, or exactly how much crude escaped. Plains initially reported that 21,000 gallons of oil made its way into the ocean, but that number is expected to rise after county, Coast Guard, and state Fish and Wildlife personnel tally the true damage.

Nice of the Coast Guard to take the company’s word and make it their own. An update at the Independent offered this correction:

Lt. Jonathan McCormick with the U.S. Coast Guard said an estimated 21,000 gallons of oil spilled into the ocean. That estimate comes from Plains All American Pipeline. An independent assessment has not yet been completed, he said, and it’s unknown how many gallons of crude remain on land and along the shoreline.

The latest news from the AP puts the number of gallons much higher:

BREAKING: Pipeline company: Up to 105,000 gallons of oil might have spilled from California line.

I’m willing to bet that’s not the last word, especially since the source is, again, the pipeline company, with an economic interest in underplaying the problem.

About That Pipeline Company …

The version of the story at the Independent has some background on Plains All American Pipeline:

Founded in 1998, Plains All American Pipeline is in the business of transporting and storing crude oil and natural gas all over the continent. According to the SEC, the company’s net revenue last year was $1.39 billion. Tuesday’s spill was the latest in a number of similar accidents in recent years. The EPA has recorded at least 10 serious incidents in Texas, Louisiana, Oklahoma, and Kansas; between June 2004 and September 2007, more than 273,000 gallons of crude was leaked, and in a 2010 settlement with EPA, the company agreed to spend $41 million to upgrade 10,400 miles of pipeline and pay $3.2 million in civil penalties. In 2011, Plains’ Canadian division was responsible for three major accidents in Alberta.

Last May, a 130-mile Plains pipeline that runs through Los Angeles County ruptured and sent 19,000 gallons of crude through the streets of Atwater Village. The leak lasted around 45 minutes, covered a half-mile area in oil, and caused the evacuation of nearby buildings. According to news reports, Plains was not aware of the spill until residents called the city fire department, which then had to notify the company.

Not a small company. And it apparently swings enough pipe of its own to get special oversight dispensations:

The broken Plains pipeline funnels 45,000-50,000 barrels of produced oil a day between ExxonMobil‘s Las Flores Canyon Processing Facility near Refugio to the Plains-owned Gaviota pumping station. From there, it travels to refineries in Kern County. The 10-mile pipeline was installed in the early 1990s. Notably, it’s the only piece of energy infrastructure on Santa Barbara County land that’s not under the county’s watch. When pipe was put in, Plains successfully sued to place it under the supervision of the State Fire Marshal’s Office, arguing state management pre-empted local oversight.

I’d be remiss if I didn’t tell you that Plains is “sorry” and “deeply regrets” the incident. So do their stockholders, but I’m guessing on that. The stockholders have yet to speak.

California’s District 24 is represented by Lois Capps, who was quoted in the Independent as saying:

“I am deeply saddened by the images coming from the scene at Refugio,” Rep. Lois Capps said Wednesday morning. “This incident is yet another stark reminder of the serious risks to our environment and economy that come from drilling for oil.”

While Capps may be a friend of the coastline (by backing sure-to-fail bills in the U.S. House), she’s also a corporate-friend member of the New Dem Coalition and refused to take a position on county Measure P, which would have banned fracking in Santa Barbara County and the Channel Islands.

Most Santa Barbara County residents didn’t vote on Tuesday, but those who did made one thing clear: They didn’t support Measure P. Shot down by a whopping 62.65 percent of voters, the contentious initiative — which would have banned all new fracking, acidizing, and cyclic steam injection wells in the county’s unincorporated regions — pitted environmentalists sounding the alarm on climate change against the oil industry calling for fair regulations. And the oil industry — with help from operators in Santa Barbara County and beyond — dug into its deep pockets, shelling out approximately $6.6 million to defeat the measure, while Measure P supporters raised just more than $400,000.

You can buy a lot of votes and lay down a lot of fog with $6.6 million … in a county election no less.

Lois Capps is retiring after this term and Blue America is looking for a replacement who is more in keeping with what the district needs. In the meantime, in a neighboring district, CA-44, Blue America has endorsed progressive candidate Nanette Barragán.

About that race, Howie Klein writes via email:

CA-44 is an open congressional seat because Janice Hahn is running for Supervisor. One of the most corrupt Sacramento politicians, Isadore Hall, is the Establishment fave. He’s the second biggest recipient of money from Big Oil in the legislature and he’s the lobbyists’ favorite lawmaker. His opponent, Nanette Barragán, got into politics fighting Big Oil— and beating them.

You can contribute to the Barragán campaign, along with other Blue America candidates, here (adjust the split in any way you like, including 100% for Barragán).

We End Where We Began

We began this piece with the idea that the trains ride us, the corn gene breeds us and feeds us for its own propagation … and our oil burns us so it can return to the skies.

You’re a villager on Easter Island. People are cutting down trees right and left, and many are getting worried. At some point, the number of worried villagers reaches critical mass, and they go as a group to the island chief and say, “Look, we have to stop cutting trees, like now.” The chief, who’s also CEO of a wood products company, checks his bottom line and orders the cutting to continue.

And now is the time to make it. We can end the rule of carbon, and those who suck money from it, the minute we really want to.