The Greek government appears to have decided to resolve the inherent contradiction of its political promises. The ruling coalition has creditors’ demands that Greece adhere to the terms of an exiting bailout deal, in particular “structural reforms” like cutting pensions, “reforming” labor markets, raising VAT, and continuing with privatizations, while paying its debts and staying in the Eurozone. After a flurry of weekend negotiations, trying to get some movement from the Troika and Eurogroup before a Eurogroup meeting today at which no resolution was expected, Greece has started, late in the game, to threaten to default.

Remember the state of play: Greece is still in the Troika’s sweatbox, and is clearly, desperately short of cash. The body language of the Greek government is a bit too obvious that it really, really needs the €7.2 billion in so-called “bailout” funds in order to make a €750 million payment due to the IMF on Tuesday, May 12, as part of a repayment plan set in 2010. Greece no longer has a primary budget surplus, so the longer the negotiations (or more accurately, impasse) continues, the more dire the Greek government position becomes. It has already stiffed, um, delayed payments to vendors to the government in order to make IMF payments in April and May. And as has been widely reported, the government has also ordered local governments and universities to turn over spare cash for the government to “borrow” to make payments. Many officials in these institutions have objected loudly and some are withholding funds.

Unlike past negotiating inflection points, the reports from various media sources are generally consistent. The creditors have not budged. German Finance minister Wolfgang Schauble warned of the danger of an unintended default over the weekend, then walked it back a hair by saying that Germany would do everything it could to keep Greece in the Eurozone “under justifiable conditions. It must not fail because of us.” The German press also reported that Merkel and Tsipras spoke multiple times over the weekend.

Remember that Eurogroup head Jeoren Djisselbloem said at the last meeting at Riga on April 24 that there would be no deal at this meeting, so expectations were low. And even if there were a miraculous breakthrough, it would still take time to finalize language and get parliamentary approvals. The session is expected to be short, perhaps to keep the discussion civil. If you are at loggerheads, trying prolonging a conversation is unlikely to be productive. The Greek representatives will be Deputy Premier Giannis Dragasakis, Finance Minister Yanis Varoufakis and Deputy Foreign Minister Euclid Tsakalotos.

Neither side is backing down on its demands. From Ambrose Evans-Pritchard:

The only concession so far from the EU creditors is to reduce the target for Greece’s primary surplus from 4.5pc to 2pc of GDP next year…

The Greek newspaper Kathemirini reported that the Eurogroup is drawing up a Plan B that will be presented to Syriza as an “ultimatum”, offering nothing from its side to break the impasse.

To be clear, the “concession” of the lower primary surplus is symbolic, given that economists and policy-makers regarded the 4.5% target for next year to be insane.

The ruling Greek coalition appears to have finally woken up to the fact that it it cornered. As we indicated, the longer the creditors keep Greece in the sweatbox, the more its popularity is destined to decline.

While the latest polls still show Syriza as the most popular party, its support is now at 36%, a round trip from a huge surge after the government took office to back to where it stood when it was voted into office. Approval ratings of the government’s strategy have dropped precipitously from the very high levels reached shortly after the new government took office. As e pointed out early on, the best strategy for the creditors was simply to remain non-negotiable. Either Syriza would capitulate to their demands, or the government would lose support, paving the way for the return of a more complaint coalition. Syriza appears to realize that following the inertial path of trying to extend its negotiating runway does not work in its favor. Even if Greece were to pull a rabbit out of the hat and make the €750 million IMF payment, it has a total of €1.5 billion coming due to the IMF in June, which it almost certainly can’t satisfy if it fails to unlock the bailout funds.

This chart from the Telegraph shows the payments Greece has coming due over the next few months: 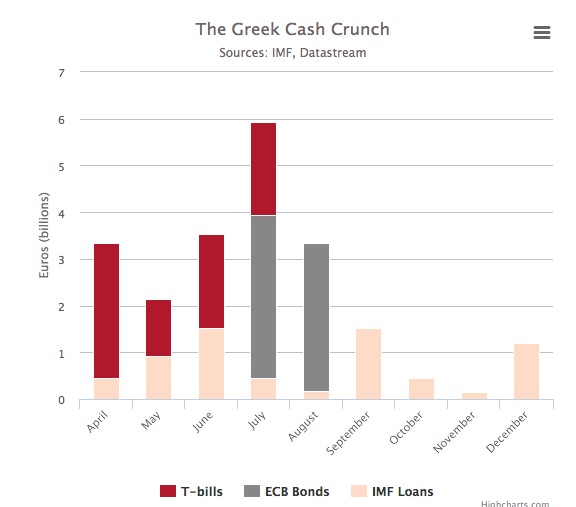 After an eight-hour cabinet meeting led by Prime Minister Alexis Tsipras regarding Monday’s crucial Eurogroup, there was no official statement other that the reiteration that the Greek government will not sign an agreement with creditors unless it is within the framework of the people’s mandate.

Greece is also, very late in the game, taking steps to limit bank withdrawals. The UK’s Times on May 5 said that the government was seeking ECB approval for a plan to tax cashpoint withdrawals and certain financial transactions, which they projected would raise as much as €180 million.

The situation is more fluid than it appears. The odds are high that blame game political calculations will win over sound policy. We’re already seeing jockeying starting to take place. Notice Schauble’s “justifiable conditions” caveat. He’s made clear repeatedly that he’d just as soon see Greece leave the Eurozone, but no one, particularly Merkel, wants to be seen to have pushed Greece out. Thus if Greece plays its cards so it can be depicted to have brought the default (and if it comes to that, an exit), that works to the advantage of the hardliners who see Greece as disposable and believe a default/possible exit can be made painful enough for the Greek people so as to make any other country that might contemplate leaving the Eurozone to see that alternative as too costly.

Despite the continued impasse, and virtual certainty of a default on Tuesday, the creditors have quite a lot of choices and options. For instance, despite the IMF’s tough talk about not giving Greece any grace period on a default, an IMF default is not as fine a trigger event at a private sector bond default. As the Financial Times explains:

But that hard line masks a little wiggle room created by the IMF’s own procedures. Under the official timeline plan, it is not until a month after a missed payment that the managing director formally notifies the board and not until three months afterwards that a formal statement to the outside world is expected to be made.

However, the IMF is also in disaster preparation mode, with the agency working with national banking regulators in states where Greek banks have operations to develop contingency plans for a Greek default. Keep in mind that board members of the ECB have stated repeatedly that while they’d prefer to see Greece remain in the Eurozone and an exit would be disruptive, they believe they have the tools to manage any fallout. Nevertheless, a German language report (hat tip Yannis Koutsomitis via Lambert) says the EU Council might have a special session to bypass the Eurogroup impasse. However, given that the IMF has been refusing to budge on structural reforms, and is now seeking to assign blame for the failure of its program in Greece to EU member states failing to write down debt as promised, it’s not clear than any such meeting could achieve a breakthrough.

Similarly, various sources, most recently Greek Reporter, have stated that Greece is hoping to get the Eurogroup to issue a general statement after the meeting that the two sides are making progress. There is a belief in some quarters that that sort of fig lead would help in preventing the ECB from executing on a threat that would almost certainly push the Greek banking system over the brink and force a disorderly Grexit, that of increasing collateral requirements at Greek banks in light of deterioration of the Greek economy.

Thus the creditor officialdom has the ability to keep Greece in play, um, in the sweatbox a while longer, particularly by making reassuring noises if Greece defaults on Tuesday. However, as we pointed out above, continuing discussions (assuming no willingness of the creditors to make new concessions) is of no help to Greece. It merely continues the squeeze on the government and the Eurocrats no doubt hope it will help in assigning blame to Greece.

Greece may have made a significant tactical error. Finance Minister Yanis Varoufakis stated last week that Greece would make the IMF payment due this week. If Greece were to default or make only a partial payment, that would mean the creditors could depict Greece as choosing not to meet its obligations, as opposed to failing out of necessity. Greece is, needless to say, trying to frame the issue as creditor rigidity rather than Greek intransigence, but given that the creditors have had the advantage in access to European media, the odds don’t favor them winning the blame game. From ekathimerini:

Greek officials have expressed the government’s intention to pay the IMF but according to sources some are in favor of not paying if the outcome of Monday’s Eurogroup is not satisfactory. Such a move would lead to Greece being declared bankrupt within a month with capital controls likely to be imposed on Greek banks much sooner than that to avert a bank run.

Mind you, if Greece defaults this week, we suspect it’s out of political rather than fiscal necessity. The government makes salary and pension payments at month end. So far, the new coalition has met those obligations. But paying the IMF and coming up short on pension or wage payments would dent support for Syriza, as would making payment in a scrip like Rob Parenteau’s TANs.

The Greek public is still deeply opposed to a Grexit.

Reader JTMcPhee cited the science fiction classic Dune in comments on an earlier Greece post. In the novel, the planetary ecologist, Liet Kynes, has been dumped in the desert with no protective gear, a sure death sentence. In a hallucination due to dehydration, his brilliant, control freak father lectures him. The quote: “Then, as his planet killed him, it occurred to Kynes that his father and all the other scientists were wrong, that the most persistent principles of the universe were accident and error.”

We’re likely to see those principles dominating the Greek drama over the coming weeks. Stay tuned.