Lambert here: “We know the way to Syntagma Square,” as it were.

After a Eurogroup meeting that appears to have not achieved much progress, and after Greece met its most recent payment due to the IMF drawing on its SDR accounts, the Greek Ministry of Finance published today the preliminary figures for budget execution over the period January – April 2015. There are positive signs, also on the revenue side, but the cash situation remains precarious ahead of forthcoming deadlines.

Figures confirm the pattern already observed last month (which I discussed here), with a marked improvement in the primary balance achieved mostly via expenditure cuts and a more limited improvement in revenues. 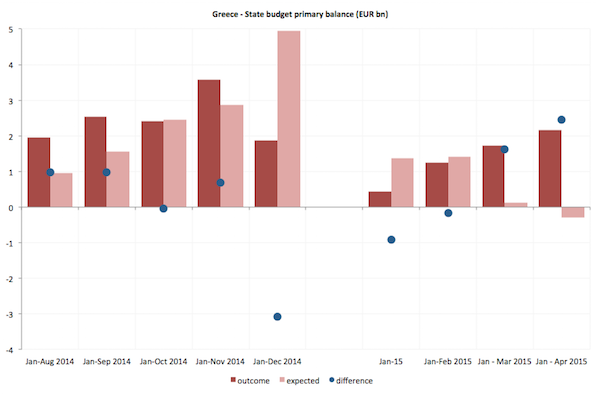 As for last month, the public investment budget’s net revenues played a key role in the improvement on the revenue side, over-performing the target by EUR 465 mn. However, the improvement in the ordinary revenues component observed last month is confirmed. Ordinary net revenues beat their target by EUR 494 mn this month, which may suggest that the revenues situation is slowly normalising. While on a cumulative basis ordinary budget net revenues are still short of target, the gap is now only EUR 92 mn compared to the EUR 584 mn undershooting recorded last month. 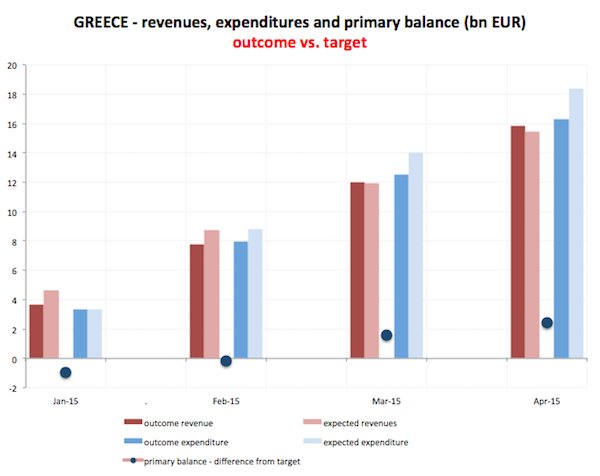 This data confirm the pattern clearly observed last month. The primary surplus is improving, mostly due to expenditure cuts (a significant part of which was delayed payments, according to the news). The limited improvement in ordinary revenues is important, as it may signal a slow normalisation on the revenue side, but the overall situation remains very shaky in light of approaching payment deadlines.

Greece yesterday met its EUR 745 mn payment due to the IMF by drawing on its own Special Drawing Rights (SDR) account. Reportedly, Greece’s SDR holdings were standing at EUR 700 mn at the end of March, and EUR 650 mn have been used to make this payment.

What Greece did is effectively akin to taking a loan from the Fund to repay the Fund itself. While clever in the short-term, it has consequences. Whenever a member’s SDR holdings are below its allocation, the member incurs a net interest obligation. This interest rate has to be paid quarterly and it is determined weekly based on a weighted average of representative interest rates on 3-month debt in the money markets of the four SDR basket currencies (i.e., the U.S. dollar, Japanese yen, euro, and pound sterling). The timeline for replacing the used SDR holdings is unclear, but Kathimerini reported that the holdings would need to be reconstructed “in a short period of time”.

While buying time in the immediate short term, the move could therefore put pressure on Greece in the next month, when it already faces repayments of about EUR 1.5 bn to the IMF. On top of that, Greece  needs to pay about 2.5bn in public sector salaries, pensions insurance, health and social protection every month, and reports in the Wall Street Journal suggests there could be a shortfall of about EUR 500 mn in May already, let alone June.

The government plan to draw on local governments’ reserves seems to be failing, as reports suggest that so far, only 2 out of 325 mayors across Greece have accepted to hand over their spare cash. In the meantime, the capital flight is reportedly worsening (with Greek savers withdrawing their money and buying fixed assets such as cars) and the ECB is considering raising haircuts from around 23% currently to between 44% and 80%, which bank officials say would effectively deprive the local system of access to Eurosystem liquidity. All things considered, it really looks like we are in for a very hot summer.