The basic truth about broadband that cable companies want to hide Vox. Reslic, from article: “The American cities that are delivering best-in-the-world speeds at bargain prices are precisely the cities that aren’t relying on Verizon, AT&T, Comcast, Time-Warner, etc. to run their infrastructure.”

How Many Ways Can You Hide A Bribe? The Best Of The FIFA Indictment Gawker

Only Greece Can End Its ‘Groundhog Day’ Misery Bloomberg

Too big to jail?: Why does the UK legal system fail to prosecute bank fraud? Contributoria. From February, but still a fine piece.

Exclusive: Russia masses heavy firepower on border with Ukraine – witness Reuters. Rather weird to call a Reuters reporter a witness.

Terrorist Risks by City, According to Actual Data Bruce Schnier

Is Progressivism in the Eye of the Beholder? Joe Firestone, New Economic Persepctives

Christiegate: Christie Goes on Expletive-Filled Rant in Front of Large Crowd Daily Kos (Judy B). And it sure looks like it was provoked by David Sirota’s reporting!

Finance must blow the whistle on foul play Gillian Tett, Financial Times. Aiee, Tett needs to go beyond apple pie and motherhood. The main whistleblower in this case, Eric Ben-Artzi, probably will not get adequate compensation given the weak fines for the loss of his finance career.

The Federal Reserve Board Is Much More Likely to Take Your Job Than a Robot, so Naturally the Media Are Talking About Robots Dean Baker. Touche!

http://www.cepr.net/blogs/beat-the-press/national-public-radio-tries-to-scare-people-about-the-deficit CEPR (Lydia) FAIR ran this under a better title: Look, a Deficit!: How NPR Distracts You From Issues That Will Actually Affect Your Life

New Reality Show Exploits Poor Families, Makes Them Grovel Over the Thing They Need Most Alternet

Antidote du jour (Lance N). Gerald de Nerval had a lobster he’d take around Paris using a ribbon as a leash (knowing how long lobsters live out of the ocean, he must have had a series). His explanation?

Why should a lobster be any more ridiculous than a dog? Or a cat, or a gazelle, or a lion, or any other animal that one chooses to take for a walk? I have a liking for lobsters. They are peaceful, serious creatures. They know the secrets of the sea, they don’t bark, and they don’t gobble up your monadic privacy like dogs do. And Goethe had an aversion to dogs, and he wasn’t mad! 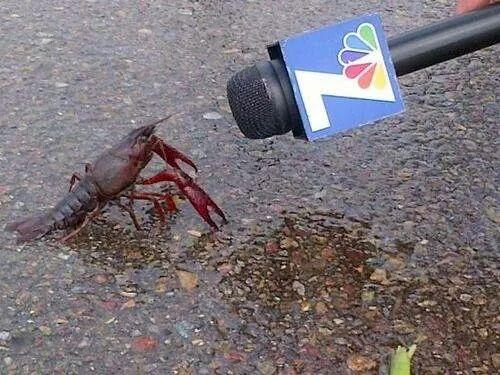