Yves here. It’s now becoming cutting edge conventional wisdom that oversized financial service industries are bad for your economic health. Yet the media is only occasionally and timidly is willing to say that what is good for Jamie Dimon is bad for the rest of us.

I cited the IMF study referenced here in an older post. It’s good to see the OECD reaching similar conclusions.

More and more studies are coming to the conclusion that having a large financial sector is actually productivity destroying for an economy and slows its growth.

Last month, the International Monetary Fund (IMF) released a report concluding that the larger a country’s financial sector, the bigger its drain on total factor productivity and the greater the risk of economic and financial stability: 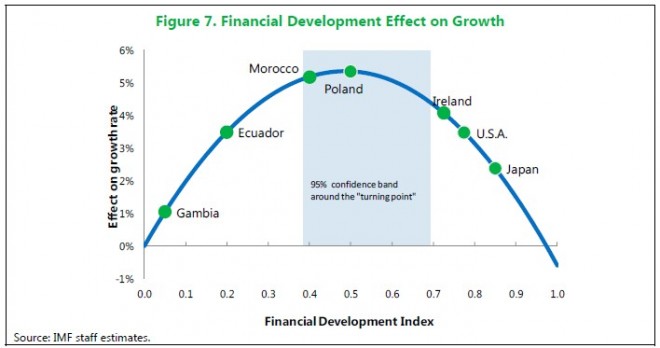 When it proceeds too fast, deepening financial institutions can lead to economic and financial instability. It encourages greater risk-taking and high leverage, if poorly regulated and supervised. In other words, when it comes to financial deepening, there are speed limits…

This study was followed by research released earlier this month from economists Stephen Cecchetti and Enisse Kharroubi, who concluded that faster growth in finance is bad for real economic growth. From Business Spectator’s Callam Pickering: 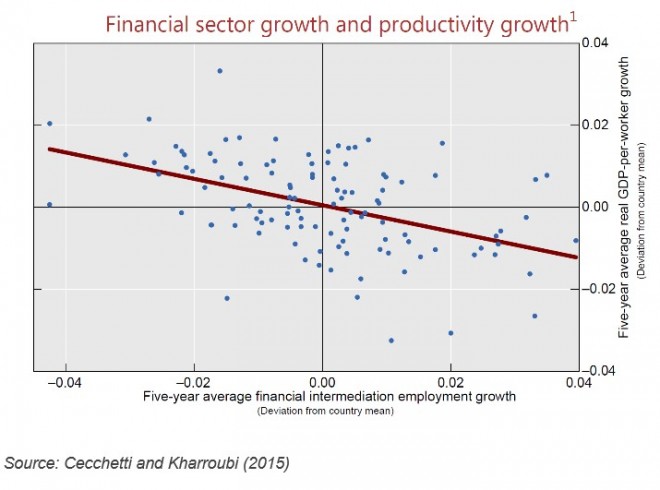 But the financial sector competes with other sectors of the economy for resources. It competes for physical capital — such as land and buildings — but also for skilled workers. There is a generation of Americans, Europeans and Australians who have decided to become investment bankers rather than teachers, scientists, or even entrepreneurs.

Yesterday, the OECD entered the fray, releasing a new report arguing that the bloated banking systems in most developed countries are sucking growth out of their economies as well as increasing inequality. The ABC’s Michael Janda has summarised the results:

“The empirical analysis documents a link from financial deregulation, measured by an aggregate indicator, to credit expansion and slower growth,” the report found.

“The data indicate that credit intermediaries may have developed in most OECD countries to a point where further expansion is at the margin associated with slower long-term economic growth and greater economic inequality”.

…when loans exceed around 60 per cent of gross domestic product (a key measure of an economy’s output) then further lending actually dents long-term growth.

“An increase from 100 to 110 per cent of GDP is linked to a 0.25 percentage point reduction in economic growth,” the OECD observed.

Janda notes that the results are bad news for Australia:

According to the latest Reserve Bank data, released earlier this month, Australia’s credit to nominal GDP ratio is above 140 per cent, putting it off the scale of the OECD’s chart…

That implies that the nation loses about a third of a percentage point of economic growth due to its bloated banking sector and excessive debt levels.

There is even worse news for Australia, where it is a surge in lending to households that has driven credit higher…

“The data show that households’ borrowing has a negative marginal link with growth that is twice as large as firms’,” the report noted.

Financial sector workers have been found to earn a premium over workers in other industries with similar levels of education and experience.

That disparity is also believed to be one of the reasons why a larger financial sector actually inhibits economic growth.

“High wages can draw the most talented workers into the financial sector where they may not contribute as much to economic growth as compared to jobs in sectors with greater potential for productive innovation,” the OECD report hypothesised.

I won’t go over the many reasons why I agree that Australia’s bloated financial system is killing the productive economy, since these were explained in detail in Monday’s post.

All I will say is that Australia’s financial sector has more than doubled its share of the Australian economy since the mid-1980s: 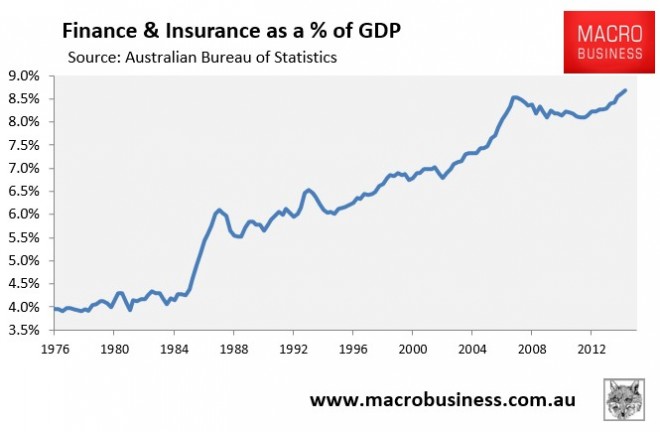 Meanwhile, it has channeled lending away from productive business into unproductive houses (mostly pre-existing): 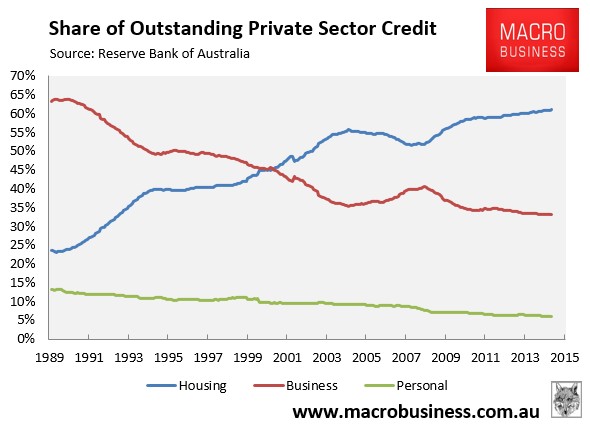 You can join the dots on that.