Yves here. I’m old enough to remember 1987. M&A activity was hot and was clearly the biggest driver of stock prices before the crash.

Global growth is languishing, corporate revenues too, but CEOs are trying to show they can grow their companies the quick and easy way. Cheap debt is sloshing through the system while yield-hungry investors offer their first-born to earn 5%. And this cheap debt along with vertigo-inducing stock valuations have created the largest M&A boom the US has ever seen, with May setting an all-time record.

There may be a sense of desperation among CEOs as the Fed’s cacophony evokes interest rate increases, the first since July 2006. So companies are issuing all kinds of cheap debt while they still can. Bond issuance has totaled over $100 billion per month in the US for the past four months, the longest such streak ever, according to Bank of America Merrill Lynch.

And that record issuance doesn’t account for the booming “reverse Yankee issuance,” where US corporations take advantage of the negative-yield absurdity Draghi has concocted in Europe and issue euro-denominated bonds into European markets.

“Issuers should realize that the window to lock in low long-term yields for any purpose is closing,” Hans Mikkelsen, a senior strategist at BofA, wrote in a note, according to the Financial Times. And so in May, M&A deals hit an all-time record of $243 billion. 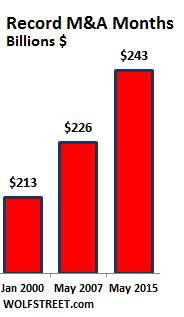 The prior two record months: May 2007 ($226 billion) and January 2000 ($213 billion). Not long after those records were set, markets crashed with spectacular results.

May included Charter’s $90-billion acquisition of Time Warner Cable and Bright House. Charter will issue around $30 billion in junk-rated debt to accomplish this, likely the second largest junk-debt deal ever, behind that of TXU in October 2007, which is now in bankruptcy [read… Junk-Debt Apocalypse Later].

May also includes Avago’s $37-billion acquisition of Broadcom, the largest tech deal since the dotcom bubble blew up.

This pressure to buy drives up prices and premiums, and the “synergies” needed to make these deals work even on paper will be harder and harder to come by. “Synergies” is corporate speak for cost-cutting, so mass layoffs, which will be announced with fanfare to push the shares higher. For these companies, it seems the only way to grow revenues is to acquire other companies, and the only way to grow profits is to cut costs. It’s not productive, hurts the economy, and mucks up the future of the company. But what the heck, it looks good on paper.

These deals are financed by a mix of shares, new debt, and cash raised with prior debt issuance – the “dry powder.” Much of this debt is in form of junk bonds and junk-rated leveraged loans, which banks then either sell to loan funds or craftily slice and dice and fabricate into highly-rated collateralized loan obligations (CLOs). Some of these CLOs are then put through the Wall Street sausage maker again to reemerge as tipple-A rated bonds denominated in yen for the Japanese market.

Loading up overleveraged junk-rated companies with more debt – even if it’s still cheap – has consequences down the road: US default rates are creeping up, hitting 2% in May, the highest in 17 months, according to S&P Capital IQ’s LCD:

The report forecast a default rate of 2.5% by December 2015 and 2.8% by March 2016, assuming cheap debt continues to flow without limits. Once the money dries up, defaults will soar. Layoffs and defaults are the bitter aftertaste of M&A booms.

When our corporate heroes are not busy buying each other’s shares, they’re buying their own shares. In April, S&P 500 companies announced an all-time record of $133 billion in buybacks. It’s attracting the ire of the largest money managers in the world.

While some defend the buyback practice as a method of returning cash to shareholders, others, including my colleague Larry Fink, have argued that some companies today are focusing on maximizing short-term shareholder value at the expense of investing in the future.

In my opinion, today’s boom is just one economic distortion created by the Federal Reserve’s excessively accommodative monetary policy.

The boom is, in essence, a response to today’s extraordinarily low interest rates….

Using debt to fund buybacks and dividends eventually crowds out long-term investment in the company’s core business and threatens its credit quality, which is, according to Rieder, “what we are seeing today.”

Oh, and we almost forgot, there are other consequences. Blackrock’s Rieder:

Indeed, the global economy is witnessing a massive redistribution of wealth and income with borrowers, equity shareholders, and short-term investors benefiting; and savers, bondholders and longer-term investors being placed at risk.