If you did have not visited the site in the last couple of days, please read our post on our site policy change.

What kind of happiness should we strive for? Cathy O’Neil. From last week. I suspect Buddhists would have trouble with these ideas, since they still involve striving or pleasure-seeking (the “striving” sounds discordant). Would be curious to get reactions.

NYT: Turns Out Atticus Is a Racist in New Harper Lee Novel Gawker

Thousands stranded as Indonesia’s Bali airport shut after volcanic eruption Reuters (furzy mouse). What a nightmare. I am one of the very few people who had a happy volcano refugee experience in London in 2010, when Richard Smith and his wife let me stay on in their flat until I could depart. I can’t imagine what it would be like to be stranded.

Gaudí’s Great Temple New York Review of Books. I was lucky enough to visit the Sagrada Família on a Sunday morning, when it was not very busy, on a sunny day. What a glorious building.

Crippled Greece yields to overwhelming power as deal looms Ambrose Evans-Prtichard, Telegraph. If no deal, “We’re going to see severe shortages of basic food in Greece in less than a month.”

Greek debt crisis: MPs approve bailout plan but some Syriza MPs rebel – as it happened Guardian (furzy mouse). A recap of the debate and votes.

Greece Faces Showdown With Creditors as Lawmakers Back Bailout Bloomberg

Yanis Varoufakis, who is the MP for the district with the largest number of voters in all of Greece, did not show up to the vote. Here’s his excuse. You can run it through Google Translate

What was the point of Tsipras referendum? Paul Mason. Wow, this is strained. Start with the “flush out that clear threat” part. Where has Mason been all these years? That threat was used successfully against Ireland. That’s why its government absorbed the ginormous liabilities of its banks even though Ireland had no deposit guarantee. It was also used against Cyprus, which was forced into a bank holiday and a depositor haircut (it had the alternative of Euroexit too but never considered that seriously since its banking system was not anywhere near as troubled as Greece’s is).

Opinion: Why a Grexit Must Be Avoided Der Spiegel. Important. The first line tells you why we may still have a Grexit despite Greece having prostrated itself: “Anyone who opposes the prospect of a Grexit can feel a little lonely in Germany these days.”

Different line-up on Grexit from Handelsblatt. Belgians shift camp. Austria neutral @AmbroseEP. Important. An ever clearer reason why Grexit is likely. It requires all 19 Eurozone states to approve a deal. Look at the number of holdouts. Unless Merkel and the US spend a shitload of political capital, it’s hard to see how this changes, particularly in a couple of days.

Putin: Where was EU when Greek crisis was evolving? RT

‘We underestimated their power’: Greek government insider lifts the lid on five months of ‘humiliation’ and ‘blackmail’ Mediapart. Sad and revealing. When you are negotiating and engaged in diplomacy, you don’t have the luxury of having emotional reactions like experiencing humiliation. This is also why Juncker’s recent public wallowing in self pity is similarly really shocking.

‘We’re living the Thug Life’: refugees stuck on Greek border have nothing left to lose Guradian

The Shadow of Brest-Litovsk (with image, tweets) · billmon1 Storify

The Risks of Mandating Backdoors in Encryption Products Bruce Schnier

When the FBI Went After ‘Mad’ Magazine Mental Floss

Hillary Clinton’s push on gun control marks a shift in presidential politics Washington Post. Translation: Hillary’s election mavens have figured out gun lovers will never vote for her, and this stance will shore up her “progressive” claims

Join Occupy the SEC in Urging the President and the Senate to Appoint a Progressive as SEC Commissioner! Petition2Congress. Please sign!

Who Runs the Fed? Dissent. There is one part I quibble with. The boards of the regional Feds are not at all like private company boards. They could never force out a Fed president, for starters, and they play almost no oversight role. So the result is actually worse: the regional Feds are not properly governed at all, but get some pathetic oversight from both the Board of Governors and some intervention from the private boards (the private boards do nominate the candidate for the next regional Fed president, which the BoG usually accepts. While that is appallingly obvious, the BoG would almost certainly come up with an equally cronyistic selection process). In practice, the regional Fed boards are almost entirely advisory in nature. So the regional Feds operate in a banking bubble with virtually no accountability.

Sorry, but the jobless future isn’t a Luddite fallacy. We need to be ready. Vivek Wadhwa (David L)

Antidote du jour. @World: “A mother bear and her cub taking a dip in Kurile Lake in Russia.” 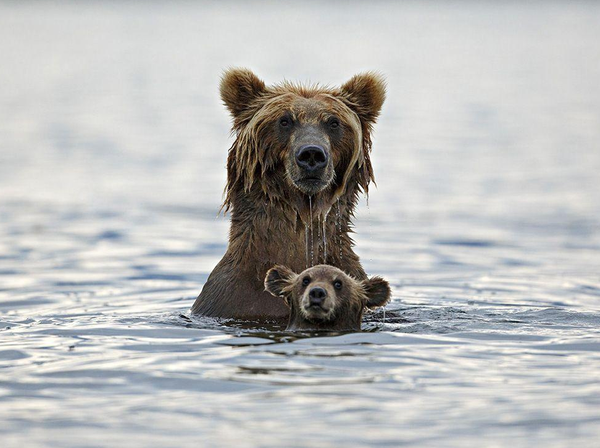