Lambert here: As ever, the scandal is what’s legal. Ka-ching.

By Steve Horn, a Madison, WI-based Research Fellow for DeSmogBlog and a freelance investigative journalist. He previously was a reporter and researcher at the Center for Media and Democracy. Originally published at DeSmogBlog.

On August 4, the U.S. Appeals Court for the 10th Circuit shot down the Sierra Club’s petition for rehearing motion for the southern leg of TransCanada’s Keystone XL tar sands export pipeline. The decision effectively writes the final chapter of a years-long legal battle in federal courts.

But one of the three judges who made the ruling, Bobby Ray Baldock — a Ronald Reagan nominee — has tens of thousands of dollars invested in royalties for oil companies with a major stake in tar sands production in Alberta. And his fellow Reagan nominee in the Western District of Oklahoma predecessor case, David Russell, also has skin in the oil investments game.

The disclosures raise questions concerning legal objectivity, or potential lack thereof, for the Judges. They also raise questions about whether these Judges — privy to sensitive and often confidential legal details about oil companies involved in lawsuits in a Court located in the heart and soul of oil country — overstepped ethical bounds.

Among the companies listed on Judge Baldock’s financial disclosure located on Judicial Watch’s website for the 2012 reporting year — the year Sierra Club filed its lawsuit — are some with a financial stake in tar sands production. They include ExxonMobil subsidiary XTO Energy, BP, ConocoPhillips, Sunoco and Kinder Morgan subsidiary El Paso Production. 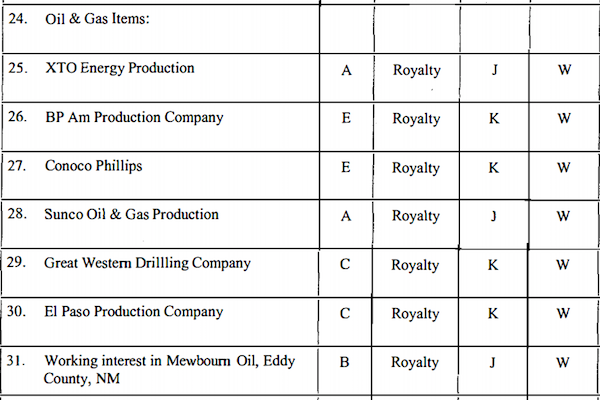 The “j” on the forms means a value of $15,000 or less, while “k” means $15,000-$50,000. Russell’s investment portfolio for the 2011 reporting year also included tar sands-related investments in companies ranging from Continental Resources, Plains All American and ONEOK Partners. 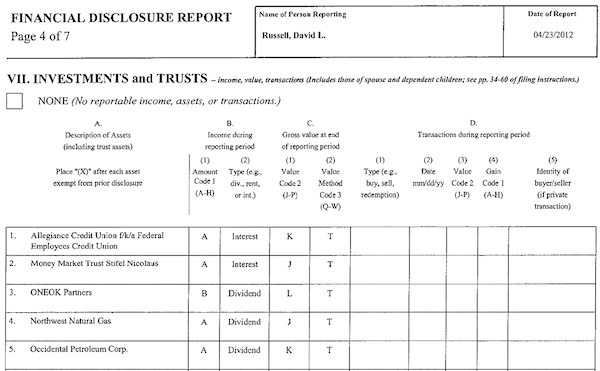 Appeals Court Judge Robert E. Bacharach — a President Obama appointeee in 2012 — also has his 2012 financial disclosure report online courtesy of Judicial Watch, showing he has no investments tied to the Alberta tar sands. Judge Carolyn B. McHugh, a 2013 Obama appointee, has no forms online to date.

A review of Baldock’s forms available on Judicial Watch’s website dating back to 2003 show that starting in 2005, Baldock began investing in all of the same oil companies he has investments in now. Russell had investments in Continental dating back to 2003 and held onto dividends for almost a decade. Neither Baldock nor Russell responded to a request for comment sent by DeSmog about whether they dropped their industry-related investments post-2012.

Financial disclosure reports from 2012 for the three judges who decided the 10th Circuit Court’s portion of the case in October 2013 denying Sierra Club the injunction it requested to get TransCanada to stop builidng Keystone XL South show no oil or gas industry investments.

DeSmog has submitted a request for financial disclosure reports for all seven of the judges who issued rulings for Keystone XL South for both 2013 and 2014.

Continental Resources at one point signed a deal with TransCanada to carry 35,000 barrels per day of oil obtained via hydraulic fracturing (“fracking”) from North Dakota’s Bakken Shale to market as an appendage of Keystone XL called the Bakken Marketlink. 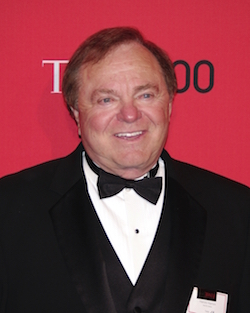 Bakken Marketlink relies on the northern leg of Keystone XL though, which has yet to open shop, and which Hamm now calls “irrelevant.” Not that he cares either, with 90-percent of his company’s oil now moving by rail. Most pertinent to Judge Russell, Continental made a fat wad of cash from Keystone XL South opening up for business.

“Hamm says his lobby group received a written confirmation from TransCanada it would build the southern leg of the pipeline first, a step since approved by the Obama administration while the northern leg awaits permission,” Reuters wrote in a September 2012 investigation. “The southern leg should help drain a glut of crude in the Midwest and help Continental earn more on its oil.”

“Between 2010 and mid-2012, pipeline shipments out of the Midwest were relatively flat at about 225,000 b/d until the reversal of the [Enbridge, Enterprise Product Partners jointly-owned] Seaway Pipeline, which now transports crude oil from Cushing, Oklahoma, to the Gulf Coast,” explained Commodity Online.

“Since then, Seaway has been expanded, and other pipelines, such as TransCanada’s [Keystone XL South], were built to carry crude oil out of the Midwest. By May 2015, pipeline shipments from the Midwest reached 1.3 million b/d, the highest since EIA began collecting pipeline shipment data in 1986.”

ONEOK, which bought Koch Industries’ natural gas liquids unit in July 2005, also has a direct connection with TransCanada. The two companies jointly own the Northern Border Pipeline on a 50-50 basis, a line that brings gas extracted from the “Western Canadian Sedimentary Basin to a growing U.S. Midwest market” according to TransCanada’s website.

The tar sands boom in Canada has served as a boon to gas drillers in the Western Canadian Sedimentary Basin, with huge amounts of gas used to extract the tar sands and morph them into dilbit capable of flowing in pipelines.

So although Northern Border flows to midwest markets, it still locks in demand for gas drilling, with much of that gas used to enable huge amounts of dilbit to flow through TransCanada’s Keystone Pipeline System.

The U.S. Courts seemingly oppose this type of conduct. But as a 2014 investigation published by the Center for Public Intregity explained, it is far from unprecedented, and Judges seldom recuse themselves nor face punishment.

A judge should disqualify himself or herself, explains 28 U.S. Code § 455, when “He knows that he, individually or as a fiduciary, or his spouse or minor child residing in his household, has a financial interest in the subject matter in controversy or in a party to the proceeding, or any other interest that could be substantially affected by the outcome of the proceeding”

For the case itself, Sierra Club attorney Doug Hayes had argued the case should be reheard because of what it argues is the dangerous precedent it would set if the current ruling stood.

It “affects many other projects nationwide, and would allow the Corps to continue approving massive crude oil pipelines under Nationwide Permit 12 without ever analyzing their impacts, such as the risks and impacts of oil spills,” wrote Hayes, further arguing that the status quo “would permit agencies to avoid NEPA compliance by claiming ignorance of the law.” 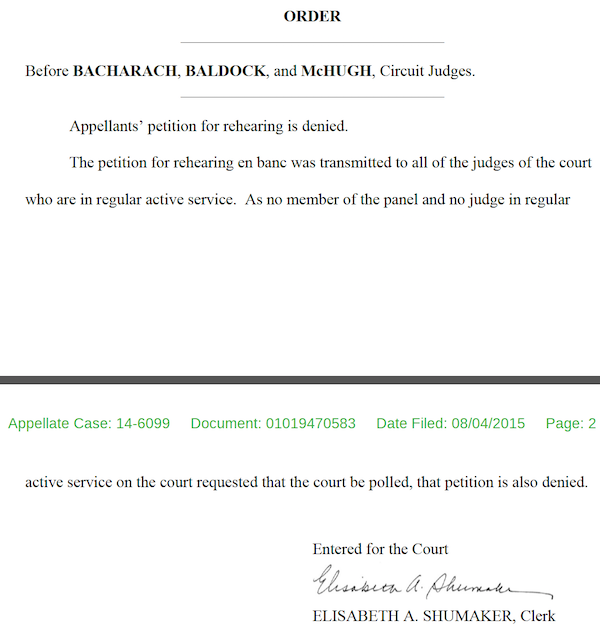 The decision “sets dire precedent,” wrote Hayes, and “involves issues of exceptional importance, as the holding allows other crude oil pipelines to be built with no consideration of oil spills or other impacts as required by NEPA. Prior to this case, the Corps had never before used NWP 12 to approve massive crude oil pipelines in this manner. Now, the Corps is approving other pipelines [he later pointed to Flanagan South] using NWP 12 without any project-specific NEPA analysis.”

Add to this “dire precedent,” then, the fact that at least two of the judges who handled Keystone XL South cases stand to gain financially from the rulings they issued and you have a perfect storm.